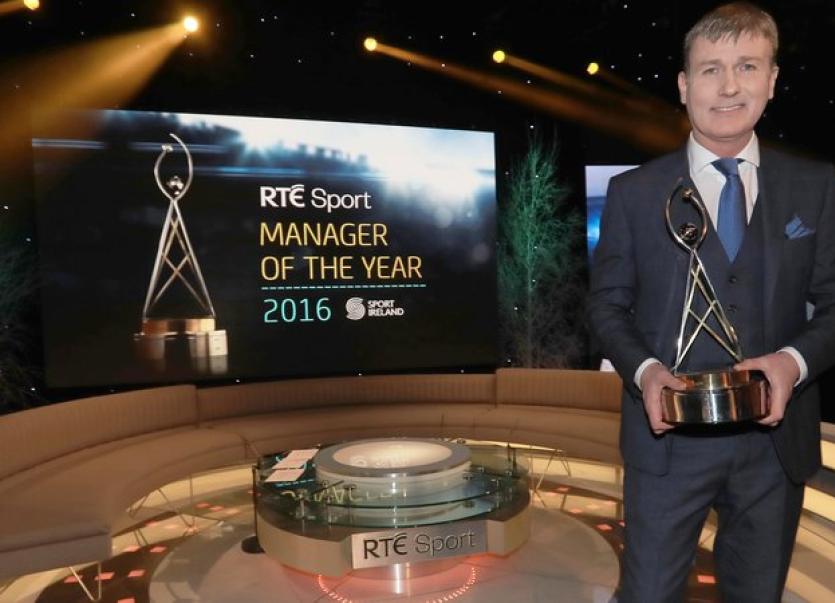 Stephen Kenny , the RTE Sport Manager of the Year 2016

Dundalk manager Stephen Kenny paid tribute to his team last night when he picked up the RTE Sport Manager of the Year award.

“I accept it on behalf of the Dundalk players,” Kenny said on the night. “The players have been magnificent over the last two-and-a-half years, particularly this year when we’ve had unprecedented success.”

Stephen Kenny joined Dundalk FC in 2012, when the club was at the bottom of the league and on the brink of extinction, and this year he guided them to capture the SSE Airtricity League Premier Division for the third season in a row, as well as a superb run in the FAI Cup and in European Competitions.

The Dundalk manager showed that he is not sitting on his laurels and is already looking ahead to next season.

“Obviously we qualified for the Europa League and had a great run this year and the next step is the Champions League. We have to think like that,” he said.

Other winners at this year’s RTE Sports Awards included Conor McGregor who was named the RTE Sport Sportsperson of the Year and the O'Donovan brothers who were named RTE Sport Team of the Year. Poignantly, the  late Munster head coach and former Munster and Ireland rugby star Anthony Foley was inducted into the Hall of Fame.

Keep up to date with the latest news from Dundalk FC on dundalkdemocrat.ie/sport