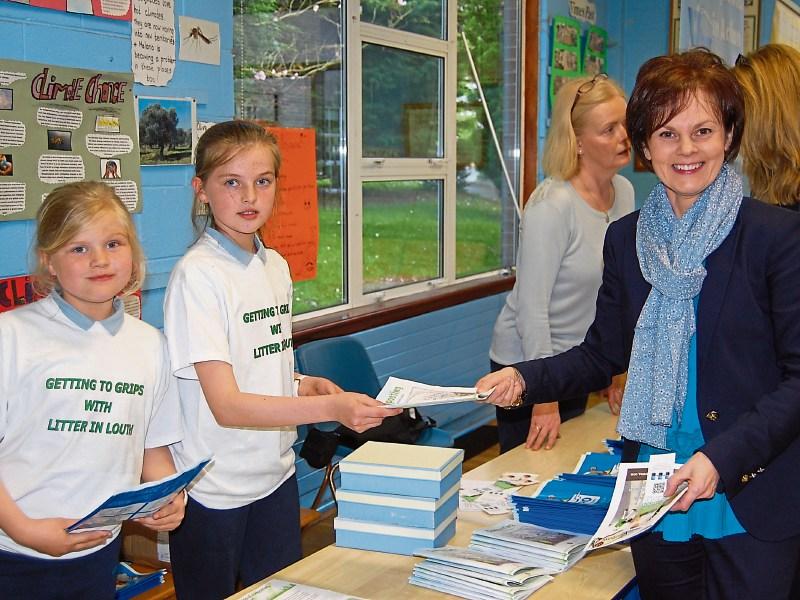 The issue of waste prevention has become increasingly important, not solely in the national Tidy Towns competition, but as a means of ensuring sustainability in households and communities throughout Ireland.

Dromiskin Tidy Towns and Dromiskin Junior Tidy Towns were delighted to hold a Waste Prevention information evening recently where the lessons learned in the school environment, through the Green School Programme, were brought into the wider community in an effort to encourage all residents to become more sustainable in their daily lives.

Dromiskin Tidy Towns took the opportunity to launch their new 12 page brochure Dromiskin Waging War on Waste – Prevention is better than Cure, at the event which was very well received and widely distributed to those in attendance.

The brochure is packed with advice and tips on how to save the environment and to save money across the key headings of waste, energy, water and travel and serves as a useful point of reference for householders in the community into the future in terms of waste prevention.

The brochure is also available on the Dromiskin Tidy Towns website and will be distributed by the Junior Tidy Towns members to householders in housing estates in the village in the coming weeks.

Members of the Junior Tidy Towns Committee were on hand to discuss with those in attendance how simple improvements can be made that will reduce the carbon footprint of the community while saving individual residents money and the advice was gratefully received and taken on board by many householders.

The Tidy Towns Committee took the opportunity to redistribute their Guide to Garbage publication, their 21 tips for the 21st Century brochure and, given the fast approach of the Christmas season, distributed a locally produced Stop Food Waste Christmas Recipe Leaflet to encourage householders to be innovative in the reuse, rather than the disposal of, excess food over the festive season.

Eye-catching displays were in place during the event on the subjects of water, energy and travel as well as reminding those in attendance to Rethink, Reduce, Reuse, Repair, Restore, and Recycle. The opportunity was also taken to promote the recently introduced brown bin service in the community with advice provided to residents on how to take full advantage of this service to deal with their kitchen and garden waste in an appropriate manner with encouragement given to eliminate a portion of this waste from the waste stream by home composting.