Maritime Disaster: A night to remember at Carlingford Lough 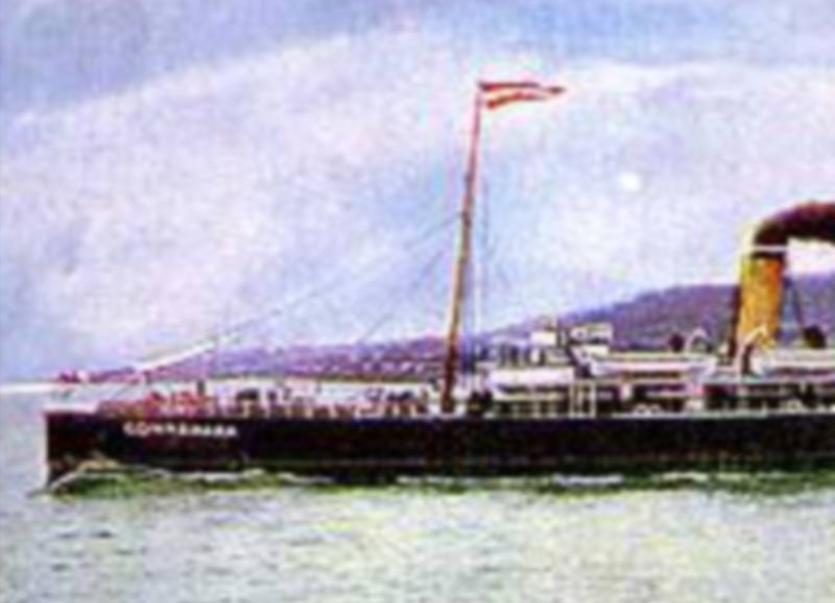 Thursday of this week, November 3, marks the 100th anniversary of the worst maritime disaster to take place along the Louth-Down coastline when two relatively small ships were in collision at the entrance to Carlingford Louth at about 8.30 pm. which cost the lives of nearly 100 persons. The accident was commemorated in Greenore over the past summer and at the present time there are a series of lectures and other events taking place in Cooley and on the north side of the Louth in County Down. The most noteworthy event being a play performed in Omeath this week which I am told is an excellent production!

There were many stories about the tragedy when I was a boy but, it seems, it was not widely reported at the time it happened because it occurred at the height of the Great War, as World War 1 was then known, and reporting would have been greatly restricted by censorship! One of the best accounts I have come across is an article written by the late Paddy Power of Bachelors'Walk who was a very active member of the County Louth Archaeological and Historical Society which was written for 1975-76 edition of Tempest's Annual.

What basically happened was that, during a storm, a 459 ton collier called The Retriever on its way into Newry struck the 833 ton passenger steamer The Connemara, sailing between Greenore and Holyhead, cutting it almost in two, at the 'The Carlingford Cut', a narrow channel at the entrance to Carlingford Lough. The Connemara, a vessel owned by the London and North Western Railway Company which sailed regularly out of Greenore, sank within a few minutes and its entire compliment of around 85 passengers and crew were lost. The Retriever, was damaged at the bow and took about 15 minutes to sink. It sent up distress signals but, because of the storm, they were not seen by any service that might have been able to help.

According to the Shipwreck Inventory of Ireland, a total of 94 lives were lost but Charlie McCarthy, who has researched the story over the years, tells me that it might have been 95 as the exact number on board the Connemara may never be known. The Shipwreck Inventory states that the only survivor of that collision was a 14 year old cabin boy on the Retriever named James Boyle. Which turns out to be incorrect because this James Boyle from Warrenpoint gave evidence at an inquest in Kikeel courthouse on November 6, 1916 and swore that he was 21 and an able seaman.

Boyle was still alive when I first heard the story back in the 1940s and I recalled standing on the sea front balcony at the old Greenore Hotel and being told by a local man that Boyle had survived by holding on to the tail of a cow that had been on the Connemara. Power's article proves also to be incorrect as Boyle's evidence at the inquest was that he had managed to get into a lifeboat from the Retriever which over-turned as it reached the Down shore and that he was helped out of the surf by two local men who had been alerted by the flares sent up by the Retriever. Only a few of the cattle on the ship survived, most of them being killed on the rocks while trying to swim ashore.

Another aspect of the story which I was told when a boy which Power's article shows to be incorrect is that neither vessel was showing their running lights when the collision occurred. This was based in the belief that the ships' captains had been ordered not to show lights on the Irish Sea for fear that they might be spotted by a German submarine; which proved to be the cause of the sinking of the Dundalk, which the loss of 19 lives, off the Isle of Man two years later in October 1918. Power's account states that Boyle told the inquest that they had sighted the Connemara when she was between the lighthouse and Greenore when they were about half a mile apart and both appeared to be on their proper course. Both had their lights on!

Another part of the story that I had heard over seventy years ago was that the Captain of the Connemara believed that his vessel had the right of way through the Cut because it was a channel that had been blasted by the railway engineers when Greenore Port was being constructed in 1870. Again this appears to be totally incorrect as it seems that the lookouts on the Connemara did not realise there was going to be a collision until the vessels came together. Around 6 pm. the gale force wind storm caused the coal to shift in the hold of the Retriever, causing a list to starboard.

A Board of Trade Enquiry held in Belfast in March 1971 found that that the disaster was solely caused by 'improper navigation by the Retriever'.

Which all goes to show that you cannot believe everything you hear; nor read on the internet, on social media and not even in newspaper accounts!