McCrytal disappointed at missing out on medal 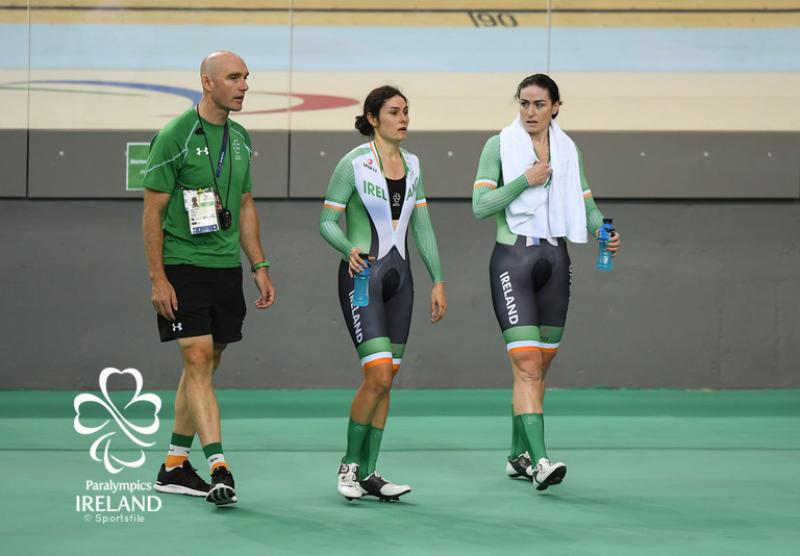 The women’s tandem of Katie-George Dunlevy and Dundalk's Eve McCrystal have finished 5th in the Women’s B Tandem Individual Pursuit at the Paralympic Games with a personal best time at sea level of 3.33.471.

With only four bikes progressing to the medal ride-offs it was disappointment for the Irish duo who were sitting in fourth qualifying position with one lap to go. GB’s Lora Turnham and Corrine Hall were the fastest finishers with a Paralympic Record of 3.27.460; in the gold medal final they became the Paralympic Champions ahead of Emma Foy and Laura Thompson of New Zealand. The second Great Britain pairing of Sophie Thornhill and Helen Scott won the bronze medal ahead of New Zealand. In the Men’s B Tandem Kilo Damien Vereker and Séan Hahessy finished in 8th place with a personal best of 1.06.370, gold went to the Netherlands with Great Britain and German taking silver and bronze.

The women’s tandem had a steady start sitting in 7thspot at the 1km mark, before gradually moving up the rankings. In the last 500m they dipped into 4thplace, a position that would have qualified them for the bronze medal ride off, however, unfortunately in the closing lap they trailed the New Zealand bike, finishing an agonising 0.173 seconds outside the fourth and final qualifying spot.

Speaking after the race Dunlevy and McCrystal were disappointed with their finishing position; “We’re disappointed. We’re here to get in the medal ride-off, for gold and silver; we believed we could do it. We were aiming to get a personal best today, but it wasn’t good enough on the day. We train on the track when we can, and go to camps in Majorca, but it does go back to not having that velodrome at home. It would make such a difference if we had one, there’s only so much you can do with limited time.

"We were up against two nations who train full time in the velodrome, hopefully our advantage will be the time trial [on the road]; it doesn’t cost to train on an open road. Believe me Neill [Delahaye – coach] gives us a programme to get us here race fit and ready, and we got a two and a half second PB which is amazing for us, but it’s just that the top four are fulltime training on a velodrome.”