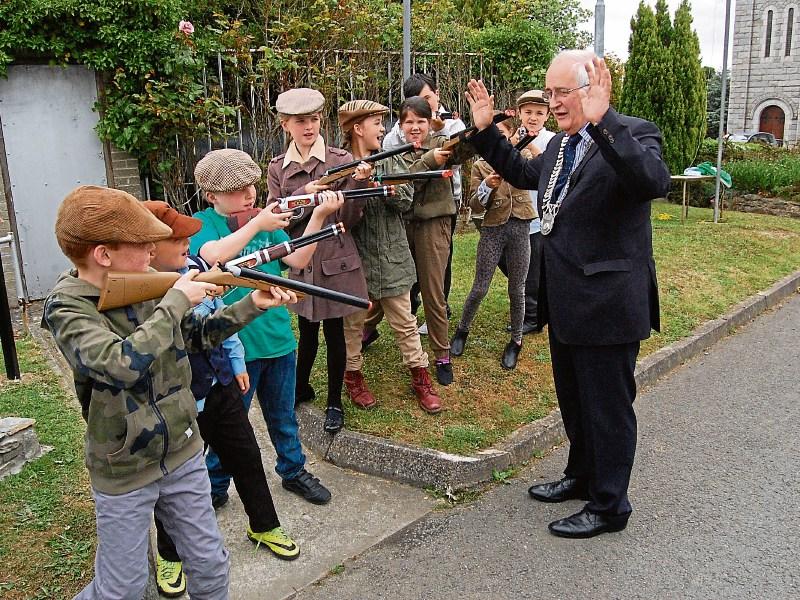 The sculpture was created by the talented Dromiskin artist and craftsman Seamus McArdle. It is and made almost entirely from the metal of recycled chairs and tables no longer required by the school. The detail in this piece has to be seen to be believed.

At the centre of the sculpture stands the harp where seven studs on its bow honours the seven signatories of the Proclamation. On its spine a further nine studs represent the other nine executed volunteers.

The crosses on either side reflect the Christian faith of many of the participants. The left hand side is topped by a cannon ball, the right by a gun barrel, recognising death on both sides of the conflict.

The harp, the emblem of our new state, carries the dove with olive branch - a symbol of peace desired throughout the land.

Cllr Peter Savage said he was delighted to be able to officiate at this very important local event. He recalled that his first community based duty as chair was in Dromiskin to unveil the Ginnety Pond Viewing Platform.

Much to his surprise Cllr Savage found himself ‘taken captive’ by the volunteers and marched to a new sculpture installed in celebration of the 40th anniversary of the opening of the school. The ‘Boy Reading’ is a very impressive point on the newly launched sculpture trail and symbolises the relationship between the Tidy Towns group and the pupils, teachers and parents in the school.

The 10 point Sculpture Trail is marked by decorative signage beautifully designed by Vision Design and is an added attraction in the village.

Savage and PRO of Dromiskin Tidy Towns Mary Murtagh. The large attendance were reminded that St. Peter’s National School was one of the first in the country to achieve Green Flag status and as a result is one of a very small, elite group that can boast eight green flags.

Earlier the school attended a ceremony at the Crowne Plaza Dundalk at which it scooped the overall award in the in the Eco Tribes challenge for their fantastic Medieval Garden at the monastic site in the village centre.

They were also awarded the maximum five stars in the GROW Awards.