Looking back at the Girl Guides of thirty years ago 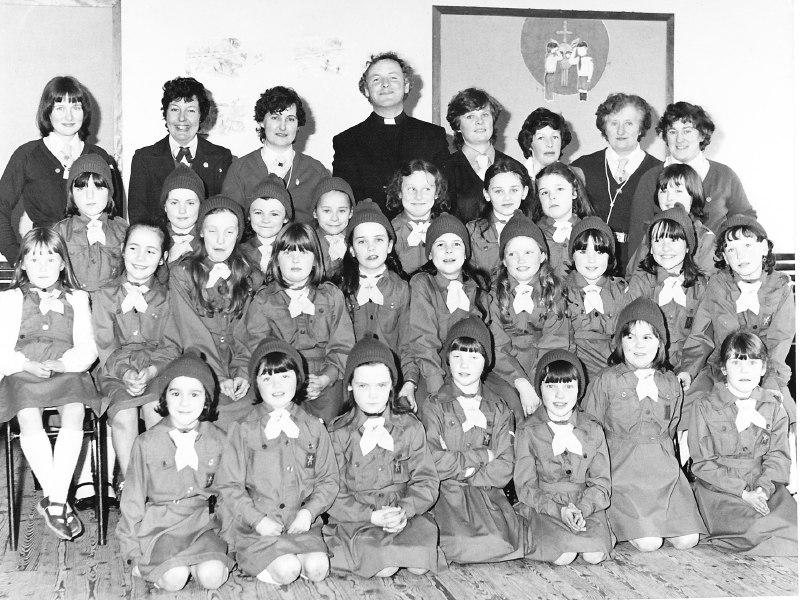 The photograph to the side of this article is of the Redeemer Brownie Pack taken in the early 1980s. Do any of my readers see themselves in it?

The back row has Guide leaders who were in charge of the Pack at the time, with, in the centre, Fr. Patrick Larkin who was appointed Curate to the Redeemer Parish about this time and later Administrator until he was appointed Parish Priest of Ravensdale.

The Guiding movement was very strong in Dundalk at the time and there must have been around 300 guides and brownies enlisted in the various groups around the town.

Many of the 25 young ladies in the picture would have been married since then and probably have their own children involved scouting movement of the present day.

Scoil Eoin Baste was opened at Fatime fifty years ago at the start of the 1965/66 year. Presently the school has an enrolment of around 200 boys and girls. The figures for 1966 are not available on line but the highest enrolment in recent years was 236 in 2007.

According to a report in the Democrat, Cardinal William Conway, Archbishop of Armagh, blessed and opened the new school at Castletown in the last week of June 1966.

The trial of Sir Roger Casement

The trial of Roger David Casement, the last of the leaders of the 1916 leaders to be executed, commenced at the Royal Courts of Justice in London 100 years ago next Sunday, June 26, 1916.

He was convicted by a jury, something not afforded to the other executed leaders, and his appeal against his death sentence was dismissed on July 17. He was hanged at Pentonville Prison on the morning of August 3.

His body was not returned to Ireland for another fifty years. Something that is not remembered much now is that a solider in the Royal Irish Rifles, Daniel Julian Bailey, was also brought before the same court as Casement.

He had been captured by the Germans in September 1914 and was also charged with treason because he had agreed join the Irish Brigade to fight against the Allies, at a meeting in a prisoner of war camp with Casement. Bailey travelled to Ireland in the same German submarine with Casement in April 1916.

After Casement had been sentenced to death, Bailey was brought before the same court and pleaded 'not guilty'. At this point, however, the Crown prosecution surprisingly entered a 'nolle prosequi' motion and he was immediately released.

The reason given by the Attorney General was that it was believed that he took the course to get away from captivity in Germany and had no intention of 'helping the enemy'.