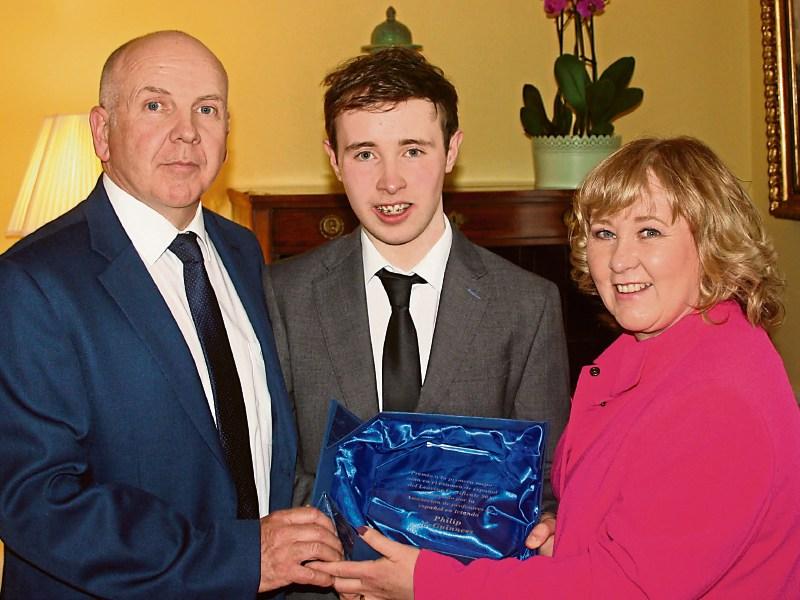 BLACKROCK student Philip McGuinness was recently honoured by the Spanish Embassy in Ireland for achieving the top mark in the country in Leaving Cert Spanish.

Philip who sat the Leaving Cert this time last year is currently studying Spanish and History at Trinity College Dublin.

Although he had been delighted with his Leaving Cert result, Philip says he was still surprised to receive the call,

“I found out in March when I got a call from the De La Salle School during a lecture. I couldn’t believe it, you never expect to be acknowledged on a National scale’.

Philip was subsequently invited to meet the Spanish Ambassador to Ireland last month accompanied by his parents Philip and Elizabeth and the Principal of the De La Salle in Dundalk.

“We were given a warm reception with food and drink along with the other prize-winners there on the day. They introduced me to the Ambassador himself, a man named José María Rodríguez Coso, the Education Officer of the Spanish Government in Ireland and a representative of the Government of Castilla y León. I also met with the Chief Examiner for Spanish from the SEC’.

“I was given a glass trophy acknowledging my achievement and I was then told that as part of my prize, I was to be taken for a 4 day visit to the region of Castilla y León (just north of Madrid), to cities like Salamanca, Segovia and Valladolid’.

Having studied Spanish since first year, for Philip there was an immediate connection, hence his decision to pursue the language at third level

“I was drawn to the language almost immediately. It made sense to me, the words, the construction and most importantly, the pronunciation. Spanish, closely related to the other Romance Languages, had many words and phrases that I could already recognise’.

“I also knew that it could prove useful down the line. I knew for certain that I wanted to study a language at University, be it, English, Irish or Spanish and I eventually settled on Spanish because of the range and variation of learning on offer. It also provides me with options in the future, should I want to become a teacher or go on a do a PhD’.

As well as studying History and Spanish at TCD Philip is also putting his considerable experience to good use by tutoring exam students, something which he very much enjoys,

“I like using my own experience to help others and to make the exam a less daunting experience. I also enjoy seeing students take an extra interest in the language. Languages, in particular, transcend exams entirely. It’s like imparting a new life skill to someone’.

“I take on small groups of Junior Cert and Leaving Cert students and I try to tailor the grind to their individual needs. If they are struggling with a particular area, we will address it! I also provide them with simple, straightforward notes that help to pare down the course slightly for them as well as providing them with useful techniques that they can utilize on the day of the exam’.

“I aim not to try to cover all areas of the course in each session. Each area of the exam feeds into the next. It’s my aim to cover key vocabulary, verbs and improve sentence construction. Comprehension and basic translation skills area also important. I would also aim to improve the elaborative skills of students from what they have already learned in class’.

And for students approaching their exams at this time Philip has some good advice,

“I always found that vocabulary was the key, I made out lists of words that I could learn in small bites as I went along. Listening to the language being spoken also helps your reading of the language. I read Spanish language articles online on things that interested me such as sport. It doesn’t seem like such a chore then’.

“There is also scope to be unique when preparing for the exam. Prepare quirks, individual to you that you can use for the written part of the exam. Basics are the most important; numbers, dates, and basic vocabulary go a long way in securing a great grade!”

Philip is continuing to offer private grinds right throughout the summer months and beyond for all those preparing for exams in the forthcoming academic years. For more information you can contact him at mcguinp1@tcd.ie or at 0879601689.