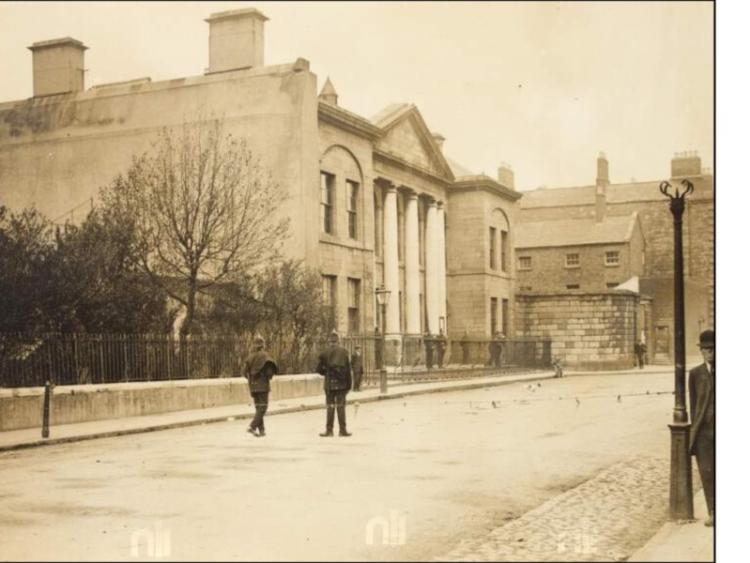 Mary Callan was a girl of excellent character. Originally from county Armagh, she had worked in the Louth area for many years and in the year 1927 she had been gainfully employed for two years by Fr. McKeone, Parish Priest of Faughart, as a housekeeper.

She lived and worked in the parochial house of Balregan, six miles from the large town of Dundalk. The 32-year old woman seems to have enjoyed her work and got on well with her employer as well as being well liked in the area.

There was one person with whom Mary could not see eye-to-eye however. Gerard Toal, described in court reports as “sullen, dark and sallow,” also worked for the priest but as an outdoors general servant. Toal, who was only 18 in 1927, was responsible gardening and bicycle repair. Court reports also mention him as being adaptable to the driving of a motor car, a rare skill in those times when a motor-car was a luxury enjoyed by a small few.

Toal considered Mary Callan to be “strict” and very difficult to please in comparison with the mild-mannered cleric. Toal admitted in his own statements later the lack of friendship between the two employees. Mary had reported him for stealing eggs and he had not forgotten it. They ate at separate tables and exchanged very few words.

Fr. McKeone was aware of the animosity between his two employees but nothing could have warned him about the depth of hatred felt by Toal for his colleague. On the morning of 16 May Toal went about his usual duties, before driving Fr. McKeone into Dundalk to the railway station. Fr. McKeone testified that when he had left the house Mary was washing in the kitchen. Toal had arrived home at 12pm and what happened in the next hours is shrouded in mystery.

At 8pm, as arranged, Toal collected the priest from the railway station and returned him to the parochial house. Fr. McKeone was puzzled to find the front door locked. McKeone then asked Toal if he had seen Mary during the day to which Toal replied that she had “went out.” When pressed further, Toal said that she had ordered him to eat his lunch quickly as she had to go out, giving no further details.

Toal said that after this event he went out to the garden to fulfil his duties and on his return the door was locked.

The priest checked Mary’s room and found that many of her clothes were missing. On searching the shed, he also noticed that her bicycle had been taken. When Mary failed to show for breakfast the following day, Toal was sent to her parents’ house to enquire of her whereabouts. They had heard nothing from her.

Fr. McKeone then went to the Garda station and casually mentioned her absence. A rudimentary search of the house was conducted, but revealed little. The parish priest hired a friend of Mary’s, Miss Margaret (Peggy) Gallagher, to complete Mary’s duties after her unchareteristic disappearance. Miss Gallagher was worried by Mary’s absence and suspected that Toal knew more than he let on. She waited patiently for her opportunity to search Toal’s room, which he hadlocked since the day of the disappearance.

The chance finally arose in November of 1927 and she entered Toal’s room where she found part of a lady’s bicycle and a dismantled lady’s watch, both of which she recognised as Mary’s. The priest, who had been suspicious before was now alarmed, and he drove Toal to the garda station. The gardaí, with no body and no proof of death, allowed Toal to leave, despite the strong evidence that a crime had been committed.

Within days Toal had gone north, waiting to get the boat to Canada. The gardaí had a change of heart in the meantime however, and Toal was extradited from the north and brought to Dundalk Garda Station. He was interviewed at length about the day of Mary Callan’s disappearance and the items found in his room. His answers were evasive but not damning.

The gardaí needed to take drastic action to get ascertain that Mary had been murdered and the Dublin Fire Brigade was summoned to north Louth. Falmore Quarry, less than a mile from the priest’s house and well known to Toal, was to be dredged.

Four days and four million gallons of water later a sack was discovered in the murky waters. The grisly contents left the locality in no doubt. Mary Callan’s dismembered body had been found.

The trial took place in July 1928. The prosecution focused on the dismemberment of the body. Toal had been resident at the Artane Industrial School as a young orphan. Witnesses came forward to vouch for the fact that he had worked in the butcher’s, where he learned the art of dismembering animal corpses.

He denied having worked there. The prosecution also placed emphasis on the items belonging to Mary in his room, including clothes, a prayer book, parts of a lady’s bicycle and a scissors. He tried to explain these away by saying that he had either stolen them elsewhere, bought them from someone he didn’t know or that he didn’t know how they had ended up there. He also fabricated a story of stealing bicycle parts from the cycle shop in Dundalk which was proven to be false. His total lack of concern for his missing colleague was also mentioned by the prosecution.

The defence’s case hinged on the fact that it was unknown how Mary died and there were no eyewitnesses to connect Toal to the crime and therefore it was impossible to prove. In their mind there was a reasonable doubt that Toal had murdered, dismembered and disposed of Mary Callan’s body. The jury begged to differ. After less than an hour’s deliberation, Gerard Toal was sentenced to death for the murder of Mary Callan on or about 16 May, 1927. An appeal was heard but was unsuccessful and Gerard Toal was executed by hanging on 28 August 1928, still proclaiming his innocence. He was aged 19.

Colm Wallace has written a book “Sentenced to Death: Saved from the Gallows” about thirty Irish men and women who had the death penalty imposed on them between 1922 and 1985. It is available in all good book shops and is also available on amazon.com