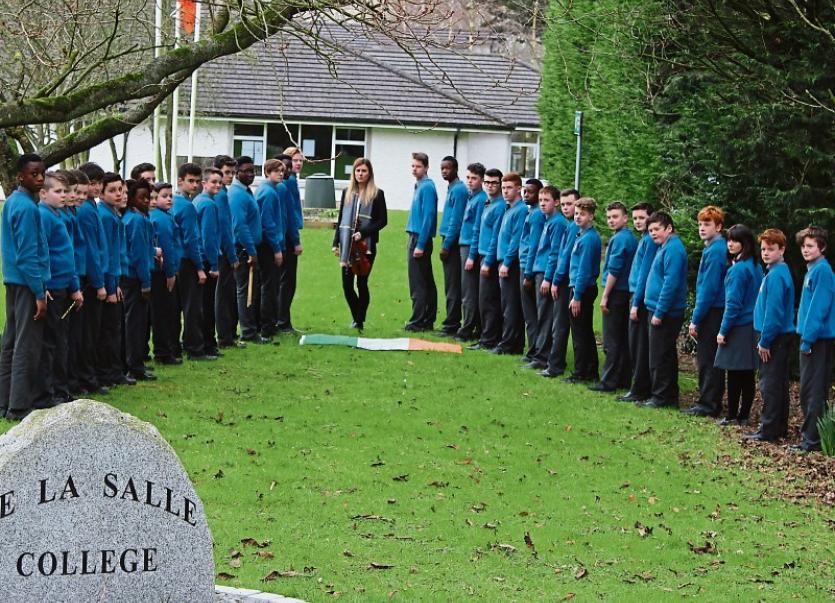 A class of music students from De la Salle college have written and performed a stirring song to tribute the Irish rebels of the Easter Rising.

The song was written for a competition run by the GAA and was selected to represent Louth in the all-Ireland final.

The Heroes of ‘16 is the fitting title of the patriotic song. The song was written and arranged by De La Salle College Dundalk Music Teacher Pamela Campbell and inspired by the Fureys’ classic ‘The Lonesome Boatman’.

The musicians involved range from twelve to eighteen years old. All are accomplished on their instruments, having won multiple titles at provincial and all Ireland fleadhs, performed at the national concert hall and on multiple radio stations. Instruments in the recording include fiddle, harp, whistles, low whistle, harp, banjo, piano, maracas and drums.

The student’s dedication to this creation shows in the production, which is flawless and meaningful.

The harmonies, counter melody and arrangements work effortlessly together.

The video captures beautifully everything it means to be Irish. The song was recorded professionally by Producer Garry Mc Carthy from GMC Beats and the video was put together by teacher Oliver Brennan students Samuel Ogobamidele, Oisin Martin, Dylan Stewart, and Jack Maguire.

The video is proving to be hugely popular, with thousands of views in its first few days online.

It features actual footage recorded during the 1916 Rising as well as photographs of the leaders. To date it has over 15k views and has been shared by wrestler Sheamus and Irish comedian Eric Lalor and has been played numerous times on Dundalk FM.

The poignant lyrics of the song, fantastic musical arrangements and iconic images from Irish history are sure to evoke feelings of great pride in anyone with Irish blood.