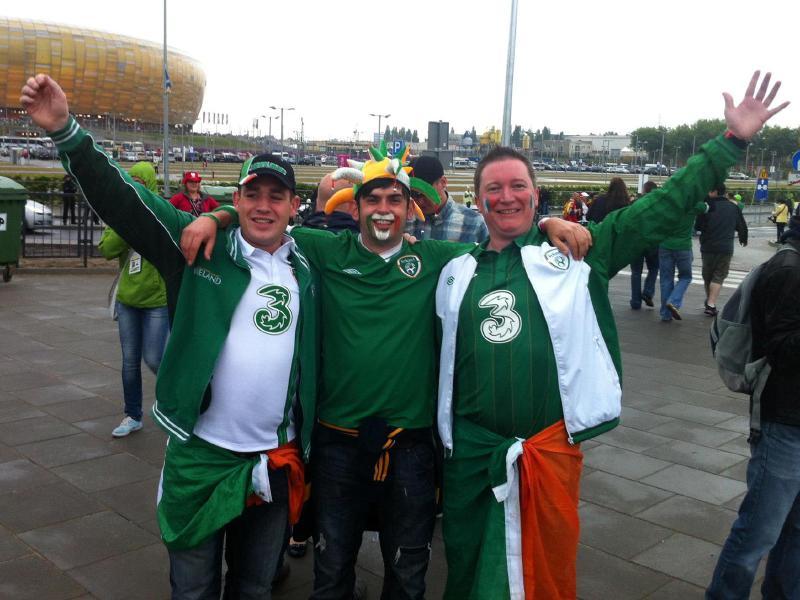 The year is 2002. The date is Sunday June 16. Ireland has just been eliminated from the World Cup on penalties by Spain (a game they should have won!). An 18 year old me stands behind the bar in Harvey’s in Park Street declaring that no matter what ‘I will be travelling to the next tournament’ rain, sleet or snow.

Fast forward to Tuesday 11th November 2011 and Ireland have just swept Estonia aside in the Euro 2012 playoffs in order to qualify for their first tournament in ten years.

With the many years that had passed and the many brain cells burned through my years of study (drinking) in DKIT and general shenanigans that accompanies the early to mid 20’s, the promise I had made years before was truly forgotten.

One day not long after the Estonia result a friend of mine asked if I was considering taking the trip to Poland and Ukraine. Now let’s just say at the time I was not the biggest fan of the Trapattoni era so my first answer was, why bother. To this he reminded me of the promise I had made to myself back in 2002 (how he remembered I will never know as he was usually by my side during all the carry-on) and informed me that a couple of mates were heading over and needed one more to fill the campervan, so I thought, what the hell, who am I to row back on a promise to my young self?

So the decision was made and the plans started with a definite on the idea of the campervan, after all Joxer had serious craic back in ’88. Now I’m sure that many will remember their scramble to book campervans prior to ‘Polkraine’, however we had made it even more difficult as we had only decided to start looking in February of 2012. As we didn’t want to be paying a fortune, booking one in Ireland and Poland was out of the question.

And so our journey started in Milan, Italy. Yes you read correctly, Milan which is over 1,200km from Poznan! Even including the flights, this worked out cheaper than the alternatives mentioned above. And feck it, it was all about the adventure, and what an adventure it was.

So as soon as Jonathan Walters had disposed of the Bosnians’ the conversations quickly turned to France 2016. But this time we would be far more organised and have the whole thing booked and sorted as soon as possible. We decided since we had moved on in years since the last trip that maybe the campervan was not the way to go this time (it was really the flashbacks of the smell of that van from four lads sharing it for 10 days that drew that conclusion).

I know what you are thinking - what is the whole point to my ramblings above? Well, if like myself in 2011 your thinking ‘will I, won’t I. my advice would be DO IT. Don’t run the risk of having to wait another 10 years like I did. Do not pay any attention to those who might say you are just jumping on the bandwagon. After all we Irish LOVE a good band wagon. Irish football in the 90’s and in more recent years the Irish rugby team, Dundalk FC and Conor McGregor just to name a few. I think it’s more the fact that as a sporting nation we have been considered underdogs in most sports, so we really get behind a team that is doing well no matter the sport.

Now I know that a lot of you reading this my think that it is just too expensive to go to France, well that was the original point of this whole article in the first place. Over the last two tournaments We have put a considerable amount of hours into planning these trips so I thought I would pass on some of the knowledge to those who have doubts or maybe haven’t decided yet whether to make the trip. I hope that this article will contribute to even more support for the Boys in Green during the summer.

The aim is to hopefully provide the most cost efficient and uncomplicated means of travel as possible.

I'm sure, like most Irish fans in 2012, many people will be going down the campervan route. It has to be said that this is possibly the best way to do it as it was serious craic four years ago. The Carlsberg Fan Camps were basically just for Irish fans and the atmosphere was unbelievable. Just remember that when you are filling the van from floor to ceiling with cheap beer from Aldi that you remember that this will also be your sleeping quarters for the next 1-2 weeks. At least leave a little space to put your feet up.

With France being so close, driving a camper from Ireland is a very realistic route. The longest drive will probably be from Bordeaux to Lille which will take roughly 7-8 hours. And as you have a camper you can choose to cut this in half by stopping over in some random town for the night, which just adds to the adventure.

Celtic Campervans and Bunk Campers seem to offer the quality and price in Ireland with rough prices provided below. It is worth mentioning that hiring a campervan usually involves a hefty deposit and they also regularly come with a lot of rules/terms and conditions. Some questions you may want to ask before you hire might be:

Is there unlimited mileage included (if not, what does it cost)

What deposit is required?

Does camper need to be returned with a full tank?

What is the return deadline and does a late fee apply?

One of the main expenses to take into account is the cost of fuel. €1,700 between four people does work out cheaper than the hotel options but then you have to consider how much you would need in other to fill the van every other day. Just something to keep in mind.

The alternative to this is flying into France, picking a van up and making your way around the French countryside. There are any number of ways this can be done, depending on where you fly to.

The basics would involve, booking a flight, pick up the van at your preferred location. Dropping the van off in the pre-arranged location and grabbing a flight back to good old Ireland.

Like Poland four years ago and basically every other central European country, each host city in France should have plenty of accessible campsites. Many if not all of these will be equipment with restaurants/cooking facilities along with bathrooms and showers.

UEFA have yet to announce if there will be any Fan Camps at this year’s tournament but I’m sure there will be. These are great craic but do tend to have marked up prices.

There will more than likely be unofficial Fan Camps but again these can be considerably more expense compared to your normal campsite (that will be packed with supports from all over Europe).

There are travel agent options available if you think that all this research is too much hassle, however, these will cost considerably more. Our trip for two games is costing roughly €850 whereas; I have seen a tour operator offering basically the same package for €1,500.

No matter how you go about getting to France this summer, the main thing to remember is to bring your colours, soak up the atmosphere and make sure you enjoy yourself. COYBIG!