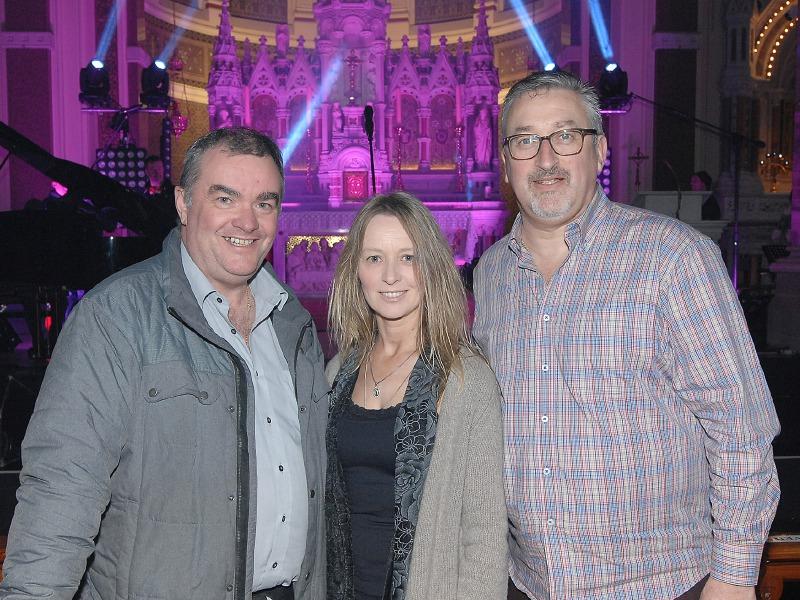 Family and friends of late Detective Garda Adrian Donohoe led by his wife Caroline, along with colleagues and many others enjoyed a magnificent night.

The concert was set to start at 8pm. However the church was almost full by 7.30 with ticketholders in high spirits for what they all sensed would be the most special of nights.

Superintendent Gerry Curley wellcomed all and thanked the organising committee and artists. Tickets selling out quickly was a reflection on Adrian, who he said was not just a fantastic colleague but a fantastic member of the public.

RTE’s Eileen Dunne in opening the concert, described it as a great tribute to a man and quoted Dylan Thomas’ ‘Death has no Dominion’.

Then for almost three hours of music from local, national and internationally acclaimed artists beginning with an amazing strings recital.

Singer-songwriter Stewart Agnew then took to the altar-stage receiving a very warm reception from the audience.

Fr Liam Lawton brought tears to many of the audience with a performance of Les Miserables’ ‘Bring Him Home’ amongst other songs.

Kathleen Maddy opened the second half of the concert with two reflections on Adrian. She was then followed by The Priests who sang a variety of songs from ‘Panus Angelicus’ to the Beatles ‘Eleanor Rigby’.

The fantastic Redemptorist Choir joined both Liam Lawton and The Priests on stage as well as performing in their own right.

The night also held a surprise in store as Eurovision winner Dana was in the audience and joined in the concert by singing ‘Lady of Knock’ which saw the entire audience sing along.

The high standard of performance on the night was matched by stunning lighting displays which were unique to each performance.

Garda Commissioner Noirin O’Sullivan addressed the audience and said the concert was not only for Detective Garda Adrian Donohoe but also for Garda Tony Golden and an Garda Siochana.

The concert had been based in the community like an Garda Siochana.

“We are based in the community,” she said, “we live inside the community. The support of the community on Adrian’s death continues to both his family and An Garda Siochana to this day, “We attract the brightest, best and most courageous into our ranks”.

Eileen Dunne brought the night to a conclusion by saying that Adrian Donohoe and Tony Golden “paid the ultimate price and they will not be forgotten.”

Floral presentations were made to Caroline Donohoe and Eileen Dunne.

The Remembering Adrian concert would not have been possible without the huge support shown through Louth and beyond. The committee is currently compiling the many names of individuals and groups who supported the event via sponsorship and services to ensure that no one is omitted.