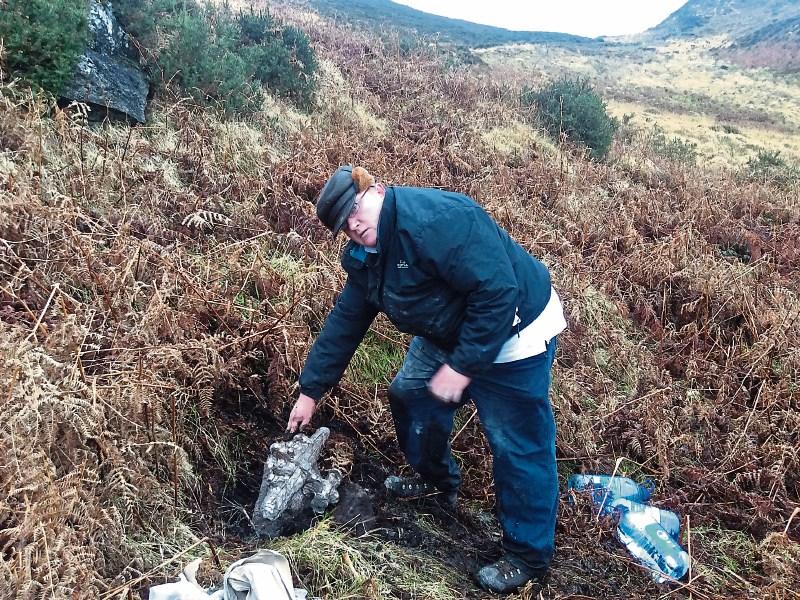 A local man has made a plaque in honour of the crew and passengers aboard a plane which crashed on the Cooley Mountains in 1942.

Brendan Connolly from the Alphonsus Road made a statute to mark the spot of the crash of the RAF B-24 Liberator and the 15 people who died when it slammed into boggy ground on the side of Slievenaglogh Mountain, in the Rock Marshall Mountains near Jenkinstown during the Second World War.

Brendan also found pieces of what he believes to be parts of the crash, which he had blessed by a priest in StPatrick's Cathedral.

He made a concrete base using bottles of water that he took up the mountain to make the concrete plinth.

A top the plinth he made a concrete cast modelof the Liberator bomber.

The RAF B-24 Liberator crashed into the mountain after getting lost in thick fog while making a trip from Egypt to RAFHurn in Dorset.

The flight crew were told before they reached the half way point in their journey to turn around due to extreme weather conditions.

However - nearing the point of no return - they decided instead to continue on their fateful journey.

Sadly it left its course and running low on fuel, the crew saw the lights of a city which they understood to be Dublin.

The crew decided to attempt a landing at Greencastle Airfield, County Down. However thick mist hampered visibility, resulting in the aircraft crashing into Slieve-na-Gloc and breaking apart on impact.

The alarm was raised by a local man by the name of McKevitt who heard a plane overheard before a loud crash.

After he witnessed the scene he got medical help, and miraculously there were five survivors.

Accounts vary, but ultimately 15 people died as a result of the crash.

Writing in 2006 in the Democrat, former editor and current columnist Peter Kavanagh wrote: “In spite of this, it is my own memory of the times is that many people from Dundalk went out to the scene of the crash in the days and weeks that followed- hunting for souvenirs.

“The wreckage of the plane was scattered over a wide area and I recall that at about that time we got a load of turf from the mountain delivered to our homein Dundalk.

“Fuel was very scarce at the point in the war and we burned anything we could get to keep us warm in cold weather.

“Later, when the bottom of the turf pile was reached, my brother found several aeroplane parts, including some heavy ammunition cases, buried in the mould.”

David Tolson - a brother of the one of the airmen killed - visited the site with family in 2002.

Brendan statute is not the first memorial on the mountain of course.

Previously Noel Roddy erected a metal plaque near the site.

The plane was one of the three to crash during the war.

A British Hudson bomber crashed killing 3 in 1941 and a P-51 Mustang fighter of the US Army Air Forces crashed in September 1944 killing its pilot.