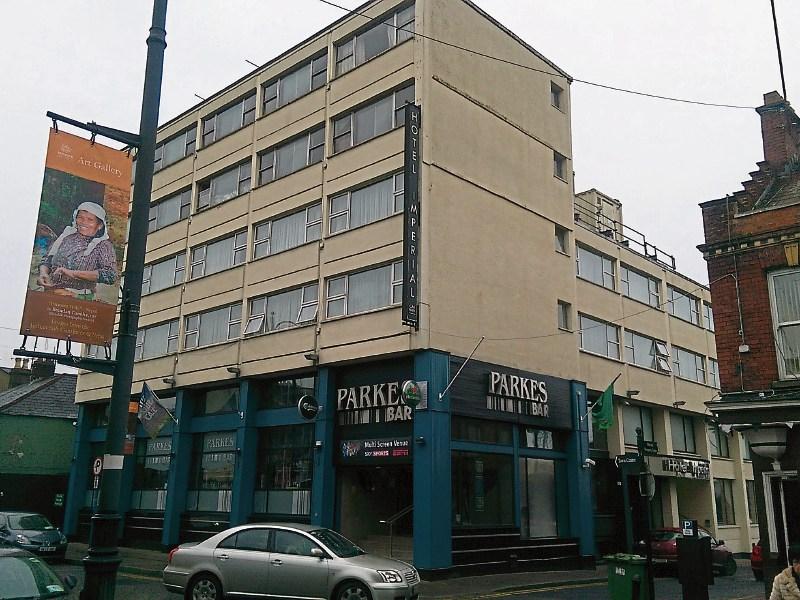 Dundalk's landmark town centre hotel - The Imperial - is to be sold.

The 50 bed hotel is being sold by receivers Deloitte. The last of Dundalk's town centre hotels, the Imperial houses both the popular Parkes Bar and Silence niteclub.

The Imperial Hotel, Park Street, Dundalk, stands on the site of three old premises at 96, 97 and 98 Park Street, the original hotel on the corner of Rampart Lane, was at No. 96.

According to the Irish Historic Towns Atlas (No. 16 Dundalk), written and edited by Harold O’Sullivan; the premises was first used as an hotel in 1856 but may have existed as an inn before that date.

Mentioned in Bassett's Guide to Louth (1886) but no name given. Tempest's Annual of 1897 says that the proprietor then as a Patrick O'Toole.

According to Victor Whitmarsh in his 'Old Dundalk' pictorial book, (1988) the Imperial was owned 'at the turn of the century' by a Mr. Connolly whose family came from Clanbrassil Street and owned the Lorne Hotel (No. 15). He purchased the Imperial from Felix P. Campbell who became the fist Honourary Secretary of the Emmet Band when it was established in 1863 by Peter and Tom McEvoy. A Hugh O'Hare had owned a furniture and cabinet making shop at 97 and, when he died in 1917, his premises was purchased. By 1918, the hotel had doubled in size and was advertising as 'the largest hotel between Dublin and Belfast.'

No. 98 was owned by a Bernard Hamill who ran an extensive grocery business and was an early member of the Dundalk Urban District Council. After Hamill's death in the 1960s, his premises was sold to the Quinn family and all three old premises were demolished and the present structure completed in about 1970.

The Imperial (including O'Hare's) had been bought in about 1940 by Mrs. Irene Quinn who owned the Ballymascanlon Hotel and for many years was managed by her son Peter Quinn. The hotel was one of the Quinn Group hotels which included the Ballymascanlon, The Fairways, Haggardstown and another hotel near Dungannon in county Tyrone. After Mrs Quinn's death the Park Street hotel was sold to a consortium that had build the Long Walk Shopping Centre and, later the Carroll Village development.

The Imperial had, over the years, seen many political gatherings and, during the Truce period in 1921 had been the venue for a meeting between Michael Collins and Eamonn de Valera prior to the Civil War.

It also witnessed a serious riot in 1971 when the then Taoiseach Jack Lynch attended a function hosted by the Dundalk Junior Chamber of Commerce and a demonstration was organised at the front entrance by Sinn Fein to protest against internment in Northern Ireland.

The hotel was the central of much of the organisation for the early Maytime Festivals in Dundalk and, it was alleged, that for a short time, was the home of a local pirate radio offices. It was a popular venue in the 1980s and 90s for dancing and other social activities. It was also rumoured that it was the centre of much intelligence and counter-intelligence by both sides during the recent Northern Ireland Troubles.

(This rumour was, however, never substantiated.)

Another story about the old hotel was that it was the home of a ghost which could be seen at times, peering out of a first floor window and was reputed be very unlucky to see, but this may have related to Hamill's old premises.