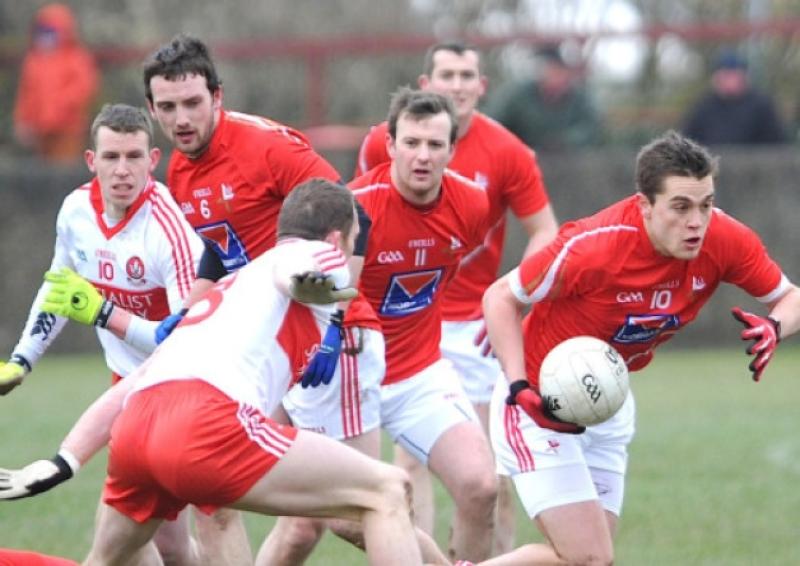 Derry put paid to Louth’s quest for promotion from division two in Drogheda on Sunday by a scoreline of 2-14 to 1-12.

Derry put paid to Louth’s quest for promotion from division two in Drogheda on Sunday by a scoreline of 2-14 to 1-12.

A late goal from Derry’s Benny Heron ensured the win, with Louth forced to play most of the second half with 14 men following the dismissal of Mark Brennan.

An explosive start saw two penalties awarded in the opening five minutes. Within 60 seconds the home side converted from the spot following a foul on Louth forward Ciaran Byrne. Shane Lennon dispatched that penalty high into the roof of the net.

James Kielt got Derry moving with a neatly taken free after four minutes.

However it got better for the Ulster Men a minute later when Louth’s Derek Crilly was adjudged to have pushed over Derry’s Raymond Wilkinson in the square.

Again Kielt put away the penalty to give the visitors a one point lead.

The game was balanced just two minutes later when Crilly reprieved himself for that penalty foul with a great score from the right.

Yet a Derry onslaught followed with four points unanswered in four minutes.

The home crowd had something to cheers about when Shane Lennon converted a 12 metre free in the 16th minute.the gale.

That three point margin for Derry was extended further when Lee Kennedy tapped over an easy free with the strong breeze in his favour.

As the game descended into an attritional battle, Louth began to fight back in the face of the Ulster attacks.

Kevin Rogers and Lennon closed the Derry lead to just two with nine minutes to the break.

But the visitors finished the half on a high as three points from Eoin Bradley, Kennedy and James Kielt left them ahead by five at the interval.

With the wind against them, Derry surprised the home side by scoring two quick points in the opening two minutes, to push their advantage to seven points.

It was that man again, Shane Lennon who kept the Wee County in touch with a free after six minutes of the second half.

First half substitute Eoin Bradley was the focal point for most of Derry’s attacks and scored a free two minutes later.

From then on the home side laid siege to the Derry back line, and despite the sending off of Mark Brennan Louth fired over seven points without reply to level the clash.

Yet two more frees from Bradley relieved the pressure and when Heron found himself one-on-one with Neil Gallagher in the Louth goal he made no mistake to earn a vital victory for the Oak Leaves.