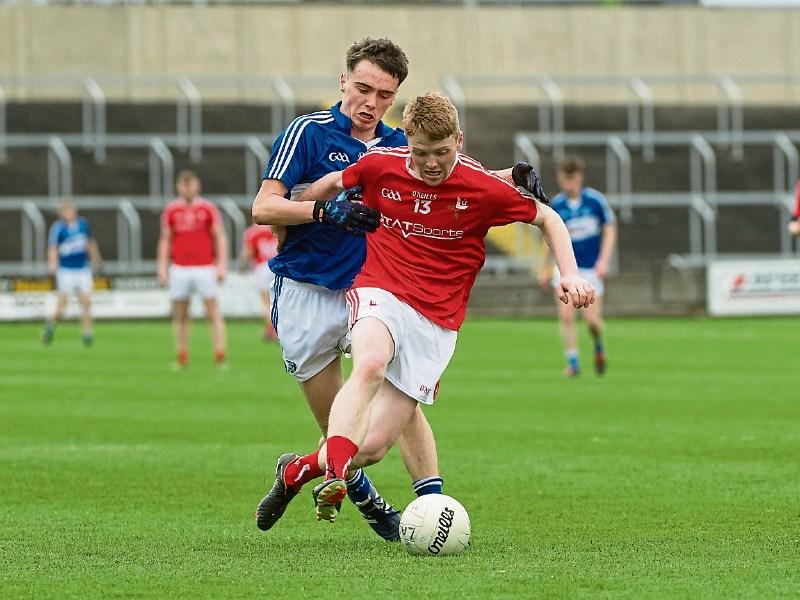 Louth minor boss Wayne Kierans was a very happy man on Saturday afternoon having watched his side battle their way through to the quarter-finals of the Leinster Minor Football Championship for the third-year running.

“We’re very happy with the win,” he said.

“The fact that we got over a very tough game and got the win is very pleasing. Historically, the Louth minors haven’t won those kind of games, including in my first-year last year where we were beaten by a point. But, we have worked really hard and to come out on the right side of a tight game is very, very pleasing.”

Having led on minimal occasions throughout the regulation 60-minutes, Kierans pointed to big moments as crucial, none more so than keeper Alan McGauley’s second-half penalty save.

“We were behind, although the game ebbed and flowed either way. We had a great penalty save by our keeper Alan McGauley and that proved crucial because we then scored our own penalty.

He (John Gallagher) did have a big impact. He’s definitely one of our most prolific forwards and he scored a great 45, a few frees and I think he got a point from play as well so he done well as did all the lads though.

“I sensed that we had that bit more in the tank and we emptied our bench to effect too. I also think the fact that they had a chance to win it at full-time and spurned it gave us a lift. We knew that we’d be strong in extra-time because we’re very fit and as I said, the lads coming off the bench probably gave us the edge. We were chasing the game at times but once we got our noses in front in extra-time we held on,” the Louth manager added.

Kierans also said that recent losses to Laois at various underage levels recently acted as a motivating factor for his U18 charges heading into the provincial opener.

“There was an appetite that we could win today,” he insisted.

“The seniors came down here and won plus we’d the extra motivating factor that Laois beat us in the u21 this year and last year, and they also beat us in the minor last year too so we were determined to reverse that trend.

“We should be competing and beating Laois with the greatest of respect. It’s not Kerry who we have lost to three-times in the last calendar year so we were determined to win today.

“The Leinster league is not really an accurate barometer of where you are for championship football and we knew that our preparation could go up 30-40% and that’s what we did.

“The lads came through the development squads together which is obviously a major bonus in games like this. Good work has been done with them and they worked that bit harder for each other today.”

As goes with the territory, expectations may rise in the county now about the prospect of a Leinster Final for Kierans’ group. However, the O’Connell’s clubman feels there is work to do.

“(Getting to a Leinster Final) That’s the ultimate dream. We’re all crying out for a breakthrough in this county at this level or at any level. But, we have to focus on the preparation for the next game firstly,” he added.