All for one, one for all at the Sean O'Mahony's

Kilcoyne: “We got to this stage last year and we fell short. This year we want to win it." 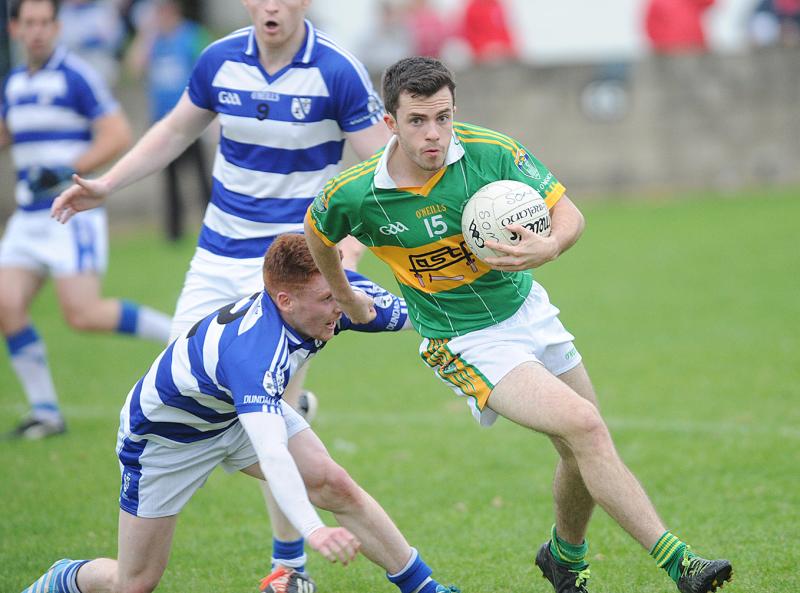 Stephen Kilcoyne in action for the Sean O'Mahony's against Dundalk Gaels in their Louth SFC semi-final. Picture: Arthur Kinahan

For a third consecutive season the Sean O’Mahony’s will walk behind the marching band ahead of another county final.

Following their Intermediate Championship success in 2014, the Point Road side reached the senior decider 12 months later where they were beaten by St Patrick’s.

However, they have made their way back to the decider again this year and one of the players who has been instrumental in the O’Mahonys’ success has been forward Stephen Kilcoyne.

And, speaking to the Dundalk Democrat, the former Maynooth University student described the determination within the O’Mahony’s team to go one better this time around.

“I’m sure the Mary’s are just as geared up as we are,” he said. “We got to this stage last year and we felt we fell short. This year we want to win it for the management, supporters as well as ourselves.”

The man who is better known as ‘Killer’ to his friends and teammates alike went into detail about how appearing and winning county finals has been a long term ambition of the Dundalk club.

“Four or five years ago we always wanted to win the Intermediate Championship. We always went out with the goal of winning intermediate at the start of the year.

“This year and last year, we went out with the goal of winning a Senior Championship. We have pushed on as a team and as a club so we expect to be at this level every year.”

Kilcoyne emphasised that reaching the final was down to everybody connected with the club and he said that they deserved huge credit for contributing to the run. Everybody, it seems, is in it together with the Seans.

“It means everything to the club,” Kilcoyne stated. “The O’Mahony’s have a great backroom team. We are not the biggest club in the county but we always have people around doing jobs every day.

“People for the jerseys, water bottles, keeping the pitch right and helping out around training. The committee is constantly organising fundraisers and helps out as much as they can. I think all the supporters and helpers would be as excited to win a championship as the players.” Looking ahead to the showpiece itself, Kilcoyne expects St Mary’s, who beat the Dreadnots in the other semi-final in dramatic fashion, to be a tough proposition.

“The Mary’s are a good side, they always have been. Any team that gets to Senior Championship Final is going to be good.

“It is up to who wants it more on the day. They will provide a good test but most games in the Senior Championship are a hard test, especially when it’s the final.”