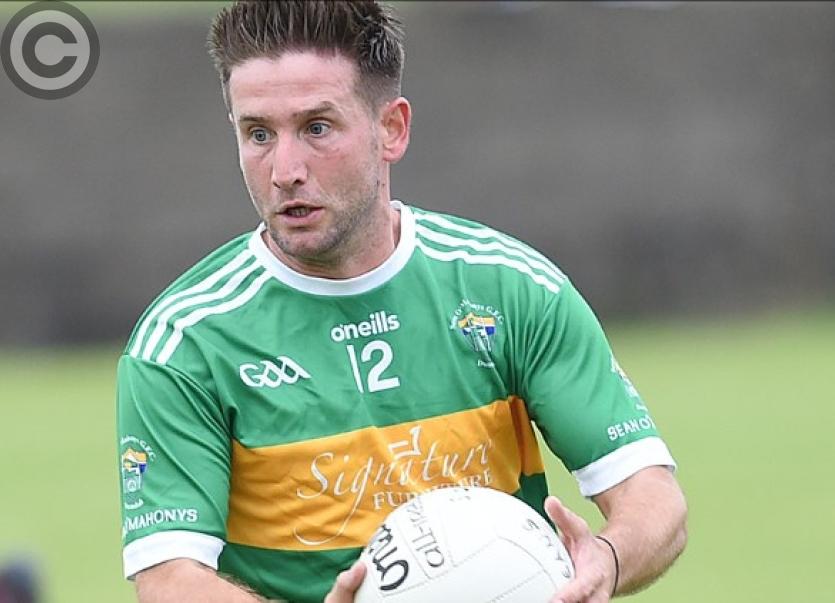 Stephen Fisher will be hoping to help Sean O'Mahony's into the knockout stages of the Anchor Tours SFC this weekend. (Pic: Arthur Kinahan)

In group one, Dundalk Gaels need a seven-point win over Newtown Blues to book qualification to the knockout stages, with St. Mochta’s all but qualified. A six-point win for Gaels would see all three teams level on two points and score difference, with scores-for to then be counted.

O’Connell’s and O’Raghallaigh’s both know a win would see them finish second in group two. A draw would suffice for O’Raghallaigh’s given their better score difference, -1 to -5.

Sean O’Mahony’s can top group three with a five-point win over St. Patrick’s, who will progress if they win Saturday’s clash. A draw would see O’Mahony’s follow Dreadnots into the last eight.

Pot four is simple: A win or a draw earns Gers progression, with St. Joseph’s requiring a victory against their neighbours.

Cooley Kickhams will advance from group one by winning or drawing against Naomh Fionnbarra, who require a victory.

Permutations for group two can’t be worked out, with Clan na Gael and Kilkerley Emmets still to play their round two fixture.

Glen Emmets need a draw or a win against St. Kevin’s, who must win.

Cuchulainn Gaels need a seven-point win over Lannléire to qualify for the quarter-finals at Stabannon Parnells’ expense.

A draw or win would send Dowdallshill through from group two, at their opponents Wolfe Tones’ expense. Tones would progress with a win.

John Mitchel’s will advance from group three with a win or a draw against Westerns, who must win their derby duel to avoid exiting at the group phase.

In group four, Roche Emmets are through and Na Piarsaigh will join them provided they can see off St. Nicholas.