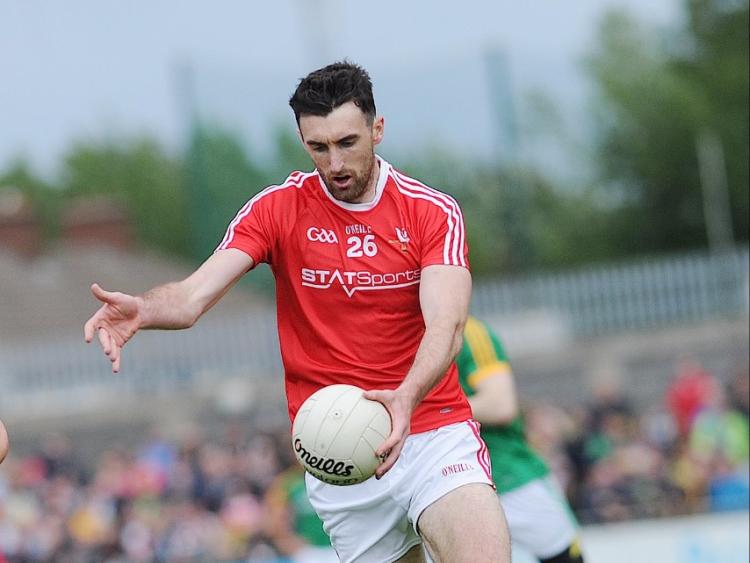 Tommy Durnin and James Califf were entertainingly reluctant to emerge for an interview with The Democrat at training in Darver last Friday night. Indeed, it took extremely helpful team selector Liam Kelleher to coax one of them out, Califf being the subject, or the victim maybe?

Had your writer known he was that unpopular to speak with he mightn’t have gone along at all!

The point of wanting to converse with a member of Louth’s midfield pairing is strange, you may say, but with Footballer of the Year Brian Fenton poised to wear Dublin’s No.8 jersey at O’Moore Park on Saturday evening, it seemed apt to inquire as to which of the Wee County’s twin towers would supply the Raheny man with company.

“I think we both want to mark him,” Califf said, chuckling, as we sat on a bench in Darver’s equipment storage room. The Dreadnots man had managed to find a screwdriver which he regularly waved depending on the intensity of his answers.

“It’s down to Wayne (Kierans) to choose, but it won’t make a difference, whoever is midfield for Dublin will be of great calibre… although, what usually happens is that Tommy will get told he’s marking someone, but he’ll just push him on to me anyway!

“You can quote me on that…” the rangy left-footer added, again, in a fit of laughter.

But his inter-county career hasn’t all been about giggles and good times. A repetitive mixture of injury and misfortune has meant Califf’s Louth career has been stop-startish.

He was on the panel in 2010, the year of the infamous Leinster final, but was made to wait until Colin Kelly took charge in 2015 before stringing a solid run of games together, becoming a regular in the Division Four-winning campaign of a year later.

Yet, almost three seasons on, it seems as though he’s only now getting another uninterrupted block of matches. Having given a solid year to Dreadnots in 2018, away from Louth duty, Califf is playing well for Kierans and co having returned.

He is nursing a calf injury, the one that saw him depart the fray against Wexford, the one he picked up a week in advance of that summer opener, but he’s confident of it righting itself suitably for the Dubs’ challenge.

Or perhaps it’s the positive nature of Louth’s 2019 camp which is behind his determination to prove himself fit? He rates the current set-up as the most enjoyable he’s been part of, now that he’s regained entry to the enclosure of relevancy.

“There’s no safety net or comfort zone about resting on your laurels here.

“A lot of people think that if you step away from the Louth panel that you want no involvement, and maybe some people are like that, but with me it was about giving time to the club and if I was lucky enough to be asked back this year, take the chance and work my way back in: when you go away for a year and come back, you’re back at No.30 and you’ve to work your way through again.

“You’d miss the craic with the lads and the training, it’s going to improve you because you’re playing with the best players in the county.”

Indeed, that word, improve, became a repetitive phrase-coining during our one-to-one. Califf later mentioned that he was in Portlaoise for last year’s humbling by Carlow. Certainly, Louth will have to ‘improve’ on that effort this weekend.

CLICK HERE FOR MORE BUILD-UP TO THIS WEEKEND'S MATCH