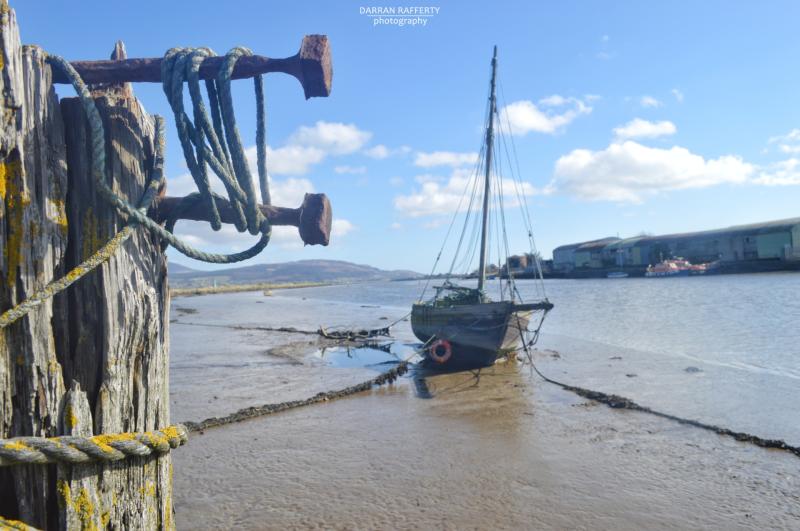 There has been much media attention focused on the so-called 'ghost ship' that washed up on the shoreline in County Cork this week.

The MV Alta remains stricken on the rocks at Ballycotton after spending 18 months adrift in the Atlantic ocean after it was abandoned by its crew when it became disabled in October 2018.

The sea around the Irish coastline is littered with countless shipwrecks, many telling tales - both fascinating and tragic - of nautical misadventure and true heroism in the face of overwhelming risk.

The coastline around Dundalk  and County Louth is no exception.

There are many identified wreck sites off the Wee County's coast, with a large number of them happening during the 19th century. 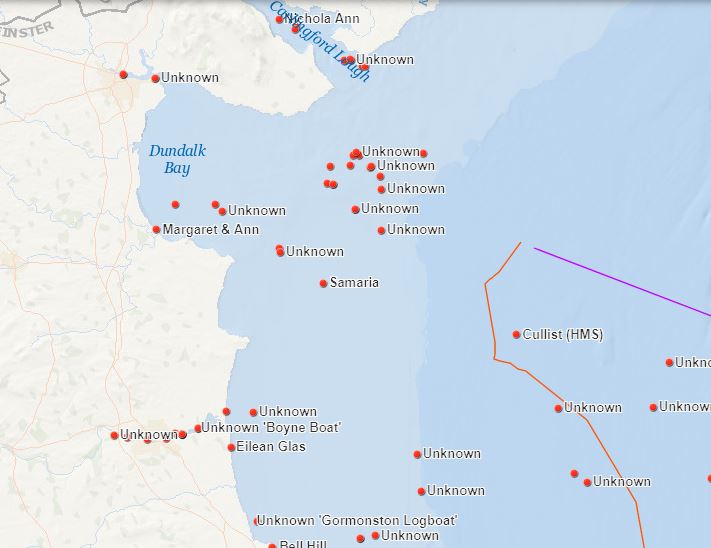 The J & M Garratt created quite the spectacle when it burst into flames as it approached the port of Drogheda on October 1, 1940.

According to the Drogheda Independent "on a pitch dark night, the flames from the oil and paraffin tanks shooting up into the sky and illuminating the countryside for miles around".

The 92-foot long schooner was carrying a cargo of 160 tonnes of firebricks and tiles at the time and was captained by a Robert Hutton as she entered the River Boyne that evening.

According to reports, her auxiliary engines caught fire and it quickly spread from the engine room, leaving the crew with no other option but to abandon ship. The "blazing hulk" slowly drifted towards the quay at Drogheda.

According to irishshipwrecks.com, "the ship sank after local dockworkers put out the fire", luckily the cargo was subsequently salvaged. 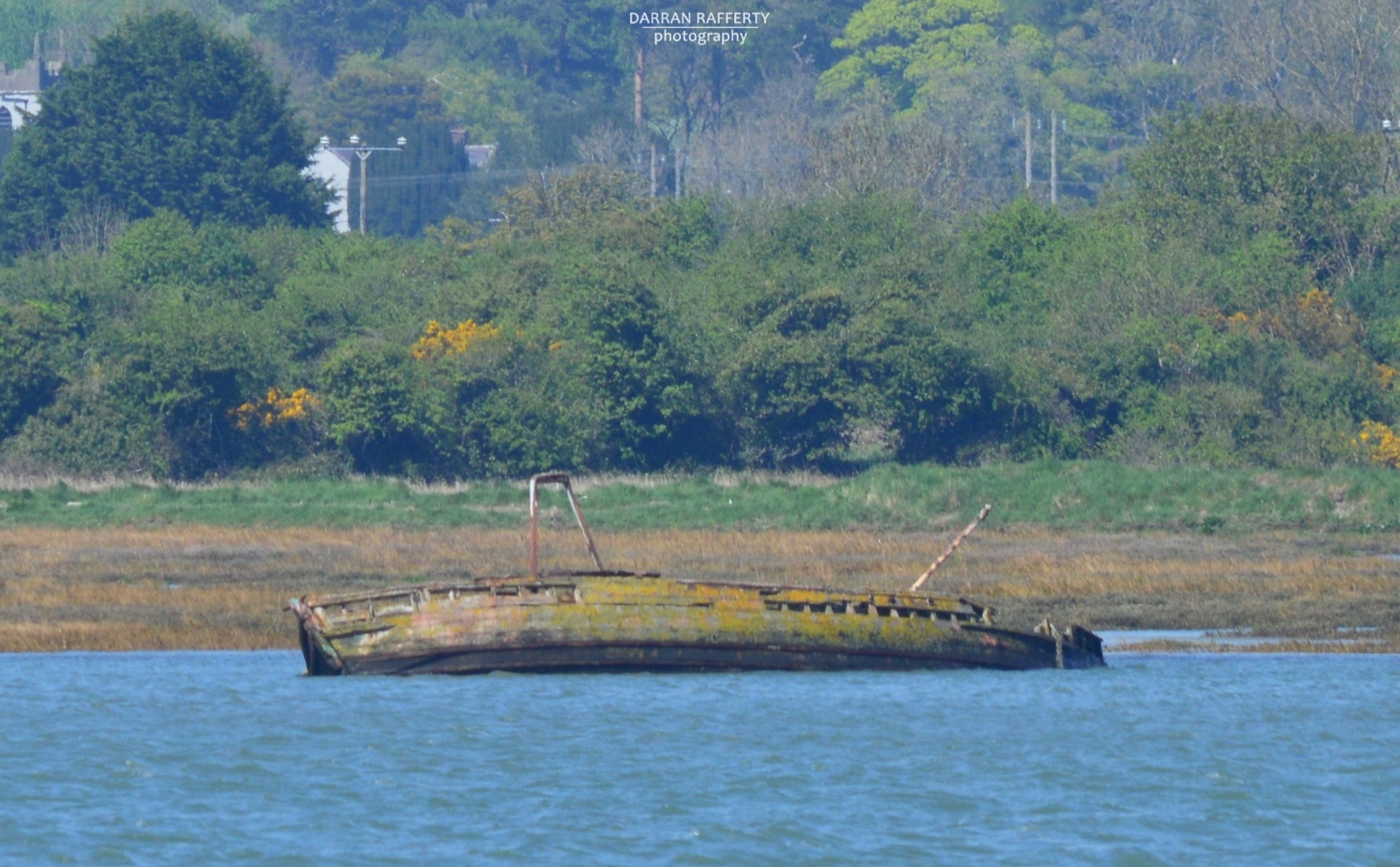 Elsewhere, there are stories of incidents of true gallantry as local coast guard personnel attempted to save lives, at extreme risk to their own.

On November 11, 1852, the schooner William Pitt was nearing Clogherhead when a severe storm hit the area.

In a private letter published after the 78-ton vessel ran aground that day, the heroism of local coastguard officer Captain Bernard, was lauded.

"At 9:30 AM, the Schooner William Pitt of Dublin, (was travelling) from Whitehaven to Dublin, (and was) coal-laden. John French, master, running in for this place when off the harbour struck on a reef of rocks to the northward and immediately went down stern foremost, the crew holding on to the only part of the vessel above water the sea running tremendous at the time.

"Captain Bernard of the Coast Guard, whose gallant conduct is deserving of all praise, was in attendance with his Men to render all the assistance in his power and fired several rockets from Dennitt'e life rocket apparatus, but all to no purpose.

"The hands were in imminent danger of being washed off the small space they had to cling to when Captain Bernard and three of his men got into a boat and succeeded in saving the captain and crew, four in number; the wind blowing a gale from the S.S.E. and a tremendous sea running in."

According to the author of this letter, this was not the first time Captain Bernard had gone above and beyond to save lives at sea.

"This is the second crew saved by Captain Bernard during the last fortnight, having rescued the master and crew of the Brig Fidelity on the morning of the October 26, also, from a watery grave."

For their efforts in saving the crew of five men, Captain Bernard (spelled 'Barnard' in some reports) was awarded a second-service clasp, while his boat's crew of three men were awarded commendations.

One of the most tragic shipwreck stories in the local area involves the SS Conemara and SS Retriever, large steamships with passengers and cargo onboard, that collided at the mouth of Carlingford Lough on November 3, 1916. The Connemara was travelling from Greenore to Holyhead at the time, while the SS Retriever was on an inward journey from Garston in Liverpool to Newry.

During rough seas that evening, the cargo of coal onboard the Retriever shifted violently and it collided with the nearby passenger ship SS Connemara. Both ships sank quickly, with an appalling loss of 97 lives. There was only one survivor - a cabin boy from the Retriever.

Rather eerily, in the years after the tragedy, stories emerged of reported sightings of a 'Ghost ship', believed to be the PS Blaney, immediately prior to the accident. The PS Blaney (most likely the PS Lord Blayney) was a 200-ton paddle steamer that was wrecked near Prestatyn in Wales, on December 18, 1833, on a journey from Warrenpoint to Liverpool. 16 crew and 30 passengers went down with that ship. The only surviving living thing being a single pig that washed up on the shore at Prestatyn.

A stained-glass memorial to the SS Connemara and SS Retriever tragedy is visible to this day in St Patrick's cathedral here in Dundalk. 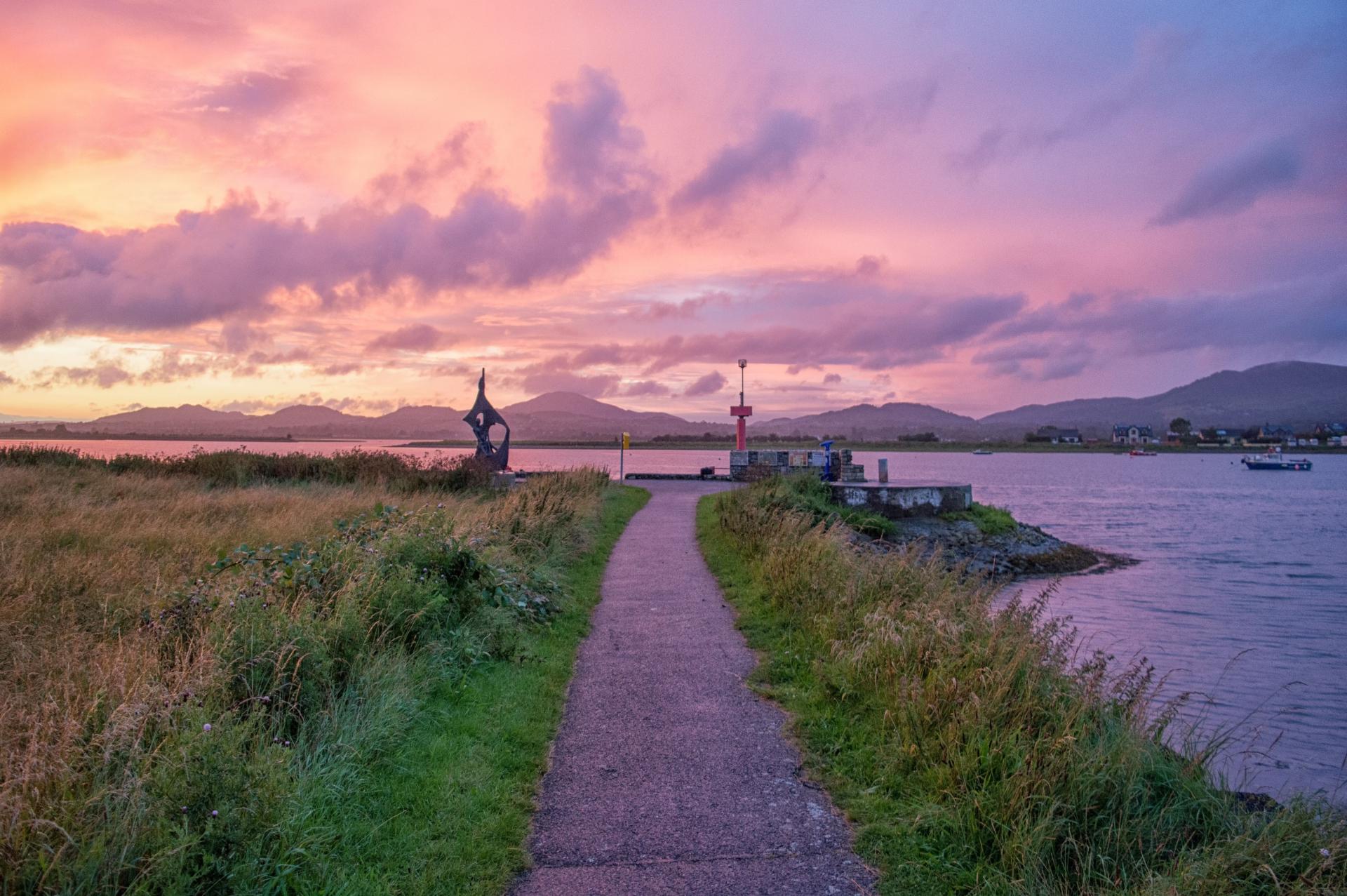 There are other, more mysterious, shipwrecks off the Louth coastline, for which information is harder to come by. There are at least 18 unknown shipwrecks in the area, many of which were only discovered during archaeological assessments for the potential development of off-shore windfarms in the past 20 years.

Just of Dunany point, lies the wreck of the SS Topaz, a three-masted schooner steamship which was enroute from Workington in England to Dundalk on December 28, 1891 with a crew of ten and a cargo of steel rails, when it encountered a force 4 wind and smashed into the nearby reef.

The vessel subsequently drifted into deeper water and sank quickly. However, the crew had managed to take to their ship's lifeboats just in time and eventually landed at Greenore safely some time later.

After the sinking, due to the Topaz's relatively shallow resting place in 16 metres of water, efforts were made to salvage its lucrative cargo of steel rails.

Between 1892 and 1893, the ship's insurer Lloyds of London employed the diver Rigden to retrieve the cargo. During this operation they also managed to salvage the ship's engines and working gear and removed its masts.

To this day, the ship's hull remains almost completely intact and it sits upright on the seabed according to the National Monuments Service.

One particular shipwreck, which is visible from the shore, is the Margaret and Ann, a 57 -ton schooner which ran aground at Annagassan at the Millrace Breakwater on December 7, 1888.

The wreck can be seen during low tide with the east side of the wreck almost flush with the surrounding seabed and the breakwater. Most of the ceiling timbers are now gone unfortunately, but some survive partially visible in places, according to the National Monument Service, which undertook an extensive project several years back to catalogue as many shipwrecks around Ireland.

Elsewhere, if you happen to emerge from the Spirit Store pub on George's Quay in Dundalk, you might - depending on the tide - just about be able make out a shipwreck before your very eyes.

The Night Watch, a 328-ton barquentine (a masted sailing vessel), was enroute to Dundalk on February 8, 1886, when it grounded itself close to beacon No 5 on the east side of the Navvy Bank channel. The ship was reported as being "leaky" when it entered the channel. Nine days later, the Night Watch was towed by a tug to the quays and docked. The crew were able to get ashore, thankfully. 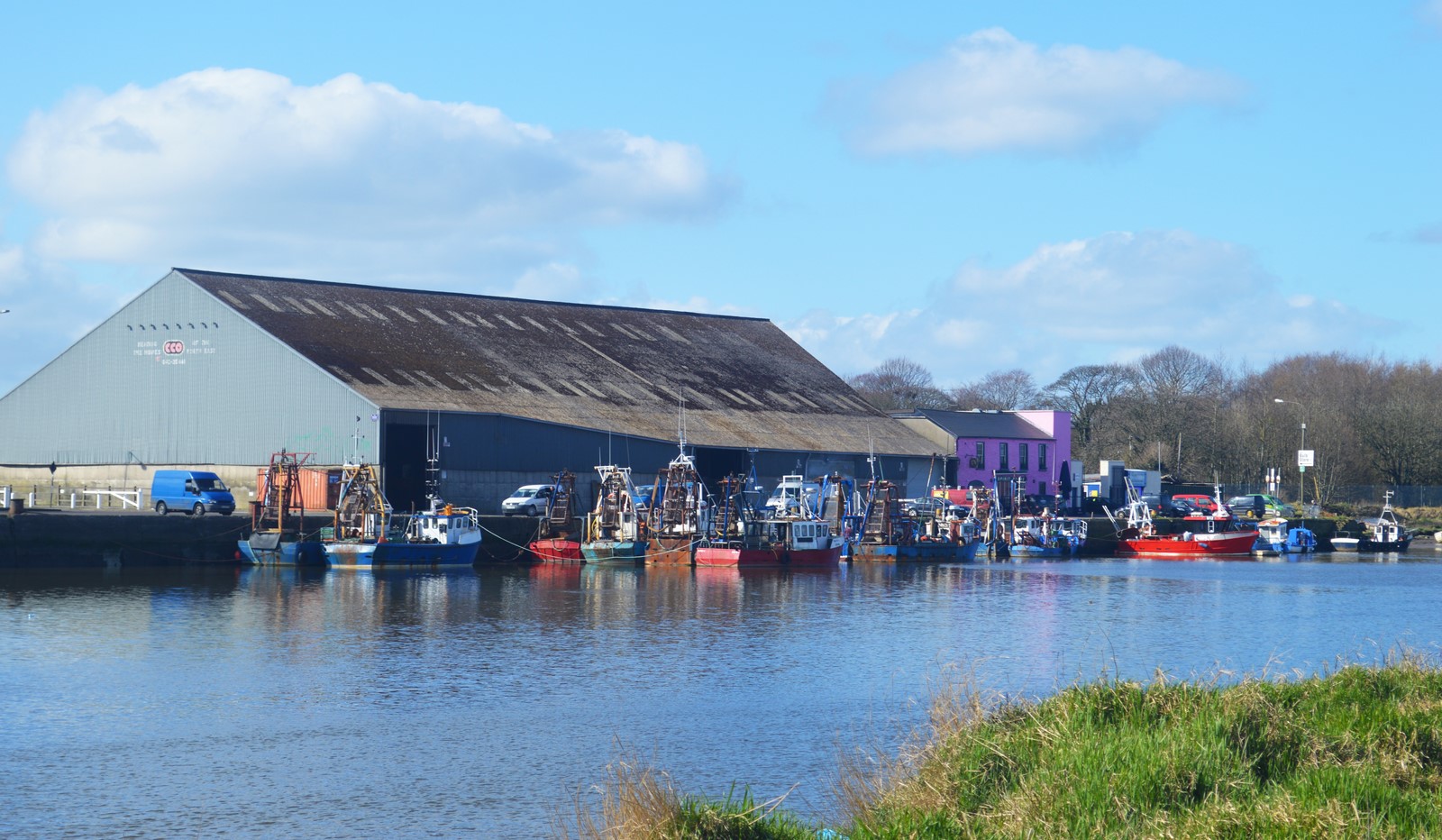 However, heavy winds broke the ship's moorings and the vessel swung out and came to rest against the quay wall, but just under the town's sewer. The crew returned to the ship, but the cargo of pitch pine, meant for Messrs Williamson, was discovered to be "awash with sewerage".

A protracted court case began in February 1888 as Messrs Williamson refused to accept the cargo and an argument regarding liability for damage dragged on.

The vessel itself was eventually moved from the side of the quay to its current location.

In the end, it was reported that a builder bought the ship's cargo.