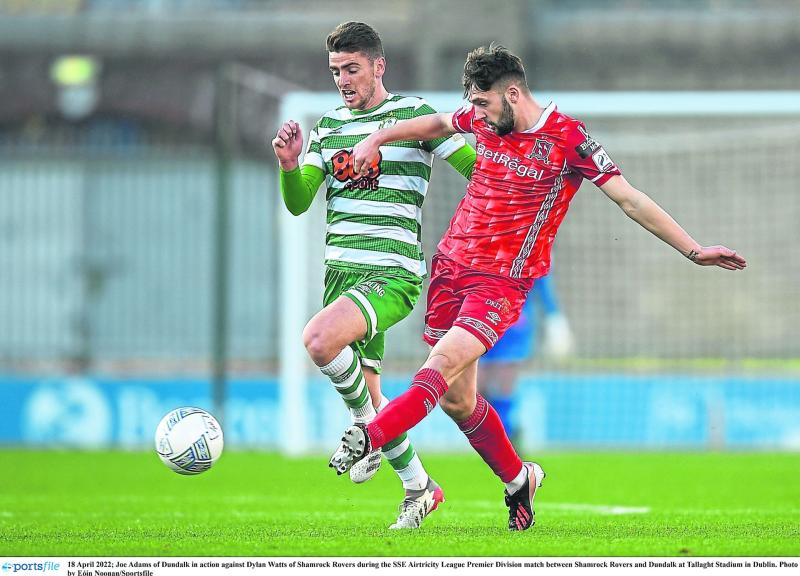 All eyes will be on Oriel Park this Friday night when Dundalk FC return to SSE Airtricity League action to take on Shamrock Rovers in a top-of-the-table clash (kick-off, 7.45pm).

Both teams return to competitive action following a two-week hiatus, and The Lilywhites come into the second half of the season in a positive mood having won four games on the bounce which propelled them up to second in the table ahead of the international break.

Their recent 1-0 win over St Patrick’s Athletic at Oriel put six points between themselves and O’Donnell’s former employers in fourth position, and another victory over Rovers on Friday would edge them to within five points of the table-toppers with a game in hand.

A bumper crowd is expected at Oriel, and Dundalk will draw plenty of confidence from the fact they haven’t lost in any of their previous three home fixtures against Rovers.

Earlier this season, the sides played out an entertaining scoreless draw, with Patrick Hoban missing a sitter right at the death as Dundalk had to settle for a single point.

Last year, Dundalk defeated Rovers on both of their visits to Oriel – the first of which was a 2-1 win last May, with Patrick McEleney and Daniel Kelly scoring in that match.

Sean Murray bagged the only goal when the sides met again last October as The Lilywhites moved closer to securing their Premier Division status for another campaign.

Rovers have won five of their last six league matches and played out a scoreless draw with promotion-chasing Galway United at Tallaght Stadium in a friendly over the break.

Dundalk warmed up for Friday with a mid-season friendly of their own against Bohemians at Dalymount Park – a game The Lilywhites won 3-0, courtesy of goals from Ryan O’Kane and Steven Bradley before a Rory Feely own-goal completed the rout.

Stephen O’Donnell was boosted by the return of John Mountney, who played 45 minutes of that match and is in line to make a full return to competitive action this Friday night.

Mountney, who played over 300 games for The Lilywhites between 2012 and 2020, returned to the club last December after spending a year with St Pats, but hadn’t played in over ten months when he sustained a knee injury playing against Dundalk at Oriel.

Those who made the trip to Dalymount for the Bohs friendly would have also caught a glimpse of Mark Byrne after he replaced Peter Cherrie in goal for the final 15 minutes.

The 21-year-old Knockbridge native has played for Warrenpoint Town and Newry City in the Irish League, and more recently, Monaghan United in the Ulster Senior League.

He will now provide additional cover for Dundalk behind Cherrie and Nathan Shepperd.
However, one player that won’t be lining out for O’Donnell’s team for the second half of the season is Welsh U21 international midfielder Dan Williams, whose season-long loan from Swansea City has been cut short after he picked up an ankle injury back in April.

“It’s unfortunate because Dan was doing really well, particularly in that game where we had to come off,” said the Dundalk head coach.

“It looked really innocuous, but the longevity of the injury means that Swansea City wanted him back there for pre-season.

“Dan added a lot to us,” he said. “He was a great teammate and a great person and it’s a pity the way it happened.

“I’m sure he’ll go back and be all the better for his experience of playing men’s football, week in, week out.

“We were delighted to have him here and we wish him nothing but the best in his journey at Swansea City.

“We will be tracking his progress and, hopefully, we will see him in their first team soon.”
Less than 24 hours after the full-time whistle blows on Friday night, Dundalk will play a friendly against Irish League outfit Larne at Oriel on Saturday afternoon (kick-off, 3pm).