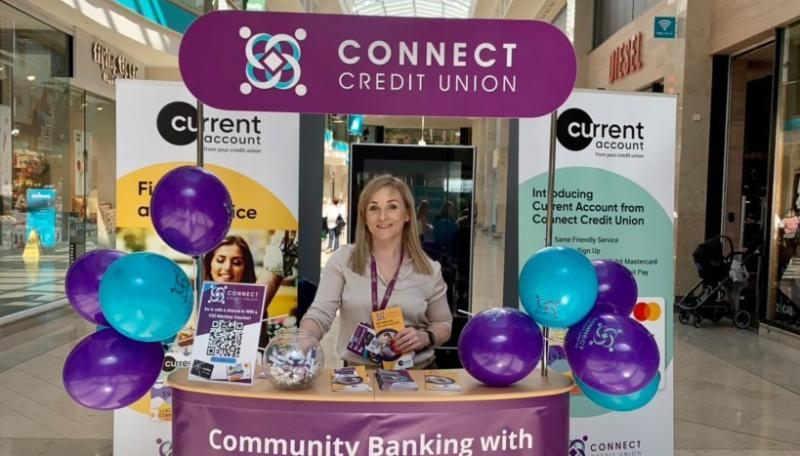 Staff from Connect Credit Union hosted a promotional stand in the Marshes on Friday the 22nd and Saturday the 23rd of April and were eager to inform the shoppers of Dundalk that they need to get thrifty when it comes to banking charges.

So many local people are now looking for a new financial provider on the back of Ulster Bank and KBC imminent closures, a Connect Credit Union spokesperson said.

Connect Credit Union is now a viable alternative for the many people who want to reduce their banking costs and save money.

The friendly, local and personal service is another attraction for those who prefer to transact with real people over the phone or in branch. At just €4 per month, the Credit Union current account is one of the cheapest on the market, the spokesperson continued.

Hundreds of shoppers stopped by the stand across the two days and had plenty of question for Connect Staff.

Naomi O’Donoghue, the Current Account Manager, said: “From speaking to people in the Marshes, it is clear that a lot of people are still putting off their bank switch.

“People think it will be a huge hassle but really, it’s just a minor inconvenience for those who allow us to help them”.

Staff at Connect Credit Union endeavour to make the bank switch as simple as possible, a spokesperson said.

Naomi added: “We encouraged everyone we spoke to over both weekends that regardless of who you choose for your new current account, get the process started sooner rather than later, as it is only going to get busier over the next few months.

“We have switched hundreds of Ulster Bank customers already and the feedback has been really positive. “People are delighted to have a real alternative, with a not-for-profit, member-focused institution like the Credit Union.”

Nia Fowden-Nevin, Account assistant was on hand to answer the many queries asked at the stand.

She said: “Yes, it is a real Mastercard Debit card! It can be used internationally at ATMs, online and point of sale! You can mandate your income to your new current account with 24/7 access via our full online banking and a very user-friendly app! Yes, you can get an overdraft! And, yes we can look after the switching process for you”.

Connect Credit Union were also on hand with a stall at Dundalk Market Square last Friday 29th April for any Ulster Bank, KBC or local people who were looking switch their bank provider to community banking with the credit union.

“The perception of using a credit union for only savings is the biggest barrier but with the introduction of Connect CU’s Current account we hope to break this misconception by switching Ulster Bank, KBC and those people who want to choose local banking as their number one financial provider.”

With Ulster bank and KBC looking to move out of the Irish market by 2022, Connect Credit Union team said they will be on hand in their three offices in Blackrock, Kilsaran and Clogherhead to help those in need to switch to community banking.

Survey says Louth workers among most eager to return to office