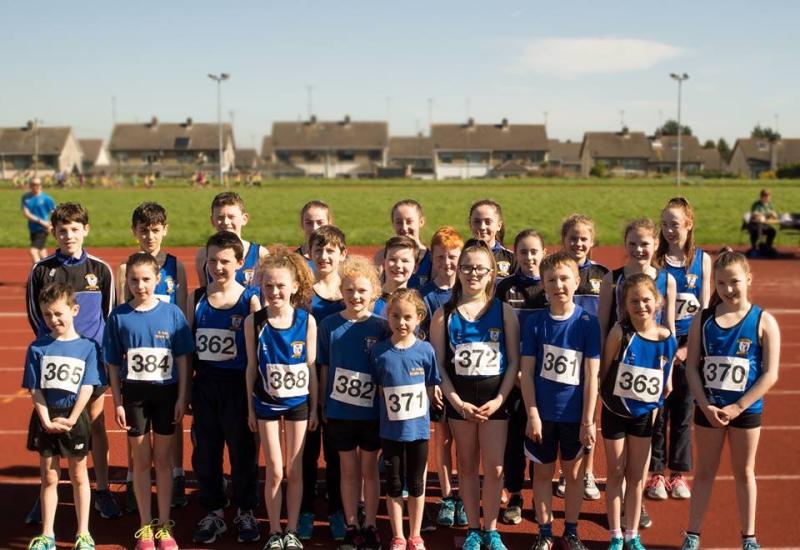 The long-awaited Track and Field season got underway in Louth at the weekend when the Pre-Louth Championships took place at the Lourdes Stadium in Drogheda. The large number of spectators were treated to a fantastic day of Athletics at the sun-drenched venue.

The day began however on a more sombre note when the chairman of the County Board Micheal Mulligan made an emotional speech and invited all in attendance to a minute of applause to the memory of 11-year-old Boyne AC athlete Killian Ekhator who very sadly had passed away the previous week.

The St. Peter’s Club had a big turn out and if the performances of the club’s athletes on the day are anything to go by then there is plenty of optimism for the Dromiskin based club in the year ahead.

The youngest member of the McLoughlin wasn’t letting her older siblings have all the glory having qualified for the final of her sprint and finishing just outside the medals she dusted herself down to win gold in the girls U11 long jump. Another family amongst the medals was the Allen family with Seán showing his best form for some time finishing third in the U14 800m and second in the U14 boys 100m to collect two individual medals.

Dearbhla continued on from her impressive cross-country season in 2017, taking a well-earned bronze medal in the girls U12 600m. Not to be out done by her older siblings, the youngest of the Allens, Niamh, won gold in the U9 girls long jump.

Lucy Brennan had an impressive season debut winning two silver medals in both the long jump and the sprint in the girls U13. Both Ellie Smyth and Isabeal Fitzpatrick also qualified for the final of the sprint, but narrowly missed out on medals.

Harry O’Reilly was back in form winning silver in the boys U12, but his sisters weren’t allowing him have all the glory with both Emily and Hannah also collecting silver medals in the U10 sprint and distance races respectively.

Ben McKeown had a great run in the boys U12 600m and looks like he could have a great season ahead of him. Mia Finnegan had a great performance moving up an age to finish high up the results in the girls U11 long jump. Catherine and Grace Carey had good performances in their respective events.

The club also had no fewer than four athletes making their track debuts with Ruairi Carpenter, David Shevlin, Aoran Ferris and Cian Smyth enjoying their first taste of track and field all will have gained great experience from their exploits.

Training continues on Tuesday and Thursday in St. Joseph’s GAA Grounds at Dromiskin at 6:30pm. New members are always welcome. The next event will be the Louth Championships which will take place over the weekend of the May 11, 12, and 13.