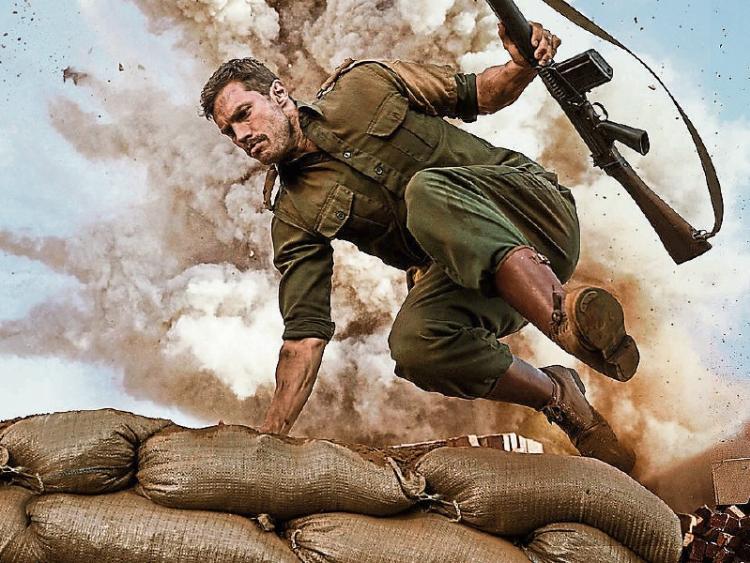 All is fair in love and war or so the overused saying, presumably coined by the “winners” goes. One would be hard pressed to find anything fair about the experience of the Irish troops stationed in the mining town of Jadotville in the Congo during the war there in the early 1960’s.

Now known as the Siege of Jadotville, the battle took place in September 1961, during the United Nations intervention in the Katanga conflict in Congo-Léopoldville, in Central Africa, when the aforementioned “A” Company of Irish UN troops led by Comdt Pat Quinlan, a Kerry man played here by the Fall’s Jamie Doran, were attacked by soldiers and mercenaries loyal to the Katangese Prime Minister Moise Tshombe. The lightly-armed Irish soldiers resisted Katangese assaults for six days as a relief force of Irish and Swedish troops unsuccessfully attempted to reach the Irish force besieged in Jadotville.

The initial attack by the Katangese occurred while many of the Irish troops were attending open air Mass, as you do with the enemy hoping and expecting to take the Irishmen off guard, the first attackers moved in rapidly but were spotted by an alert sentry. A warning shot by Sergeant Billy Ready alerted the company to the threat.

This set the stage for a five-day battle documented and detailed in the new film from director Richie Smyth. The film is adapted from the 2005 book by Declan Power, the Siege of Jadotville: The Irish Army’s Forgotten Battle in a screenplay by Kevin Brodbin who wrote the screenplay for the Keanu Reeves starring Constatine.

The outnumbered Irish company were eventually forced to surrender after ammunition and supplies were exhausted, but not before inflicting heavy casualties on the Katangese and their mercenaries. They were held as prisoners of war for approximately one month, but none were killed. It was the last engagement of the United Nations Operation in the Congo (ONUC) peacekeeping mission to involve Irish and Swedish troops in hostile action.

The film is suitably unflashy while delivering a solid war film. Doran is quietly impressive in the leading role as the inexperienced but courageous Quinlan. While Doran can at times appears a little stilted, ala the aforementioned Keanu Reeves, he is more than just a pretty face and he, like the character he plays here grows into his role as the Siege and battle unfold around him.

The lack of delving deeper into the company’s other soldiers is understandable given that the filmmakers clearly wanted to show the political machinations at play behind the scenes, as much as the personal struggles of the individual soldiers.

It is a bold move and one which makes the film stand out from the crowd.

What some older viewers may find most unusual and even humorous here is the role of British actor Mark Strong here playing Conor Cruise O’Brien, then special representative to the Secretary General of the UN (not long in existence), O’Brien is played with a Machiavellian zeal as we switch between the action on the ground at Jadotville and real politick going on in the background.

The powers that be care far more about their reputation of the UN and the appearance of things than they do about the welfare and safety of the Irish soldiers left stranded to fight for their lives.

I was reminded of the Terry George film Hotel Rwanda in its detailing of the damage ham fisted peace-keeping missions can extol on all involved, especially the innocent, when they go wrong. Viewers will also be reminded of the Michael Caine starring Zulu, which features the famous line: “Stop throwing those bloody spears.”

But where that film flounders over accusations of imperialist filmmaking, here the film manages to steer clear of such murky ground, any questions of this kind are placed firmly at the door of the UN rather than the troops on the ground and it is clear that these men are simply doing what their jobs entail and following orders, despite how nonsensical and suicidal those orders may seem.

Smyth handles the battle scenes with aplomb and gets the most out of a modest budget.

The achievement of these soldiers should not be underestimated, they were up against forces which outnumbered them twenty to one and managed to suffer no casualties while inflicting heavy losses on the enemy: more than 300 with many more injured.

The whole Conor Cruise O’Brien sections reminded me of the John Le Carre film the Constant Gardener and it is interesting to see the bureaucratic red tape that leads to the loss of life in these sort of situations. What works in these scenes is in its showing us the distance between the people who make decisions in a war or war zone and the people who bear the brunt of those decisions, decisions which are rarely made for the greater common good.

Despite this battle being one of the most impressive waged both in a tactical sense and a heroic one by Irish troops since the foundation of the state the battle or siege of Jadotville was not, until the early 21st century, given much recognition by the Irish state.

The term "Jadotville Jack" was sometimes used as a term of derision across the Irish Defence Forces.

After the incident no Irish soldier received any decoration for his actions at Jadotville, even though Quinlan recommended a number of his men for the Military Medal for Gallantry, Ireland's highest award for military valour, for their actions during the battle.

In 2016, the Irish government awarded a Presidential Unit Citation to A Company, the first in the State's history. It is the least these brave men deserve and this film will stand as a moving and suitable testament to their enduring bravery.

The film was released worldwide on Netflix last weekend.

You know what to do.