Defining generations: a look at the players who ruled the world 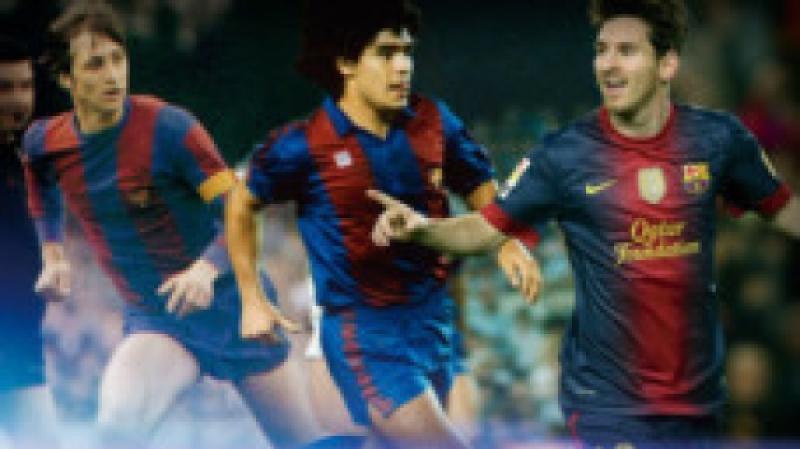 It’s often said that once in a while, a football player comes along who defines not just his club, not just the position he plays, but an entire generation within the sport.

It’s often said that once in a while, a football player comes along who defines not just his club, not just the position he plays, but an entire generation within the sport.

While naturally being talented enough to come to the attention of so many people, this player is not necessarily the greatest player around, but he makes the absolute most of his skillset against the prevailing tactics of the day to make himself a genuine winner, superstar and world-renowned name.

When others speak of a decade of football from days gone by, of major tournaments or of a style of play, this player’s name and image are almost without fail recalled.

But players who defined a generation? They perhaps came just afterward.

Go back to the forties, fifties and sixties and the likes of Di Stefano and Puskas were the titans of the game but new powers in the game were rising, and late in 1970, the first glimpse of a soon-to-be familiar sight was had.

Over in Holland, Ajax’s Dutch maestro Johan Cruyff made his return from injury, sporting the No 14 jersey, which was to become synonymous with him over the coming years. As Dutch ‘Total Football’ came to its peak, Cruyff was the magician who could do everything in the game. He had the technique, mentality and tactical discipline to do it all extremely well.

Total Football encapsulated the world for almost a decade spanning the late sixties and early to mid-seventies, and Cruyff was the face, core and idealism behind the movement.

In the post-Pele years, nobody came close to matching Cruyff for his impact on the game and defining an entire generation of the sport. Even now, years later, his impact, methodology and teams are spoken about arguably more than Rinus Michels, the actual coach in charge of Ajax - and Holland in the 1974 World Cup final - who devised and employed those tactics.

In footballing terms, generations do not necessarily fall directly in line.

Great players may have come and gone, but it could be argued that there was no player between Cruyff and Diego Maradona who could claim to define a generation of football.

Maradona, though, was spellbinding and watchable every time he took to the field. His own fire-starting brand of impacting on games was unmissable.

His inspirational ability to take a game by the scruff of the neck, his unstoppable array of skills and speed on the ball that made him such a compelling talent. That, and the red cards, drug addiction and trophy wins, of course.

The most curious period, perhaps, followed Maradona’s demise in terms of a generation of football. After he lost the World Cup final in 1990, Maradona’s career was basically over shortly afterwards, as he left Napoli after failing a drug test and receiving a suspension of more than a year.

Fast forward to the modern era of the game - which is dominated by Lionel Messi and Cristiano Ronaldo - was there a single, indisputable stand-out star in between?

The strength of the game in the nineties was arguably based in Italy’s Serie A, but while many candidates were playing at the very highest level, it is difficult to argue that any were held, or indeed are now held, in the esteem of Pele, Cruyff and Maradona.

Roberto Baggio, Marco van Basten, Gabriel Batistuta and perhaps most of the entire AC Milan defensive line all featured amongst the very best the game had to offer.

But with the potential exception of Paolo Maldini, whose career spanned a generation or two all by itself, perhaps only former Brazilian striker Ronaldo encapsulated an entire generation and an unsurpassed level of quality.

Alas, Ronaldo’s career was cut down by several years by lingering knee injuries, which robbed the game of what could have been the greatest out-and-out striker in the history of football.

And so to the current period of time, and the ongoing, eternal, life-sapping debate over whether Barcelona’s Messi or Real Madrid’s Ronaldo holds sway.

It’s plausible that, perhaps for the first time, the saturation levels of media surrounding the players and the game will mean that the actual rivalry between the duo will indicate that both players defined the generation.

And, after three decades of trying to discern whether Pele or Maradona, separated by decades of the changing face of the sport, were better than each other, maybe having such a direct comparison to enjoy won’t be such a bad thing.