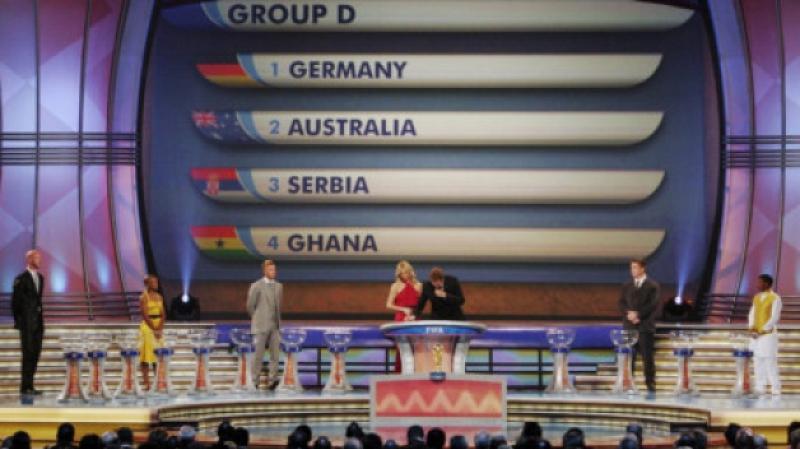 It’s always a particular shame when Ireland aren’t part of a major tournament; especially a World Cup in Brazil.

It’s always a particular shame when Ireland aren’t part of a major tournament; especially a World Cup in Brazil.

Can you imagine the swathes of Irish, mortgaging their homes and selling their children just for a few weeks of football and frolicking on the Copacabana?

That said, whether your country makes it or not, a World Cup is always exciting and the draw for the group stages in June is always one of the most anticipated pre-tournament events. Trying to predict the varying scenarios of who might face who, imagining the possible big clashes on offer – it’s like the ultimate football bingo, isn’t it?

Friday afternoon’s draw did not disappoint with a number of hugely interesting groups being drawn out. Unquestionably, one of the most difficult groups is the one that includes World and European champions, Spain; the Netherlands; South American dark horses Chile and Australia.

Spain may not be at the same level as the previous two tournaments but will still go to Brazil as one of the favourites, taking one of the strongest squads with them. Their recent downturn in is in alignment with that of Barcelona’s and that’s arguably down to the loss of form of two of their major stars in Xavi and Iniesta.

The Netherlands may have had a disastrous European Championships but the reinstallation of Louis Van Gaal as head coach has given the Oranje a new lease of life and their youthful squad is back to playing the type of football they’re so well renowned for. Chile – along with Colombia – are probably one of the dark horses of this World Cup. They have a squad packed full of talent and play a breathless brand of attacking football that will be hard to stop.

Australia? I hear the surf’s good.

Brazil are current favourites and rightly so. Their squad is phenomenally talented and in Luiz Felipe Scolari, they’re helmed by a World Cup-winning coach who’s been there and done it. Having seen them a number of times over the last year or so, they’re a squad that not only plays samba football but do so with defensive cohesion, too.

They’ve not got off lightly group-wise either, though. They’ll face Croatia, Mexico and Cameroon in a tough looking group but should have more than enough to come through it with a bit to spare.

One for the football hipsters is Group C, which contains Colombia, Japan, Ivory Coast and 2004 European champions, Greece. This one is particularly hard to call given the relative closeness in quality of each of the teams. Colombia will be favourites to progress and correctly so, possessing a formidable squad of talent spearheaded by Monaco hitman, Falcao and Porto’s Jackson Martinez. Japan will be ones to watch, though with a number of excellent, technically gifted players who run forever and then some.

Group G has the hallmarks of another group of death: Germany, Portugal, Ghana and the USA all bunched in together. You’d expect Germany and Portugal to qualify but Ghana and the USA won’t be pushovers by any means and factoring in the heat and humidity of Brazil’s weather might just give the latter pair a slight advantage.

And finally, England – oh, England, how we laughed. If we can’t enjoy Ireland in a World Cup, we’ll certainly enjoy our neighbours in one way or another. Just as you thought Roy and his boys would get their usual easy group, out popped their name to meet Italy, Uruguay and Costa Rica; the English nation winced as one.

On reflection, I don’t think it’s as bad as made out. Sure, Uruguay are a good side and they will be more used to the conditions but they’re practically still the same team who played in the World Cup four years ago – and that’s not good. Italy are Italy and will generally perform but they’re hardly a level above this England side, are they? The underdog tag should suit Roy Hodgson’s men. They can fly out to Brazil with little or no pressure on their shoulders and no overwhelming expectations of winning it.

When you look at the quality of side that’s qualified for this tournament, I’m actually glad Ireland haven’t made it. Sure, thousands of us would descend upon the plains of Brazil and the world would once more lavish praise on our supporters but if you thought we were out of our depth in Poland, Brazil would be an entirely different kettle of fish. This World Cup should be immense.