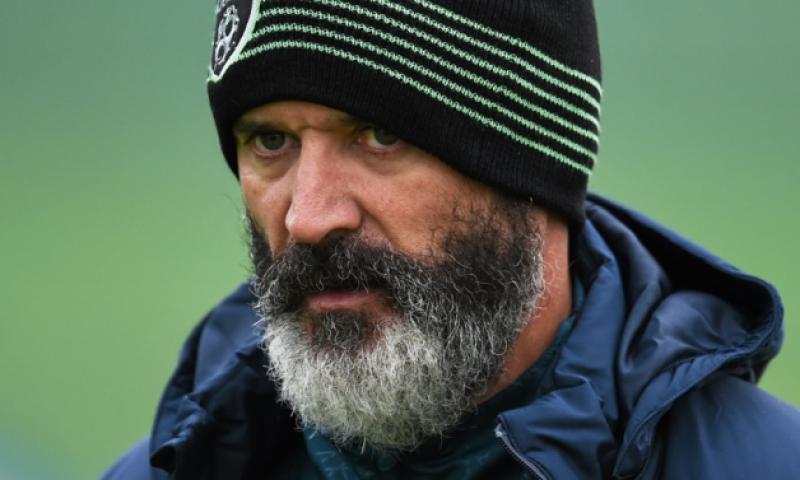 There are some unconfirmed rumours that when Roy Maurice Keane was delivered at birth, he was found to be struggling viciously with the umbilical cord; that acid tripped from his pointed tongue and that one nurse had to leave the room after being kicked square in the eye. All alleged events, obviously, but you get the picture: this Cork kid was going to be a fighter; every day of his life.

There are some unconfirmed rumours that when Roy Maurice Keane was delivered at birth, he was found to be struggling viciously with the umbilical cord; that acid tripped from his pointed tongue and that one nurse had to leave the room after being kicked square in the eye. All alleged events, obviously, but you get the picture: this Cork kid was going to be a fighter; every day of his life.

There’s a ferocity to Cork people that few Irish folk possess. ‘The People’s Republic’, they call it. And Keane may well be its head of state. As a youngster he struggled with ‘size’ issues. Not out of the ordinary for most men.

He overcompensated for this with sheer force: force of will; force of personality; force of tenacity. He carries it every day of his life. He wears it like a shield on his back. In his playing days, if it wasn’t his team-mates, the opposition or the manager he was fighting with, it was the media and the fans. As a manager and coach, they’ve still to be spared.

Any idea that Keane’s disposition would lessen with age and literary production has been ill-judged. Just as he played a good game, he talks a good one, too. In his latest tome you get the sense from reading it that he has taken a long, hard introspective look and, at times, doesn’t particularly like what he has seen. And yet, despite learning exactly where the potholes are, he can’t seem to stop himself from driving head first into them.

Controversy seems to follow the former Manchester United captain wherever he goes. Some of it is absolutely intentional. Some of it is not. The last week or so has shown that in abundance. The run-in with ‘super fan’ Frank Gillespie, was most definitely not of his making. In fact, there are suspicions it was actually a third parties’.

By now, you’ll have probably read about the incident and decided for yourself who was in the wrong - it was Gillespie, in case you were wondering. Keane actually dealt with the incident quite well; the fall-out afterwards, not so much.

In a press conference yesterday, he lost his cool in the face of some tough interrogation. Instead of learning from past mistakes and gracefully sidestepping that line of enquiry in a way Enda Kenny would be proud of, Keane reverted to his base instincts.

Backed into a corner – as he himself might put it – being poked and prodded with antagonist questions, he let loose. Verbal volley after verbal volley followed until the FAI’s press officer stepped in and shut it down.

The line of questioning was to suggest that the controversy – manufactured or otherwise - that seems to follow Ireland’s assistant manager was distracting from Ireland’s bid to qualify for Euro 2016. Whether that assertion has any merit is up for discussion (it’s nonsense) but whoever was asking the questions knew exactly what type of reaction they would get eventually.

Herein lies the problem with Roy. You get the feeling that, however learned he becomes of his volition, the ‘circus’ is just around the corner. Other coaches use it to their advantage.

Jose Mourinho is a master at making the headlines all about him and creating that ‘us against the world’ concept that helps to drive his squads but then he has the talent and achievements to show its productiveness. Keane does not.

These episodes only continue to exacerbate the idea, however flawed, that he is nothing more than a token emblem. A show pony to be trotted out whenever the going gets tough and a smokescreen is needed. Instead of debating and disseminating poor tactical decisions against Scotland last Friday night, we’re discussing Roy Keane and controversies and that is as much his fault as it is the media’s.

The wrong questions are being asked with the wrong answers being offered in return.