Buzz continues to grow about Kenny’s side 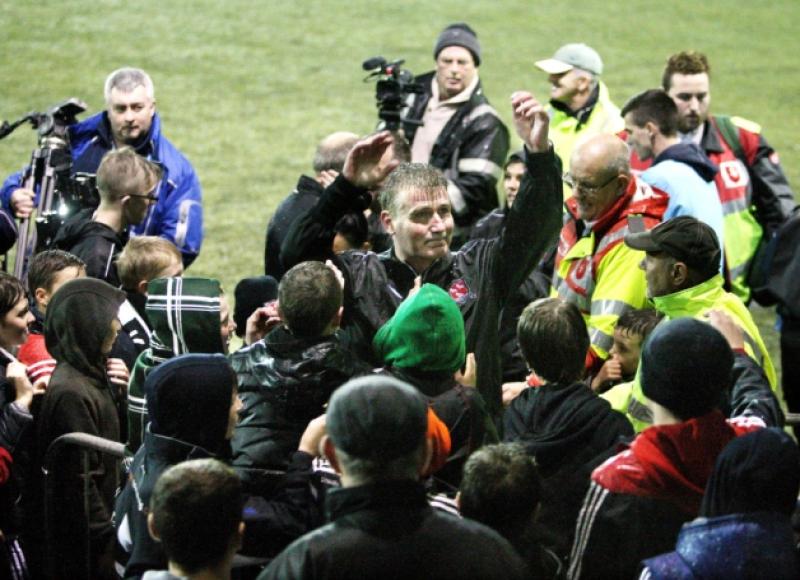 Admittedly, I’m not the greatest fan of League of Ireland football and haven’t been for a number of years but the news that a number of the stars who contributed to Dundalk FC’s fantastic season had signed new deals really gave me cause for optimism and no doubt filled the hearts of every Lilywhites fan out there with pure ecstasy.

Admittedly, I’m not the greatest fan of League of Ireland football and haven’t been for a number of years but the news that a number of the stars who contributed to Dundalk FC’s fantastic season had signed new deals really gave me cause for optimism and no doubt filled the hearts of every Lilywhites fan out there with pure ecstasy.

Having been a staunch supporter of the club as a youngster, attending Oriel Park regularly in the days of Brian Byrne and James Coll, I fell out of love with the game here in Ireland as I got older.

The club was a mess and seemed to stumble from one financial crisis to another as they yo-yoed between Division One and the Premier Division, with only the hardcore of hardcore support remaining.

Obviously, one of the main reasons why football in Ireland struggles is because of the overwhelming gravitational pull of the English Premier League on football supporters on these shores. Seduced and entranced by its glitz and glamour, the majority of us tend to concentrate solely on our adopted English teams and forget all about the natural charm and satisfaction of supporting our local sides.

I’ve always felt that the high turnover in players at League of Ireland clubs has been another major factor in the lack of significant support. Dundalk, in particular, have been victims of this. Year upon year the club have always tended to lose their best players to other more financially stable sides in the league or to clubs in England; Mark Quigley and Daniel Kearns being the main examples in recent years.

Football fans, by their very nature, support not only the club but the players themselves. They invest their time and adulation each season worshipping certain members of the squad so when there’s such a high turnover of them each season, it can be difficult to maintain that bond that helps forge the club closer with the supporters.

Only a year ago, Dundalk FC was on the brink of going out of business. In the space of those 12 months, they’ve manage to snag one of the best managers in the league, come very close to winning the title – securing European football in the process – and have had four of their players invited to train with the senior Ireland international squad.

If you found yourself smiling from ear to ear reading that, I would not blame you. I’d also have understood if you found yourself absolutely terrified about the prospect of losing the likes of Patrick Hoban, Richie Towell, Dane Massey and Stephen O’Donnell because of that success.

Of course, going on normal form, Towell would have left for a club like Leeds with Hoban, Massey and O’Donnell snapped up by clubs such as Shamrock Rovers, Sligo or league champions St Pat’s. In my view, the fact that they’ve all signed new contracts is testament to two things: Stephen Kenny and the fans.

Kenny brought the majority of these players to the club from relative backwaters. To think that a player of the quality of Richie Towell was playing for Bluebell United before his move to Dundalk is an indication of Kenny’s eye for talent. That the likes of Towell, Hoban and Massey have all spurned bigger money deals elsewhere, is down to a debt they owe to the manager, in my view.

The Dundalk fans have also played a massive part in this season. Arguably owning the best set of fans in the league, Oriel Park – and in particular “The Shed” – has roared on their team from the first minute to the last in every game. They’ve been a credit to the league and a credit to the town of Dundalk itself. What other side would bring a following of 1,600 fans with them to another league game? Some Premier League sides wouldn’t take that to an away fixture.

I think the players have bought into what’s going on at Dundalk FC and I think the buzz will continue to grow as Stephen Kenny moulds and shapes his squad ahead of a new campaign which will see European and Setanta Cup football.

The reincarnation of Dundalk has been a breath of fresh air. Not just the bust-to-boom story but the style of football and the Ultra-like support of the fans.

One can only hope the feel good factor that burns brightly around Oriel Park right now continues to smoulder because it can only be good for Irish football as a whole.