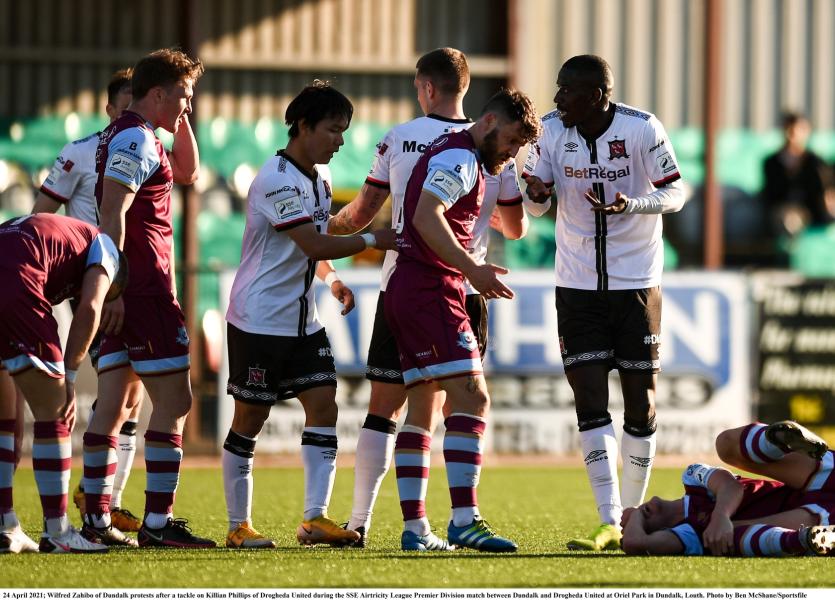 Dundalk FC will be hoping for a first win this month when they travel to Head in the Game Park on Monday to face Drogheda United in the second Louth derby this season.

Last time out at Oriel Park back in April, Dundalk recorded a 2-1 win over their neighbours, courtesy of goals in either half from David McMillan and Han Jeong-Woo.

However, according to head coach Vinny Perth, that result was just one of many ‘false dawns’ this season for The Lilywhites, who now sit eighth in the SSE Airtricity League.

Reinstated as Dundalk chief last Wednesday despite being sacked less that 12 months ago, Perth was back in the Oriel dugout for Friday night’s 1-1 draw with Longford Town.

On Friday night, Aaron McNally gave Longford the lead before Chris Shields – who is being linked with a move to Irish League champions Linfield – equalised in the first half.

“I don’t think there’s any doubt that we were the team most likely to win the game,” said Perth afterwards.

“Yes, we had a couple of moments. I haven’t fixed everything in two days. I never thought I would. They scored off one of the chances they had. Sam Stanton made an amazing block on another one and they hit the post.

“I’m not claiming that everything is fixed, but what I am saying is, that’s a performance that people should be proud of around the club and we’re proud of it as players.

“We’re not going to celebrate a draw against a team that’s below us in the league – absolutely not. But, if anyone wants to question that team’s performance, I’m not having it. I was very proud of them.”

Drogheda haven’t beaten Dundalk in a competitive match since the opening night of the 2014 season, when they stunned Stephen Kenny’s side by winning 4-1 at United Park.

Given the nature of the past week, Perth admits he’s had virtually no time to prepare for Monday night’s game with The Drogs, who were thrashed 5-0 at Bohemians on Friday.

“Over the last few years, I would have had everything done at this stage in terms of who we’re playing, what they do, their ground, all of that stuff. I haven’t done it yet. It’s been a whirlwind 48-72 hours at the club.

“People have their own spin on it, but that’s the truth from my perspective. It’s onwards and upwards from here on in, but there will be rocky moments. I think we’ve got people behind us from what I’ve seen tonight.”

Dundalk are expected to again be without Wilfried Zahibo, who is in quarantine after playing two friendly matches for the Central African Republic against Rwanda.

McMillan wasn’t in the matchday squad against Longford, but could return. However, Brian Gartland and Daniel Cleary are both long-term absentees for The Lilywhites.