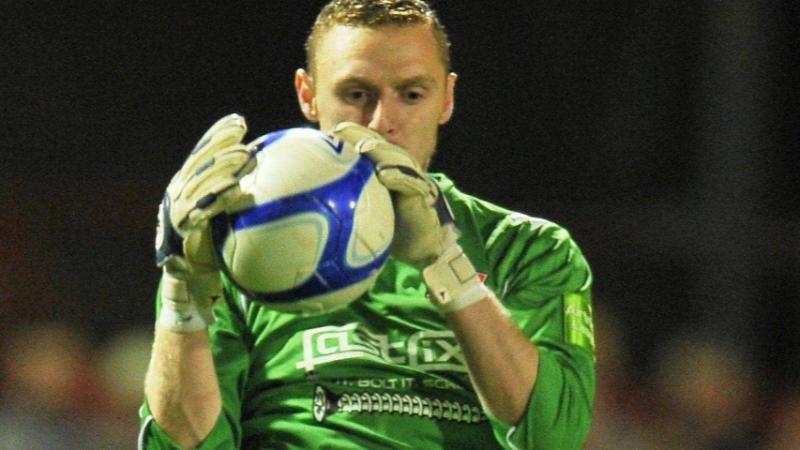 Peter Cherrie in action for the Lilywhites in the 2012 FAI Cup (Pic: David Maher/Sportsfile)

Peter Cherrie could be set to make a sensational return to Dundalk FC, six years after the popular Scottish goalkeeper departed a club for whom he played close to 200 league games.

With just one ‘keeper, Alessio Abibi, signed up for the upcoming 2021 campaign, Filippo Giovagnoli is anxious to add some reinforcements to provide competition for the Albanian.

American stopper Alexander Rando had been training with The Lilywhites in recent times, but it is understood that a move to bring the 19-year-old to Oriel Park hasn’t materialised.

Cherrie, 37, along with Tadgh Ryan, who played just three times for Waterford in 2020, have been training with the Dundalk squad over the past week as they both search for a new club.

Cherrie was released by Derry City back in December despite being first-choice with The Candystripes for two years, keeping goal in 52 of a possible 54 League of Ireland matches.

The Scot had also been training with St Patrick’s Athletic, managed by ex-teammate Stephen O’Donnell, but an emotional return to Oriel is thought to be Cherrie’s preferred destination.

Originally brought to Dundalk from Clyde in 2009 by Sean Connor, it didn’t take Cherrie long to dislodge his fellow Scotsman Chris Bennion as the club’s number one – a position he held right up until his departure after becoming an LOI winner at the end of the 2014 season. After leaving Dundalk, he had spells with Cliftonville, Bray Wanderers, Cork City and Derry.

In terms of departures, 19-year-old Jamie Wynne, who came off the bench in December’s 4-2 Europa League defeat to Arsenal in Dublin, has dropped into the First Division with Cork.

Wynne, whose sole league appearance came in a 4-0 home defeat to Shamrock Rovers last September, links up with Cork in their bid to make an immediate return to the top-flight.

Another player that had already departed Oriel, ex-United States international Joshua Gatt, has found a new employer in the form of USL Championship outfit Pittsburgh Riverhounds.

Off the field, Dundalk have made two new additions to their backroom team with goalkeeping coach Graham Byas and club doctor Dualtach Mac Colgain both joining.

Byas, who succeeds Steve Williams, has previously worked with Longford Town, Shamrock Rovers ‘B’ and the St Pats U19 side. Mac Colgain has worked with the Meath GAA team for the past two years and replaces David Connolly, who stepped away from the role in January.

He told the club’s official website: “It’s a proper league, isn’t it? You’re telling me that winning the league after 18 games is winning a league? It’s not. It’s like being top of the table in June and saying ‘we won the league’. Come on. Let’s be realistic here.

“Before we went into the games last summer, I said it was ridiculous. I could not see myself, if we had won the 18-games last season, celebrating like we had won the league, especially after winning three before that. I just couldn’t do it.

“I saw last year’s league as a chance to win a Champions League spot and we didn’t do that. We finished third, and although we qualified for Europe, it was still disappointing, but this year we have to try and retain what’s ours, which is a 36-game, proper league.”

It just so happens that Dundalk’s first competitive game of the new season will take place against Shamrock Rovers at Tallaght Stadium in the President’s Cup on March 12th.