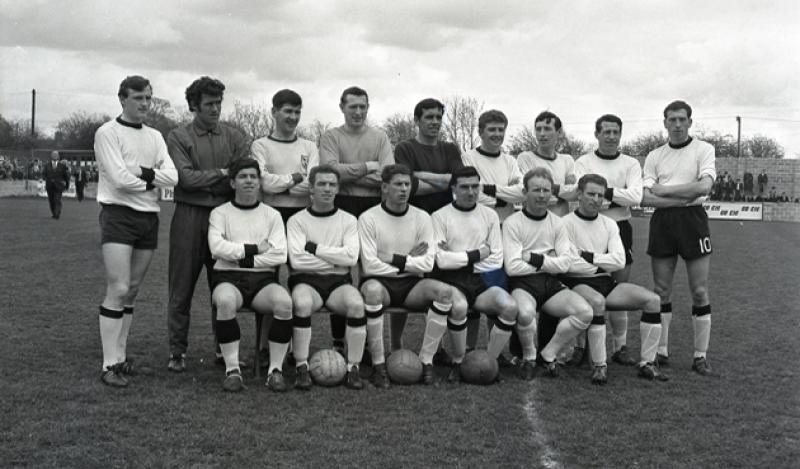 The Dundalk 66/67 team that Ben Hannigan won the league title with.

Tributes have been paid to former Dundalk FC player Ben Hannigan who sadly passed away yesterday at the age of 77.

The Dubliner had a storied career in the sport, winning a league title, a Dublin City Cup and League Shield with the Lilywhites along with also lifting the league trophy for Shelbourne and Cork Celtic in a career that spanned 20 years.

“We are saddened to hear of the passing of 1966/67 league title winner and ace striker Ben Hannigan” stated Dundalk FC, “Ben played 91 times for the club, scoring a mightily impressive 51 goals. Our condolences to his family and friends. May he rest in peace.”

Hannigan was best known for his time with Shelbourne where the prolific goal scorer had three different spells, winning the league and cup during his time at the now Tolka Park based club.

“It is with deep sadness to announce the great Ben Hannigan has passed away this afternoon,” Shelbourne FC said in a statement yesterday.

His other major honour came for Dublin rivals Shamrock Rovers, where he won a second FAI Cup and the Hoops took to Twitter to offer their condolences to one of the great legends of the League Of Ireland game.

“All at SRFC offer sincere condolences to the family and friends of past player Ben Hannigan who died today. Ben made his debut on the 6th Apr 1969 and was part of the Cup winning side in his first season. Ben scored 5 goals in his 15 appearances for the club. May he rest in peace.”

Hannigan played for nine different clubs from Ireland, Wales and even Germany for a short spell with Fortuna Koln finishing up with 89 goals in 206 appearances in Senior football leaving a legacy to the game that will not be forgotten as one of the great attacking players of his era.