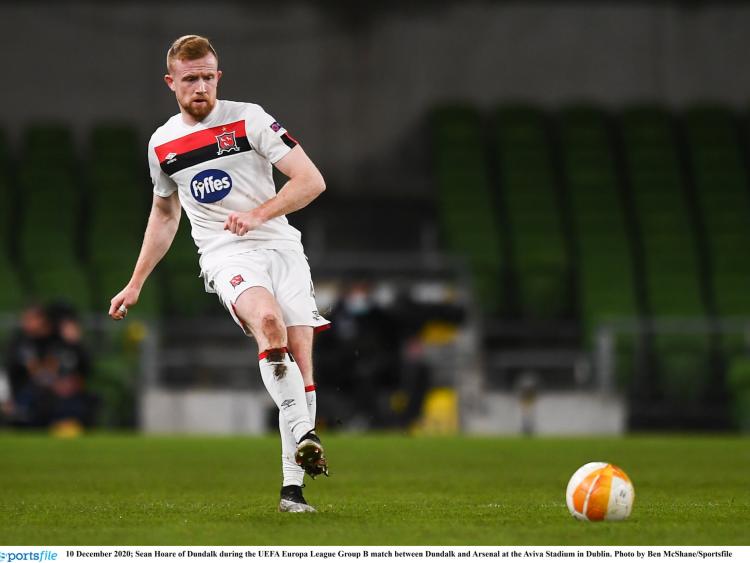 Dundalk FC have been hit with their second high-profile departure of the close season, with Sean Hoare leaving the Oriel Park club today, to sign for their fierce rivals Shamrock Rovers.

It’s understood that the foundation for the out-of-contract Hoare’s move to Tallaght Stadium was laid several weeks ago, but Dundalk had made a last-ditch attempt to keep the defender.

Hoare made over 100 appearances for The Lilywhites since joining from St. Patrick’s Athletic in 2017, and recently scored against his new employers in the FAI Cup final.

His last contribution in a Dundalk shirt was a headed goal at the Aviva Stadium in last Thursday’s 4-2 Europa League defeat against English Premier League stalwarts Arsenal.

Hoare is the second high-profile player to have left the club since the 2020 campaign ended, with legendary goalkeeper Gary Rogers announcing his retirement from playing last Friday.

The club’s new sporting director Jim Magilton started his new job this morning, and with just nine first-team squad members so far signed up for 2021, he can expect a busy inauguration.

Magilton, who is believed to have signed a four-year deal with the club, should be formally unveiled this week, while BetRegal have been confirmed as the main sponsors for two years.

Several out-of-contract players are expected to remain at Oriel, something that also could be announced this week, with Sean Gannon, Brian Gartland and Michael Duffy all offered deals.