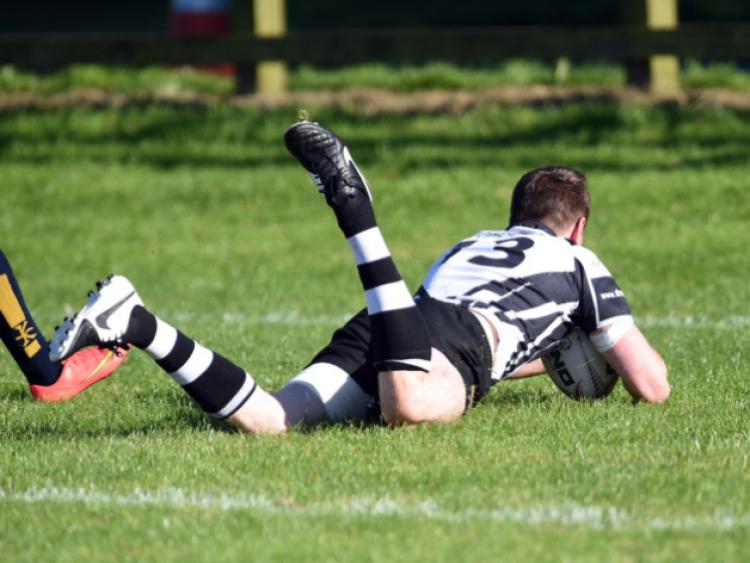 In their fourth game in the Leinster League, Dundalk beat Monkstown 32-3 away from home to leave them firmly on top of the table.

In their fourth game in the Leinster League, Dundalk beat Monkstown 32-3 away from home to leave them firmly on top of the table.

An aggressive start from the home side gained results, good ball retention and interplay between forwards and backs brought play into the Dundalk 22, Paul Meegan in the Dundalk pack was deemed to have strayed offside, and Monkstown kicked the resulting penalty and put themselves in a 3-0 lead after only four minutes of play.

They were high on confidence coming into the game after their impressive comeback and win against Ashbourne last week coupled with having home advantage on their side.

However, if they were buoyed by their initial gain it was to be short lived. Perhaps leaderless through the loss of their captain or inability to deal with the organised assault from Dundalk, Monkstown found themselves in a difficult place.

With the initial testing of the waters over, Dundalk quickly assumed control of the contest and the home side had a job on their hands trying to fend off the superior opposition.

The Dundalk forwards hunted like a pack, each knowing their role and suffocated Monkstown’s distribution of the ball.

In an attempt to stop Dundalk the Monkstown number six infringed and Dundalk were awarded a penalty but from a difficult position which they elected to kick, Ultan Murphy’s kick was narrowly wide and after eight minutes the home side remained three points to the good.

Ruck after ruck saw Dundalk gain position in the Monkstown 22 and finally out of frustration they duly conceded a penalty, which Ultan Murphy had no difficulty in kicking on this occasion after his uncharacteristic earlier miss and at 12 minutes the score was even.

Switching their efforts to the backs in an attempt to change their fortues and try to regain some control of the contest, Monks town met with ferocious resistance, smothering tackles from Chris Scully and Owen McNally’s hard hitting knocked the capital side back time and time again and as Monkstown spilled the ball forward Stephen McGee gathered the ball and returned the play back into their half as the pressure continued to mount.

Then, presented with clean ball Thomas Campbell passed from the base of a ruck to james McConnon running on the blind side who fixed the defence and offloaded to Chris Scully who went under the posts for Dundalk’s first try.

David Whately, James McConnon and Tiernan Gonnelly surpassed any Monkstown attempts to gain ground at the fringes of the ruck while Johnny Grey and Robbie Farrell held firm in their more direct assaults while powerful scrimagging from Dundalk and dominance in the line outs left the home side bereft of ideas.

Just before the break, Johnny Grey regained control of the ball and the excellent Jonathan Williams saw an opportunity. The number 10 was having an outstanding game, with crunching tackles and a mastery of his position having him take on the look of a ringmaster.

He passed the ball to team captain MJ McKevitt, Williams looped in support and having moved through the backs the ball was played back to Williams who crashed through to score a try. The conversion attempt was missed and at half time the score was 15-3 to Dundalk.

Mindful of the fact that Monkstown came back from 19-0 to beat Ashbourne only last week, Dundalk would have to be attentive and exercise the same firm control as in the first half. An early surge from the Dubliners was repelled and Dundalk began to lever a vice like grip on the game with the home side seemed almost bedazzled at the speed and accuracy at which Dundalk moved the play.

Jonathan Williams was creating opportunities with almost every touch a perfect pass and another of those put Stevie McGee into open space who glided over to score and Murphy added the from the conversion to move his side 19 points in front and dispell any faint hopes of a repeat comeback performance that the hosts had produced the week previously.

Dundalk continued to turn the screw and more pressure from the league leaders saw the home side concede another penalty, converted by Murphy and at 25-3 there was certainly to be no way back for the hosts with 28 minutes of the second half played.

Lotu Nuku put a great deal of pressure on a hapless Monkstown defensive effort in the latter stages, David Whatley ripped the ball from his opposite number and gave it to Williams.

Again he found McGee with some space to move into and from the halfway line, he wasn’t going to be caught as he steamed forward to add his second try of the afternoon and cap a successful outing.

Murphy again converted and Dundalk finished with a comfortable 32-3 win and added a bonus point for themselves, as a reward for clocking up four tries.

The league now takes a break to allow for the All Ireland Cup. Dundalk play Cobh Pirates, set to be played at the Mill Road, on October 25.