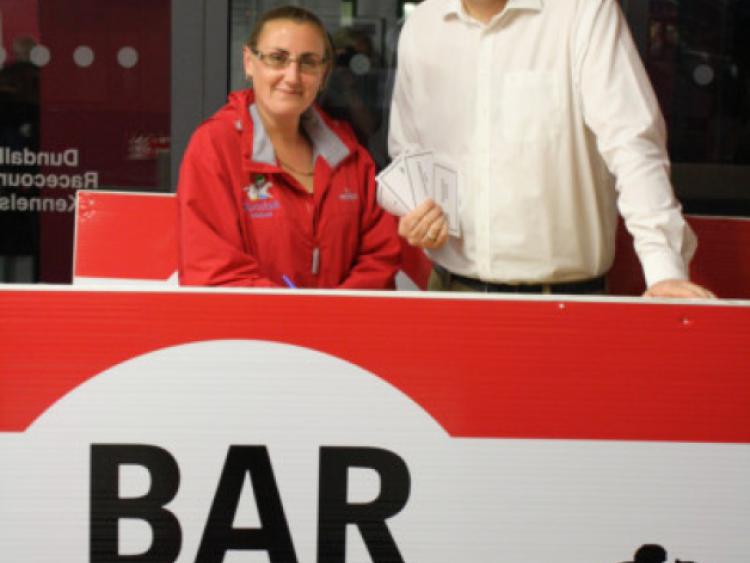 The Monaghan flags will be out again, not for a football match, but the big greyhound race taking place at Dundalk Stadium on Sunday night next.

The Monaghan flags will be out again, not for a football match, but the big greyhound race taking place at Dundalk Stadium on Sunday night next.

The feature on the second half of the stadium’s second big dual-purpose programme of the year is the Bar-One Racing Irish Sprint Cup final, and in there pitching for the €20,000 first prize will be Steely Passion.

This lassie is owned by Castleblayney girl, Terry Kerr, and trained by Terry’s mum, Catherine, with the able assistance of her husband Joe. She’s a half-sister to 2012 finalist, Town Ruffian, and Boylesports International winner, Quail Hollow – both owned by another Castleblayney native, Kieran Lonergan. Though certain to be among the outsiders, she has the ideal draw to cause a surprise.

Steely Passion runs from trap one, and in making it to the final has finished third in each of her four preliminaries.

She’ll be looking for all the luck available, but who knows? - if she’s on the premises going to the bend, crowding among the better-fancied runners could see her nick a lead before turning in.

He runs from three, where he was housed twelve months ago before scorching to an emphatic win in a flying 21.01. The two semi-finals were run on Saturday night last, and in the first of them, Leeview Dave broke well from one, setting himself him up for a comfortable win. All of the others met with trouble at the bend, and when they sorted themselves out, Farloe Calvin had the call, showing in front of Cambushmore.

The English challenger, Tayl Bound, was missing from the second semi, having injured himself in a midweek gallop. In his absence, Razldazl Rioga easily justified odds-on favouritism, coming home clear of Cloughtaney Gift and Steely Passion.

Razldazl Rioga, the oldest of the finalists, is trained by Dolores Ruth for former RTE sports commentator, Miceal O’Muircheartaigh. He’s a most consistent performer, but won’t be suited by a draw on the wide outside.

In contrast, Leeview Dave is beautifully housed in trap 2, while a three draw won’t inconvenience Cambushmore in his bid to become the first to successfully defend his crown in the ten-year history of the event.

We’ll side with Leeview Dave, who’s been given a 5/4 quote by the sponsors, and Cambushmore could take second, giving trainer Holland a one-two. Steely Passion is not without a chance opf taking third spot.

The card will also feature the finals of five competitions along with a series of Opens.

First race is at 7.30pm, and by then the runners from the afternoon’s horse racing will be well on their way home.