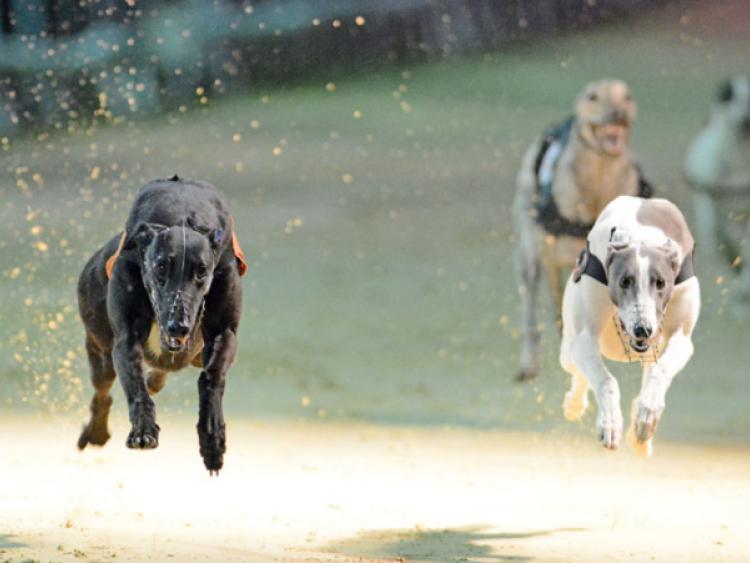 Colm Lawrence should be excited about the excellent sprinter he has currently housed at his Blackrock kennel.

Colm Lawrence should be excited about the excellent sprinter he has currently housed at his Blackrock kennel.

Tullna Band won for the fourth time on his eighth outing at Dundalk Stadium on Saturday night, returning a very fast time for the 350.

The record for this distance is held by Kildallon Ranger, whose 18.49 was recorded two years ago. Tullna Band went around in 19 spots slower when leaving a smart field in his wake. The winners of 29 races were included among the opposition, and Tullna Band had their measure from an early stage.

The December ‘11 whelping broke fast from two, had two lengths on his nearest rival at the opening bend, and at the line was three lengths ahead of Monleek Montana.

Joe Kelly made his trip from Kildangan pay rich dividends, each of his two runners scoring handsomely over the 525 on the same card. Hatiachi Persie and Hitachi Tara are litter-comrades, the essence of Co Kildare breeding, being by Lughill Jo and Noirs Bluebell.

Persie, a well-made 76-pounder was, like his sister, on his second outing having taken a tumble on his debut at Newbridge in late February. If he was affected by that experience it didn’t show here.

Taking a flier from four, the April ‘12 quickly opened up a lead, and going down the back had a six-length lead on Lip Bound. The dividing margin got bigger as the race progressed, the 5/4 fav crossing the line eleven and a half lengths clear of his nearest rival. The time was good – a night’s best 28.71.

Hitachi Tara didn’t go quite as fast, nor had she her closest challenger as far back. But 29.04 is not a bad return, nor was there ever much danger of her losing the lead she nicked off Mayo Cracker going to the first bend. Maintaining a strong gallop, the red-sheeted Tara finished the race with a four and a half length lead over Mayo Cracker.

We could be hearing a lot about this duo in the months ahead.

After the previous week’s glut of local winners, Tullna Band and Wolowitz were the only ones from around these parts to register. Wolowitz is trained at Peter Noone’s in-form kennel, and in scoring over the 525 made it a successful Dowdallshill debut. The English-owned dog won in a photo-finish, recording 29.34.