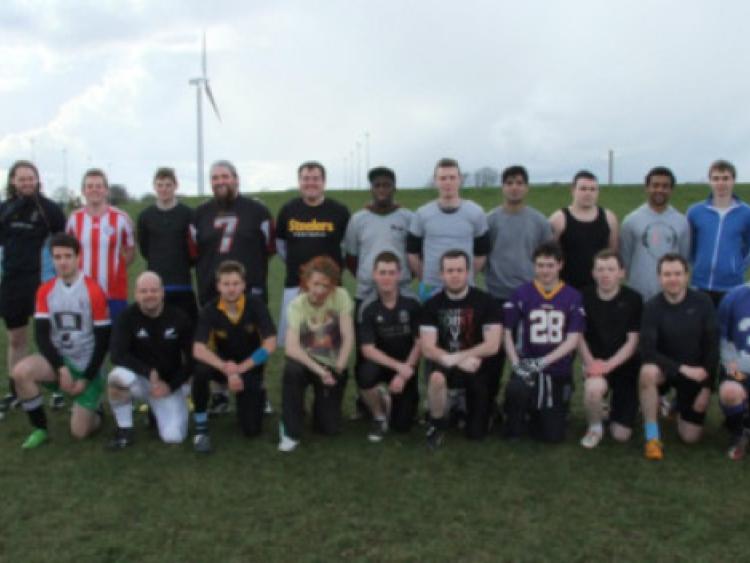 An American Football team in Dundalk? It’s not exactly the first place that springs to mind when you’re watching the Superbowl extravaganza unfold in some glitzy high-rise metropolis across the Atlantic.

An American Football team in Dundalk? It’s not exactly the first place that springs to mind when you’re watching the Superbowl extravaganza unfold in some glitzy high-rise metropolis across the Atlantic.

Not only that, but the newly formed Dundalk Mavericks are aptly titled for one other reason - their head coach is a woman.

For a game steeped in testosterone that’s quite something indeed.

The coach in question is Drogheda native Sarah Matthews. Having helped bring the Drogheda Lightening into existence a couple of years back, Matthews is ready to bring the glamour of American Football to Dundalk.

It’s certainly not going to be an easy proposition, not that you’d guess that from Matthews’ determined manner and enthusiasm for the sport, and in particular the future promotion of the sport in this town.

“In many ways this is the perfect time to set up a team in Dundalk. There is a great catchment area here, it’s a huge town. Of course we’re still in the early stages, it’s brand new, but we’ve already had great interest from people locally”, explained Matthews.

What with several sold-out NFL games being played in London recently and the American Colleges match in the Aviva Stadium between Navy and Notre Dame last year, there certainly appears be an interest in all things Yankee at the minute.

But this is a country dominated by the twin titans of gaelic and soccer, and with funding sparse, how will American football stand a chance of prospering?

“It is difficult”, admits Matthews, “like a lot of clubs in all sports, we run on membership fees at present. But we’d love to get sponsorship. There’s a glamour and novelty attached to the game and it could be attractive to a few businesses.”

As Matthews puts it, the current squad of 30 players are lining out “naked” at present, in the sense that they do not have jerseys yet and play in there own gear. That squad number may seem extensive but as Matthews explains, the average American Football team consists of 50 players.

It’ll take time and dedication, but that’s something Matthews has plenty of. Dundalk Mavericks have been granted a formative membership by the Irish American Football League already.

It basically means they have a year to organise themselves without having to compete in any competitive matches. After that the League will assess whether they can enter the IAFL league in this country, which is the Championship to the Premier League in Ireland - to use the English soccer parlance.

Ireland has sixteen teams playing American football. The League itself is still in its infancy, but the signs are good and if the website is anything to go by, there is a will to keep improving and expanding.

Sarah’s own love of the game stems from when she was younger and her fascination with all things American. She lives and dies the sport.

“We still play John Madden Football on the Xbox and even though it’s the off-season in the NFL in the States we still talk about the next big players coming through the ranks and the draft for next season. It means everything to us.”

The Dundalk Mavericks train every Sunday at the DkIT pitches between noon and 3pm.