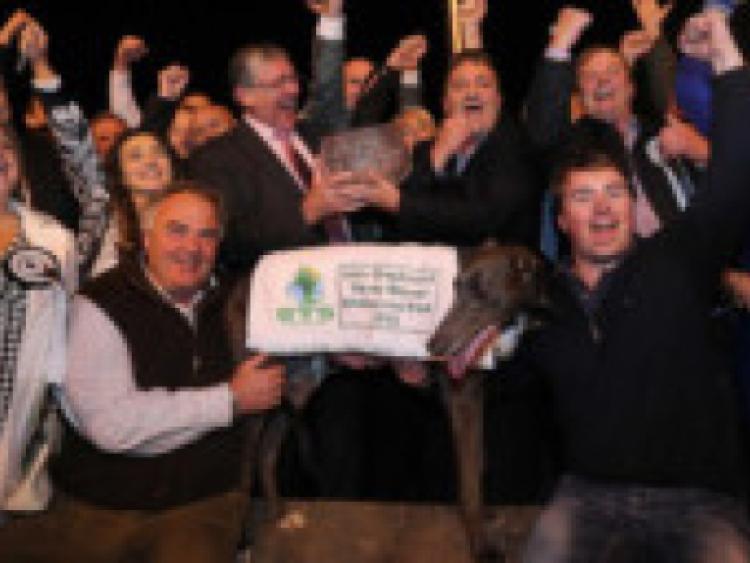 When he most needed to, Slippery Robert, carrying the hopes of Jenkinstown owner, Larry Dunne, ran the race of his life, his wonderful back-straight surge carrying him to victory in the final of the ETS Irish Derby.

When he most needed to, Slippery Robert, carrying the hopes of Jenkinstown owner, Larry Dunne, ran the race of his life, his wonderful back-straight surge carrying him to victory in the final of the ETS Irish Derby.

This column said last week the youngest and least experienced of the five finalists had a chance. Too true – and how well he took it. On offer at 5/1, fourth in the betting behind Tyrur Sugar Ray, Ballymac Vic and Cabra Buck, Slippery Robert broke well from the wide outside trap, and was second behind Cabra going round the opening bend.

Cabra Buck ran wide down the back straight, but Slippery was further out the field. But, crucially, he was going the better of the two. There was huge roar from the packed stands when he went to the front nearing the third bend.

There was no challenge from any of the inside runners, and the title was as good as Robert’s when he turned for home in front. He stayed on well to win in a very fast 29.43. Cabra Buck held on for second, while the favourite, Tyrur Sugar Ray, fared the better of the other three.

Victory for the dog he bred himself from his brood bitch, Steamy Windows, was a dream come true for Larry Dunne. He’s renowned for his exploits in the betting ring, but he can turn them out, as they say. He has a very successful team at his kennels, headed by Aidan Finnegan and his wife, Anne-Marie.

Slippery Robert, however, was prepared for the country’s premier Classic by Robert Gleeson, a 25-year-old who has his kennel at Rathangan, Co Kildare.

Dunne has been in the greyhound game all his life, and was, no doubt, influenced by the exploits of his late father, also named Larry, who was a Department vet attached to the old pork factory on Dundalk’s Long Avenue.

Junior was associated with a Classic winner before. Soon after the new Dundalk Stadium opened, he sent out Sycamore Dan to win the Bar-One Irish Sprint Cup, the Cork-owned dog winning the final in a record time.

There were many local faces in the background – owner Dunne’s brother, David, among them – for the presentation of the trophy. Winner’s prize was a whopping €125,000.

Shelbourne Park was crammed, and there were many attractions other than the greyhound racing. Mike Denver was on stage from early in the afternoon, and there was a best dressed lady competition. By coincidence this went to a race goer who lives only a stone’s throw from the Derby-winning owner.

Orla Byrne (nee Finnegan) was at the meeting with her garda husband, Declan, and while the couple’s focus would have been on the racing, they having a kennel at Rockmarshal, Orla’s win was a pleasant distraction.