COMMENT | What chance have Louth GAA referees got when national whistlers won't apply the rules fully? 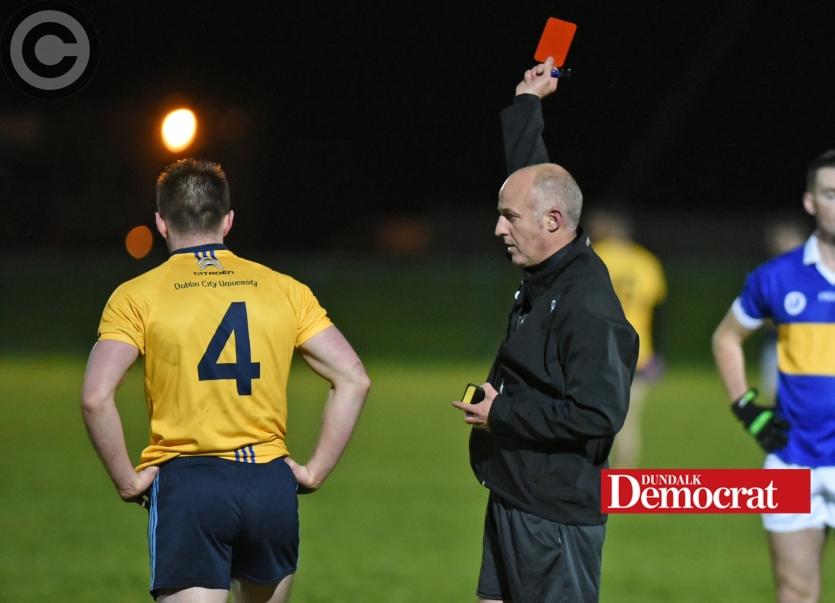 Meath man Cormac Reilly, shown to be in charge of a Sigerson Cup game between DCU and DkIT, is part of the Louth panel of referees on behalf of the St. Nicholas club. (Pic: Ciarán Culligan)

There won’t be a Gaelic football follower who hasn’t got a pet-hate in relation to the rulebook. And there is unlikely to be an observer who believes the newly-introduced glut of guidelines are either beneficial to the spectacle or those participating.

The basics of the game have remained pretty much the same for years: the object is to score more than the opposition, a goal is worth three points and a point exactly what it infers. You must either solo or hop the ball before or on your fourth step. Pretty simple really.

I remember standing at an underage game last year, a tight affair in which the stakes were high, and asking - rather loudly - for an opposition player to be done for overcarrying. I got the dirtiest of dirty looks from a person standing a few metres away. The young lad had only received the ball but was on his sixth or seventh step before playing it. It was a foul which, frustratingly, wasn’t penalised.

But sure if an All-Ireland final referee - Cork’s Conor Lane - saw it okay for Eoin Murchan to run not just a mile, but an Irish version, before scoring a game-turning goal in Dublin’s favour last year, what chance has a local volunteer racing to a venue from work?

There have been times while on the field that I’ve made similar calls to referees - “steps!” - which probably isn’t altogether advisable, but it’s infuriating when whistlers allow three and four fellas to batter your ribcage and blow you for overcarrying when textbook and blatant offences such as seven or eight steps are condoned.

Asked @goughd4 about the two rules I think referees ignore and penalise me for.

Very sad to realise afterwards that I only want to know how to "get rid of it" legally ‍♂️pic.twitter.com/Wk226Vj9J0

It now seems acceptable for a player to cover ground into contact and subsequently escape a challenge while keeping underarm hold of possession - the step-taking can sometimes run to double figures.

Arguably the best referee in the country, Meath man David Gough, was speaking to Joe.ie recently about rules and one of his admissions knocked me bandy. His lax view on an age-old piece of legislation was startling and makes you wonder why the GAA keep coming up with directives when the ones that are currently in place are being ignored.

“It comes back to our perception of steps,” he said. “Referees do not count steps.”

Sorry, say that to me again. One of the core principles you learn upon taking up the game and yet officials are now dissing it? Bonkers. It’s like making the offside rule in soccer and rugby optional, or allowing snooker players to pot multiple colours without filling in the gaps with reds.

“It is too difficult in a game to watch all that’s going on and count steps,” Gough added.

“Inevitably, if we try to keep counting steps and the number of hops and looking at tackles, the mind just switches and we revert to counting our own steps that we’re actually running at the time.”

I’m not a referee and haven’t been in the pressure situations he has, but it seems unacceptable that one of our leading adjudicators sees it fitting to be selectionate regarding his use of a set of rules which have stood the test of time. How is it difficult to count to four?

He must be offered leeway as it could be challenging to get every decision right under the spotlight of Croke Park and where the margins are so fine, especially given he has the bookkeeping responsibilities of a private secretary on top of everything else. But to say steps are untraceable is ridiculous. The rule has to be enforced. If it were, Kerry could well be All-Ireland champions.

And what message does that feed down to the whistlers at domestic level? Do we now allow the talented U13 to run as though playing rugby, or the stout gasún to bulldoze his way to the scoring zone?