What's more, Barry Goodman did it in a plaster cast 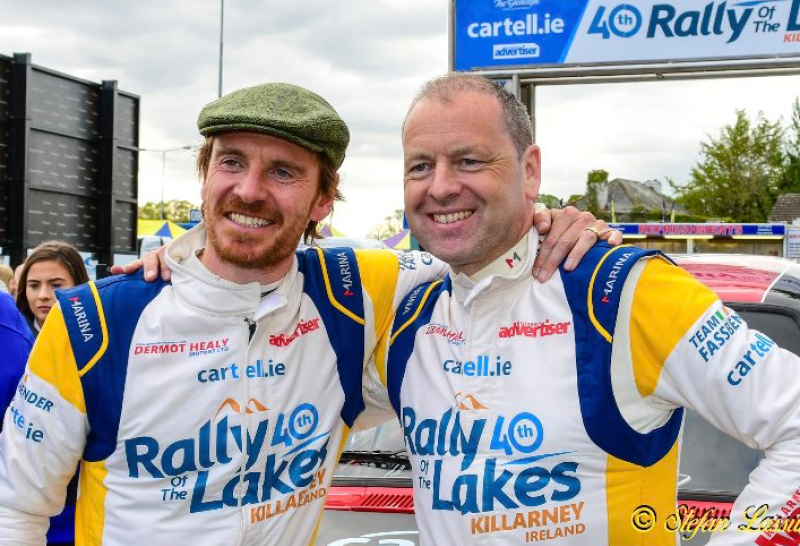 Blackrock native Barry Goodman spent two days in a car with Michael Fassbender and yet he did all the talking.

Blackrock native Barry Goodman spent two days in a car with a film star and yet he did all the talking.

Based in Kerry, the motorsport and Dundalk FC fanatic co-drove for X-Men bigwig and multiple-time Golden Globe nominee Michael Fassbender in last year’s Rally of the Lakes event in Killarney.

One of five races on the Irish Tarmac Championships calendar, a fairly prestigious national competition, Fassbender’s inclusion in the Kerry leg was organised to coincide with the event’s 40th anniversary celebration.

He needed a No2, though, and with Fassbender on terms with Dundalk racing legend Tommy Byrne, contact was made and an agreement reached.

“I was approached in March of last year to co-drive for Michael,” says Goodman, who features heavily in a three-part documentary series reflecting the Irish-German’s participation.

“I suppose they wanted someone with experience and a safe pair of hands to keep him on the straight and narrow; it’s a completely different discipline to circuit racing, which he’d have been used to.

“He’s a gentleman; a lovely man to deal with and we’ve become friends now. I speak to him every couple of weeks and we were supposed to meet-up four weeks ago when he was due home. You get notions that these stars are… but he’s just a normal guy.

“There’s a Dundalk/Blackrock connection in Tommy Byrne, who even made it over for the race; giving talks and selling his book. I grew up following Tommy and going to his races. When I was a kid and Tommy was home, I’d be shooting around town with him. He is actually Michael’s driver coach in the States so when the idea of me co-driving for Michael was raised, Tommy got on to him and copper-fastened it.”

Not that preparation was altogether flawless. Having been training together and compiling track notes, Goodman’s involvement was called into question less than a week-and-a-half before the race got underway. 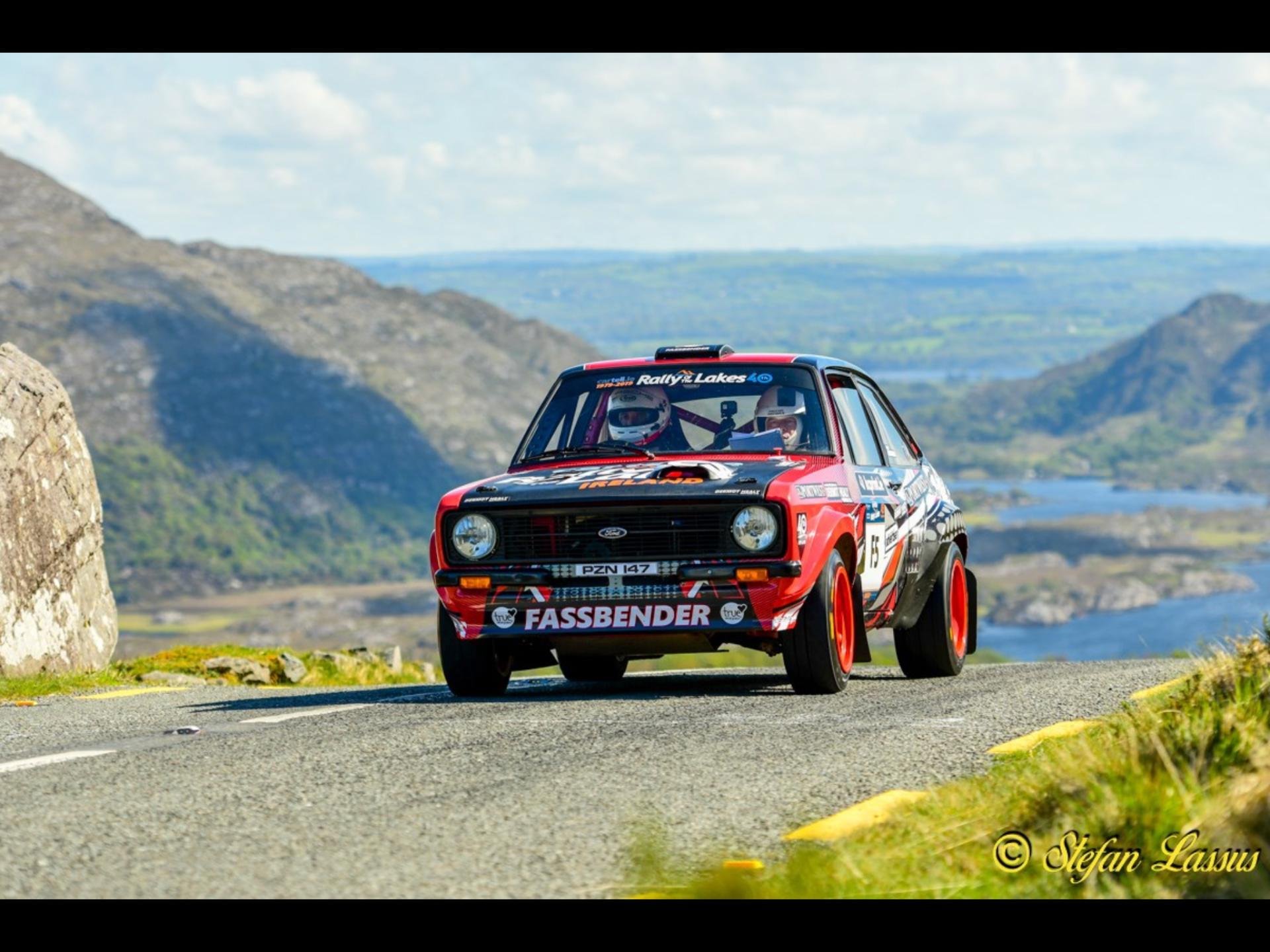 “We did a lot of work together for about three or four weeks and were feeling good, but nine days before the rally, playing on astroturf, I ruptured my patella, broke my leg. Sure I made an awful balls of myself!

“I’d to get an operation and do the event in a cast. A good friend of mine, he’s a surgeon in Cork and he fast-tracked the operation for me. But when I told him why I wanted him to fast track it, he wasn’t in agreement even though he races himself in Mondello. Not even he thought it was a good idea.

“I didn’t tell the surgeon and we went ahead and did it - it was a great success.”

An example of Goodman, a well-spoken and genuine fellow, stoking the idea that you have to be mad to get involved in motorsport!

THY KINGDOM COME
Goodman has lived in The Kingdom since 2008, during which time his rallying career, which once saw him complete two stages of the world championships, has gradually tapered off, family and working life gradually taking priority.

The sport has given him plenty, though. He met his wife, Aileen, a Cork woman, at an outing in the Netherlands and having married, they were house hunting in the north-east when his then-employer, Ulster Bank, offered him a regional management position in the Munster area.

It was perfect timing and 12 years on, Barry couldn’t be happier, living in the deep south with Aileen and their two boys, Noah and Zach.

His brother-in-law, Donie O’Sullivan, is a competent driver and the pair were a last corner crash away from winning the Rally of the Lakes title in 2008. It would have been a major triumph for them, Goodman having finished third with Kerry man Kevin Barrett in the Irish National Championships on a number of prior occasions.

Meanwhile, his brother, Paul, now living in Dunleer, is a two-time Irish title holder from 2007 and ’08. Their need for speed just developed at a young age.

“It’s in the blood to some degree,” says Barry, “I met my wife because of rallying.

“I love all sports. I was - and still am - a fanatical Dundalk supporter and I would have played tennis, golf in Blackrock and motorsport, but mainly football and motorsport as a kid. And Tommy Byrne, I was immersed in his career.

“Rallying was really the only way you could get into motorsport in Ireland, so I started rallying in ’88, doing navigation events. They’re not supposed to be speed events, more so your ability to read a map, but they’re a bit cowboy and sort of officially banned now! 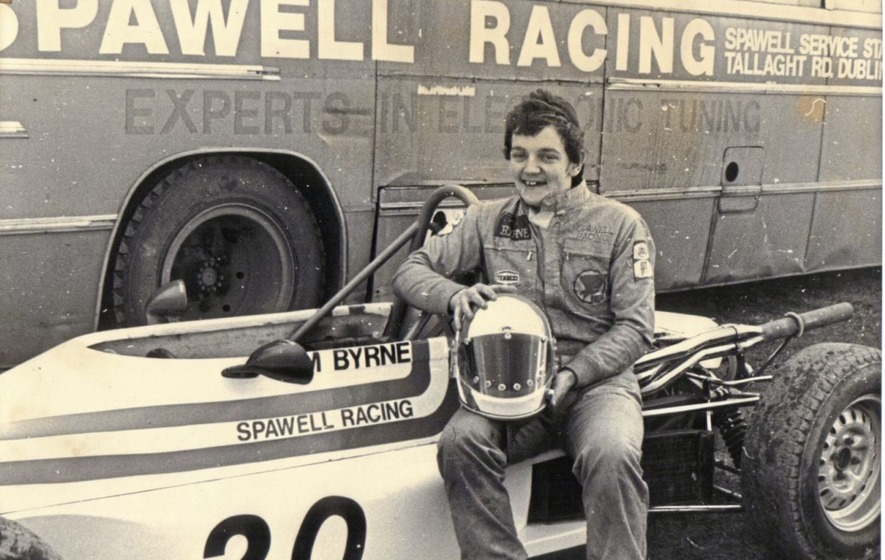 “The sport was actually really big in Dundalk, with Raymond Monaghan and so on, but it has died. It was huge when I was a kid and into my 20s.

“There was a very good event run out of Dundalk for years, out of The Fairways Hotel and up the Long Woman’s Grave. A lot of the world championship teams used to use that stage, up until about 10 years ago, for tarmac testing - I’d have used it a lot.”

Quite a bit of his top-level experience, though, would have been as a co-driver. Is he like a caddy in golf? “Sort of,” he adds, suggesting that his responsibility is more aligned with a project manager in that they’re tasked with working on everything logistics-wise, from travel arrangements to course notes.

“Success was limited enough over the years, but it was the enjoyment, camaraderie and sense of achievement that was huge.

“I used to get a fabulous buzz out of being a co-driver. Now, there would have been a couple of guys who I’d have co-drove for and I used to look at them at stages and think, ‘Jeez, I could go quicker myself!’

“But when you’re with a really quick guy there is a great buzz and it’s a really enjoyable experience. To be fair to Michael, by the second day of last year’s rally, he was giving me that buzz and we were really enjoying it.

“The craic in the car, you’re serious when you need to be, but you’re having a bit of fun. It’s an enjoyable sport and as a co-driver, if you’re good enough, it’s not very costly. As a driver, how do you get a small fortune rallying? You start with a big fortune. It’s a money-pit.

“Now I just don’t have the time to be doing it all year round because it takes up all your time. You could spend three nights in the lead-up to an event preparing all the schedules and documentation.”

LIFE IN THE FAST LANE
Goodman was speaking throughout the race, informing Fassbender of every gradient, corner and tricky terrain. It requires maximum concentration and a rigorous comprehension of the course. Crashes, after all, can have fatal consequences.

“There was a sense of nervousness before the event because, obviously, I wasn’t in a great position with the cast and on the first stage of the rally, I’ve had big accidents the last two times I’ve competed.

“His life is in your hands because he’s depending on you delivering the notes at the right time; to make sure that he doesn’t crash.”

The two-day rally involves 14 stages, split evenly across the weekend, and between two and three hour’s driving in total. Short and sharp, pace is the key. Yet, despite the exhilaration of the tempo involved, the rally had failed to capture the imagination of the local, spoiled sporting public until last year, Fassbender’s recruitment stirring Kerry interest.

Organisers wanted to give the community something back through exposure, which they managed, and the event was deemed to be a huge success, as the actor’s documentary portrays. Last week’s opener, as well as parts two (tonight: May 19) and three (May 26), can be viewed on www.vero.co.