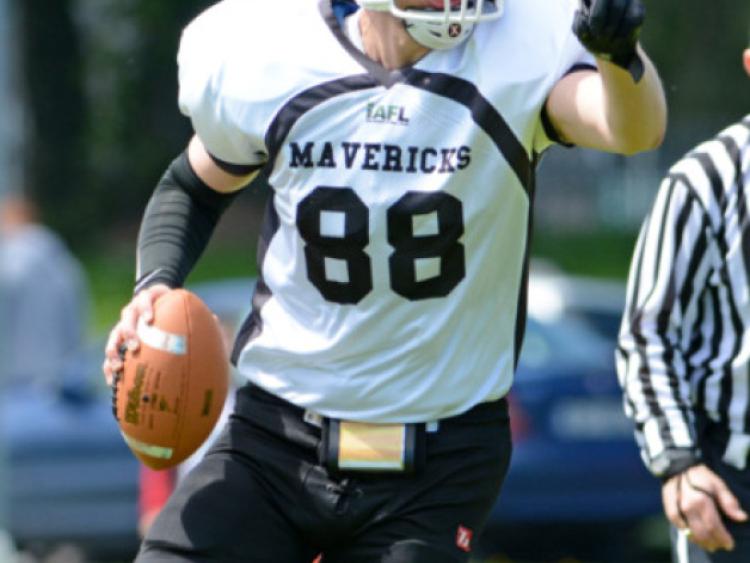 The Dundalk Mavericks returned to action at DkIT this past Sunday in their final home game of the season.

The Dundalk Mavericks returned to action at DkIT this past Sunday in their final home game of the season.

A week removed from suffering a heavy loss to the Tyrone Titans in Omagh, the Mavericks faced a strong South Kildare Soldiers team who they defeated 15-6 in the opening game of the season. Before kickoff the Mavericks suffered a huge blow, when powerhouse running back Kristapps Blums suffered a serious foot injury during the pregame warm-up.

Not daunted by this the Mavericks defence took to the field to start the game. Strong pressure from the defensive line and linebackers quickly put the ball back in the hands of the Mavericks offense. A new look offense saw Matty Hagan switch from wide receiver to under centre and started strong, making good yards. However, the Soldiers defence stood robust and possession was exchanged multiple times.

The second quarter continued in the same vein as the Mavericks made use of their running game to good effect. However, when they needed it most the Soldiers dug deep and halted the progress. Not to be outdone by their offensive teammates, the Mavericks defence, led by captain Jamie Lally, continued their relentless pressure on the South Kildare offence. Possession continued to be exchanged between both teams until half time with neither being able to capitalise.

Dundalk received the kickoff to start the second half and reverted back to the strong running game that worked so well in the first. The offensive line continued to hold strong giving the running backs ample opportunity to gain yards. As in the first half, this paid off as the Mavericks took the ball from deep in their own half with some brilliant runs by Rice and Caldwell. It was Rice this time that crossed the line to get his first touchdown of the season and the Mavericks second of the day. The extra point was missed but the Mavericks took a 13-0 lead going into the final quarter.

Both sides held firm and neither were able to cross the whitewash again. With less than two minutes left to play, the Mavericks offence added a field goal to give them a 16-0 lead. This proved to be the final score of the game and gave the Mavericks the win and their second consecutive shut-out at home.

Team captain Declan Mulvihill spoke at full time and mentioned the relief at bouncing back from the Tyrone defeat. He said that every player had improved and their eyes are now firmly on the upcoming away game in Galway.

Mavericks left tackle Aidan Maguire added: “The Soldiers gave us a hell of a game and we expected that. It’s great to see the sport growing in the town and seeing 80+ spectators on the sideline and local businesses like Kehoes get behind us.”

Their next game is against a resurgent Galway Warriors team in GMIT in three weeks. Providing they get a favourable result, the Mavericks will get the opportunity to avenge last week’s defeat against the Titans on August 17.