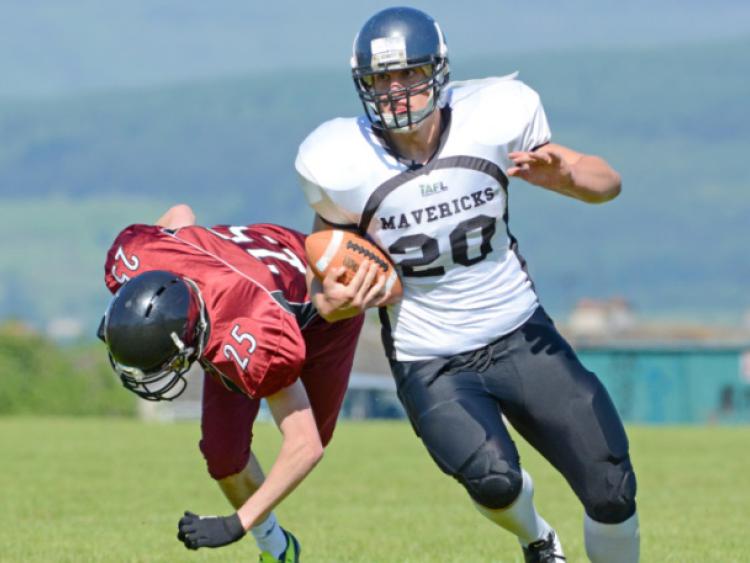 The Dundalk Mavericks looked to get back to winning ways on Sunday as they faced the Galway Warriors in the IAFL-2 at DKIT after a loss to Tyrone Titants last time and did so with a convincing victory over Galway Warriors.

The Dundalk Mavericks looked to get back to winning ways on Sunday as they faced the Galway Warriors in the IAFL-2 at DKIT after a loss to Tyrone Titants last time and did so with a convincing victory over Galway Warriors.

The Mavericks started strong with the running back tandem of Robert Shevlin and Kristaps Blums punching through the Warriors line and making good yards. Their hard work did not add up to points however and the teams continued to exchange possession throughout the first and early second quarter.

The deadlock was broken with four minutes remaining in the half when quarterback Declan Mulvihill picked out Matty Hagan who ran the ball in for his second touchdown of the season. Hagan followed this up with a two point conversion to put the Mavericks up 8-0 at the half.

The second half saw a change in the momentum of the game. The searing heat took its toll as bodies started to get tired. The Mavericks made use of their sizeable squad depth and rotated players in and out of the game.

The Warriors, who travelled east with a much smaller squad, were not as lucky and injuries forced much of them to play on both sides of the ball.

Within minutes of the start of the second half, the Mavericks extended their lead. Cornerback Aidan O’Donohue picked off a pass from the Galway quarterback and ran it back for a touchdown. Matty Hagan slotted over the extra point kick to give Dundalk a 15-0 lead going into the final quarter.

The score of the game came early in the fourth when nose-tackle Shane McNulty returned another Galway interception for a touchdown. The Warriors had been putting the Mavericks under pressure and manufactured a drive that brought them to the seven yard line.

A high snap from the centre put the Warriors quarterback under pressure and a brilliant tackle by Luke Goss popped the ball up into the arms of McNulty who ran the length of the pitch for the score.

There was still time for another touchdown as the Mavericks built a drive of their own in the dying minutes. Running back Shevlin capped a fine performance with a score of his own punching the ball in from five yards out to make it Dundalk 27 Galway 0.

The win improves the Mavericks record to 2-1 and puts them back in contention for the IAFL2 title with a crucial return tie against the Tyrone Titans in Omagh on July 13th.

The Mavericks’ recent club sponsorship deal with Kehoes Bar of Quay Street and the turnout of over 100 spectators in DKIT on Sunday shows that American Football is a sport really in the ascendency in Dundalk. The Mavericks are keen to grow their squad further and welcome new players to come down to training in DKIT on Saturdays at 11am.