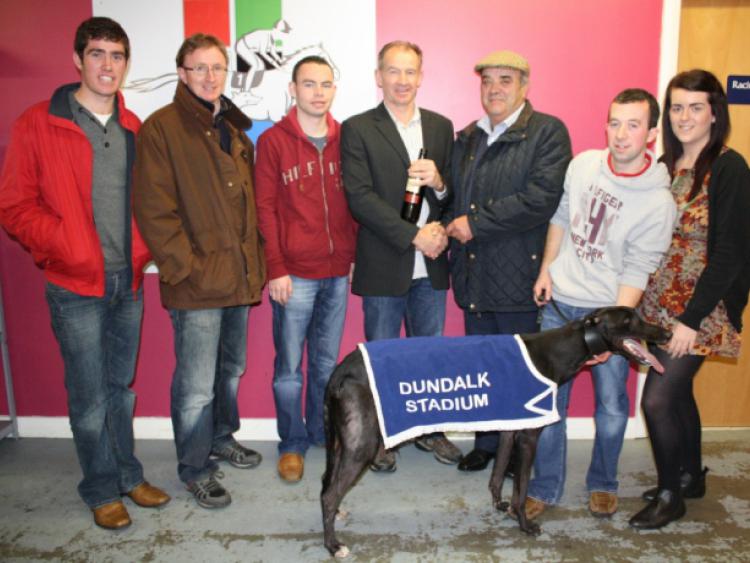 The younger brigade had a hero in Corduff Flame on Friday night’s eight-race card at Dundalk Stadium, while Eoins Daisy offered it up for the long-servers. Both are kennelled in Monaghan.

The younger brigade had a hero in Corduff Flame on Friday night’s eight-race card at Dundalk Stadium, while Eoins Daisy offered it up for the long-servers. Both are kennelled in Monaghan.

Central to the programme were the three An Cup Veterinary first round heats, and the outstanding performer here was one of the youngest in the line-up, Corduff Flame, owned in partnership by the competition sponsor, Brian Jones, and his brother, Laurence.

By the time this home-bred strutted his stuff, Eoins Daisy, the oldest on the card, was tucked up in his kennel having scored on his 111th appearance. This remarkable performer has been featured before, and there could be even more to say about him in the weeks ahead.

Also on the card, Farloe Hodge showed lots of promise in the opening sprint, while Shane Grimes, due to play with Drogheda United in the FAI Cup Final, took time off from training at Hunky Dorys Park to cheer home Windgap Jewel, a bitch he owns in partnership with another Dundalk lad, Peter McArdle.

When it seemed his career might be over when he trailed in last, beaten a total of 12 lengths in late August, Eoins Billy stepped on to the track as lively as ever, and if he was good in the parade, he was even better in the race.

The April ‘08, a credit to his Castleblayney owner/breeder, Gerry Irwin, led them all out, and before reaching the first bend was beginning to assert. He had a three-length lead in the back, and though Memories Dash trimmed it back a bit, Eoins Billy was still comfortably ahead at the line, recording a time, 29.02, which was just a little over two lengths away from his best for the distance.

The Razldazl Billy dog has now won 26 races, and along with that has 43 placed efforts to his credit.

The opening heat of the An Cu Veterinary was won in splendid fashion by Kevins Katie, the property of the youthful Kevin Keenan, from Ballycastle.

Always in control, the Kinloch Brae bitch built a big lead early on, and never looked to be in danger of losing it. Vivian Sands’ Blackrock runner, Sandygrove Holly, was never out of second place, and having her first race over the distance, stayed on well to finish just over four lengths off the 30.77 winner.

Each of the four runners in the second heat heat was guaranteed a semi-final slot, and it was Jemmy Boy who advanced with most credit.

The chances of the competition’s money - €1,250 first prize – being kept at home, as it were, are far from remote.

In landing this heat, the sponsor’s Corduff Flame was hugely impressive. The home-bred went from one and finding a way through the tightest of spaces, grabbed the initiative before turning into the back.

Chased by Grenanstown Mac throughout, Corduff recorded 30.28, a really fine effort on only his second career start. The Damien Maginn-trained Grenanstown Mac, making his debut, ran well in defeat, while Rosmon Rock’s estimated time when finishing third was better than two other heat winners. Kyllians Lady was the other semi-final qualifier.

Windgap Jewel’s win in a graded race was her third on-the-trot, the former Kilkenny tracker following up a Harold’s Cross 525 win and a 350 at Dowdallshill.

She was lightning from traps, and having led throughout, finished just over a couple of lengths clear of Rahillion Bolt in 19.02.