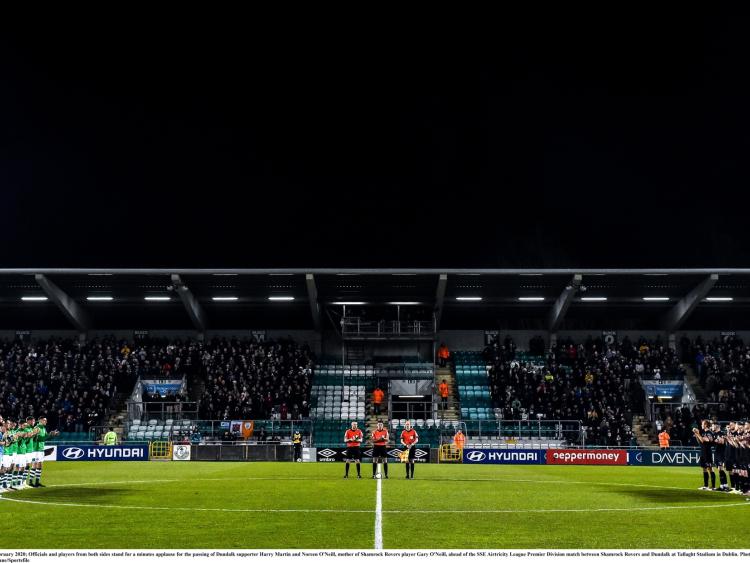 Tallaght Stadium is one of the few fit-for-purpose and spectator-friendly venues in the SSE Airtricty League. (Pic: Sportsfile)

The Irish Independent’s soccer correspondent, Daniel McDonnell, put it succinctly last week when he wrote that Covid-19 and its pandemic may succeed where the League of Ireland’s clearly flawed licensing regulations fail.

He was, like the rest of us at the time, stomaching the statement released by the FAI and members of the league’s management committee which offered five potential ways in which to get the present campaign completed.

Some of the documented options indicate the possibility of playing matches behind closed doors either altogether or for a timeframe dependent on HSE and government advice. There is scope, it appears, for fixtures to also go ahead in front of crowds of greatly reduced capacities. In any case, the financial impact on clubs could be fatal.

Though the most pressing matter wasn’t explicitly alluded to, reading between the lines, it’s fairly evident that outfits appreciate the need for proper and suitable cleansing and toilet facilities within grounds if and when the season resumes.

Democrat columnist Gerry Malone has been beating this drum for weeks - and rightly so - but the calamity of the situation is that it has taken a gravely-threatening virus outbreak to waken clubs across the country to the inevitability that many grounds are a breeding abode for disease and its transmission.

In so many venues the lack of hygienic awareness is shocking as the vulgar toilet and hand-washing offerings exhibit. No longer can portaloos with a lack of running water and/or soap be condoned by either the clubs themselves, the league chiefs or the FAI. Some stadiums’ basic facilities haven’t been improved since they were first installed.

Granted finance is supremely limited across the divisions and potential revenue figures aren’t exactly conducive to drastic domestic overhauls, but the predicament now ultimately dictates that no stakeholder can responsibly allow supporters to attend games where they are deprived of rudimentary and essential amenities of the adequate kind.

Louth GAA’s Gaelic Grounds home is the country’s sole nominated inter-county stadium where spectators have to make use of toilets which could otherwise be described as unfit for animals. Portaloos at the back of the main stand and limited provisions for female attendees.

And yet aside from rare exceptions, such utilities are widespread in a league which has thrown its lot at striking marketing and promotional campaigns while steadily sustaining itself financially. Holding on to supporters is as much dependent on them having a comfortable experience as it is providing an aesthetically pleasing offering on the pitch.

Covid-19 has had a devastating effect on this country in terms of industry and our social construct. But if there is to be a silver lining drawn, let’s hope it is in regard to how sports clubs and bodies treat those sampling their fare. It’s not only people’s money that should be of interest, health ought to be the new wealth and clubs must help in the accumulation process.

Otherwise, behind closed doors games is the only viable option, a measure which would almost certainly kill clubs altogether.