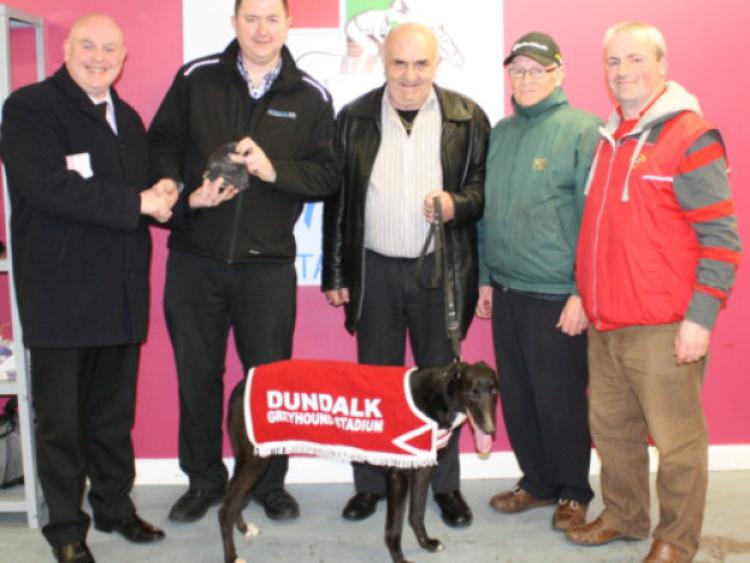 Fears that a trap six draw would be detrimental to Drumsna Messi’s chances in the final of last Saturday night’s Avenue Inn 525 (previously named the Land of Legends 525) at Dundalk Stadium were dispelled in spectacular fashion.

Fears that a trap six draw would be detrimental to Drumsna Messi’s chances in the final of last Saturday night’s Avenue Inn 525 (previously named the Land of Legends 525) at Dundalk Stadium were dispelled in spectacular fashion.

By the time the Co Meath dog turned for the back straight he was in front. While the others were denied a clear run at the opening bend, especially the top two in the betting, Bit Of Action and Manilla Lemon, Drumsna Messi had all the room he required, and he exploited it to the full.

Showing in front of Parnell Jack, the son of Crash and Hather Rose put the race to rest in the back straight, opening up in a fashion that was a reminder of his quarter-final win.

The contest among the others was for the minor placings, and in this the Rockmarshal challenger, Dryland Shadow, fared best, coming late to deny Stephen Thornton’s Bit Of Action the runner-up spot. Parnell Jack was prominent in the tussle for minor honours, but neither Manilla Lemon nor rank outsider, Screen Queen, recovered after the first bend crowding.

Almost five lengths separated the first two home, and the race was won in a competition-fastest 28.78, adding lustre to the now six from 10 winner’s performance. Bit of Action was a head off Dryland Shadow.

Previously owned by the formerly Kilkerley-based Pat and Pauline Quinn, Drumsna Messi runs for the Trim partnership of Ray Butler, a Fine Gael TD, and Larry Costelloe, and is trained by Martin Lanney, whose records show that this was his 50th competition win, the Bar-One Irish Sprint Cup figuring among the others.

“I was stuck on 49 for an awful long time, and I thought I’d never get off it. But Drumsna was in the form of his life, and I thought if he got a clear run he’d win,” said the Rathkenny trainer, who worked himself on to the Classic-winning podium when Johnny Gatillo triumphed six years ago.

There was another win for Colm Farrelly’s Hackballscross kennel later on in the card, Pats Kingdom leading from start to finish in a 525 – and Peter Noone’s Lordship kennel also had a winner, Valeries Angel holding out to win by just under two lengths from Oisins Rocket in 29.32.

Brian and Laurence Jones won with debutant, Hip Hop Harry, the home-bred taking full advantage of an inside draw in a 400.

The meeting was a benefit for Dundalk Football Club, and anyone following trap four couldn’t fail to win money, as may as seven of the winners wearing the black jacket.

Friday night’s card, the first to be run unaccompanied by a race meeting this year, witnessed a win for Quay Celt, running for the Kerr brothers, Paddy and Philip. Scoring for the fourth time in his 33-race career, the black recorded his best time for the standard distance, 29.33.