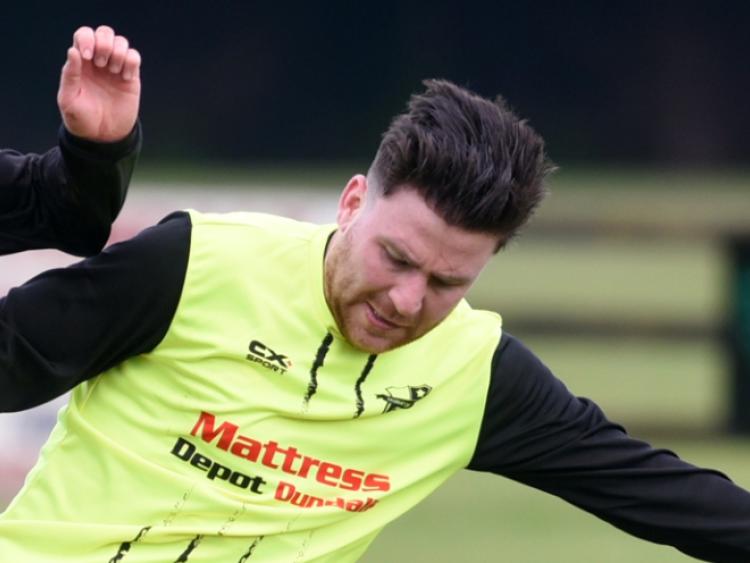 Dundalk FC fan Adrian Rafferty: 'We’re blessed at the moment with the number of visits we get to the Aviva'. (Pic: Ciarán Culligan)

HOW LONG ARE YOU A FAN?
I started to follow Dundalk when I was 12; I was at three or four games the year they won the FAI Cup (2002) because my mother wouldn’t let me go unless someone took me and my brothers, Big Colin and Wee Ronan, wouldn’t take me. The year after I was allowed to go up with the boys!

FIRST MEMORY OF ORIEL PARK
The semi-final against Shamrock Rovers in 2002. I don’t remember anything from the game, just going mad when the goals went in!

STAND OR SHED?
Shed! Well, the side of the shed with my brothers and their mates. It’s a great spot for getting into pictures. Could be a bad time if you’re stuck talking to the wrong person, but I usually get in beside Patsy Mathews which is good!

CUP OR LEAGUE?
We’re blessed at the moment with the number of visits we get to the Aviva and I think we’ll only realise how special it is being there the first year we don’t make it, but the league is your bread and butter; the best team always wins the league! League.

FAVOURITE PRESENT PLAYER?
Has to be Chris ‘Tall Scholes’ Shields, like so many other people, I’d imagine. Watching him grow with us over the years to be one of the best all-round midfielders was a pleasure. Driving up the left-wing in Alkmaar to win the free-kick for the Kilduff equaliser is a personal highlight of mine!

ALL-TIME FAVOURITE?
Probably has to be Shields again. He’s a great man and I wish he was my Dad! Special mentions to other favourites over the years: John Flanagan, Robbie Dunne, Trevor Vaughan and Richie Towell.

BIGGEST RIVALRY?
Would have to be Shamrock Rovers. All the battles on and off the field over the years makes it special every time we play them. We still owe them one for what they did to poor Danny Watters before the Setanta Cup final!

I’VE A SOFT SPOT FOR?
Derry City. All the great players that have played for both us and them over the years, the likes of Duffy, McEleney, Higgins, Griffin and Rafter. Also the fondness for Ryan McBride after his passing. What a player!

GAME OF THE KENNY ERA?
It kills me to say it but I missed the BATE game in Tallaght due to personal reasons and as much as I’d like to say it, I can’t, so the game in Alkmaar would have to be my favourite. Everyone still in the ground an hour after the final whistle singing songs and the players out on the pitch with us was special!

2019 IN A SENTENCE
The yellow card that cost us the Cup!

I can’t imagine any modern fans’ team being much different to that, we are blessed as Dundalk fans.

WILL WE GET ANY MORE FOOTBALL THIS YEAR?
Hard to call unless they come up with a cure for the Covid-19. I would say no, people’s health is more important than football. Call everything off!