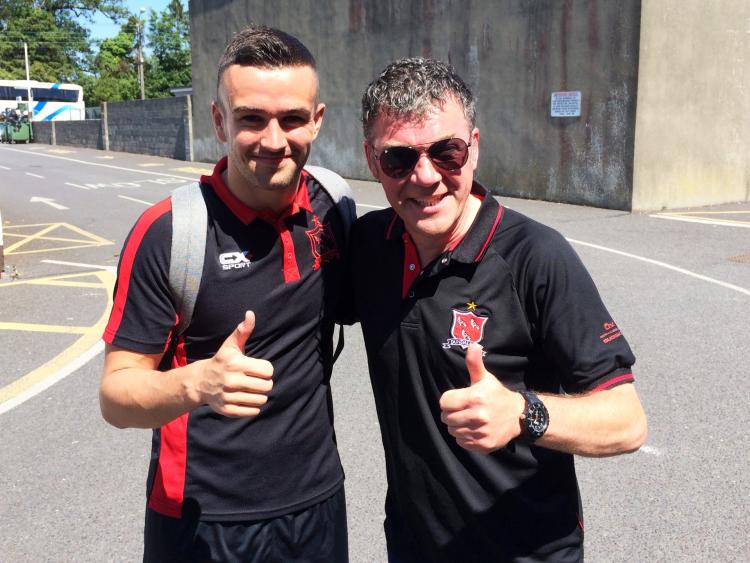 “I said to him, ‘you’ll have to sign him’,” Duffy says, the audacity of telling the King what to do being enough to knock one bandy.

Kenny had his answer, though.

“‘One Michael Duffy is enough at Oriel,’ he said.

“But, sure enough, when he came back from Scotland, Stephen was the first man to grab his signature, and he’s been amazing… It would have been dreadful had he been a poor player. I don’t think I could have handled it!”

Hesitantly, due to there being so many over his near-50-year fanfare, Duffy ranks Duffy’s goal - Dundalk’s third - in last year’s title-sealing victory over Shamrock Rovers as the best he’s seen on the Carrick Road. There was an added significance to the strike because of whose boot it was shot from. 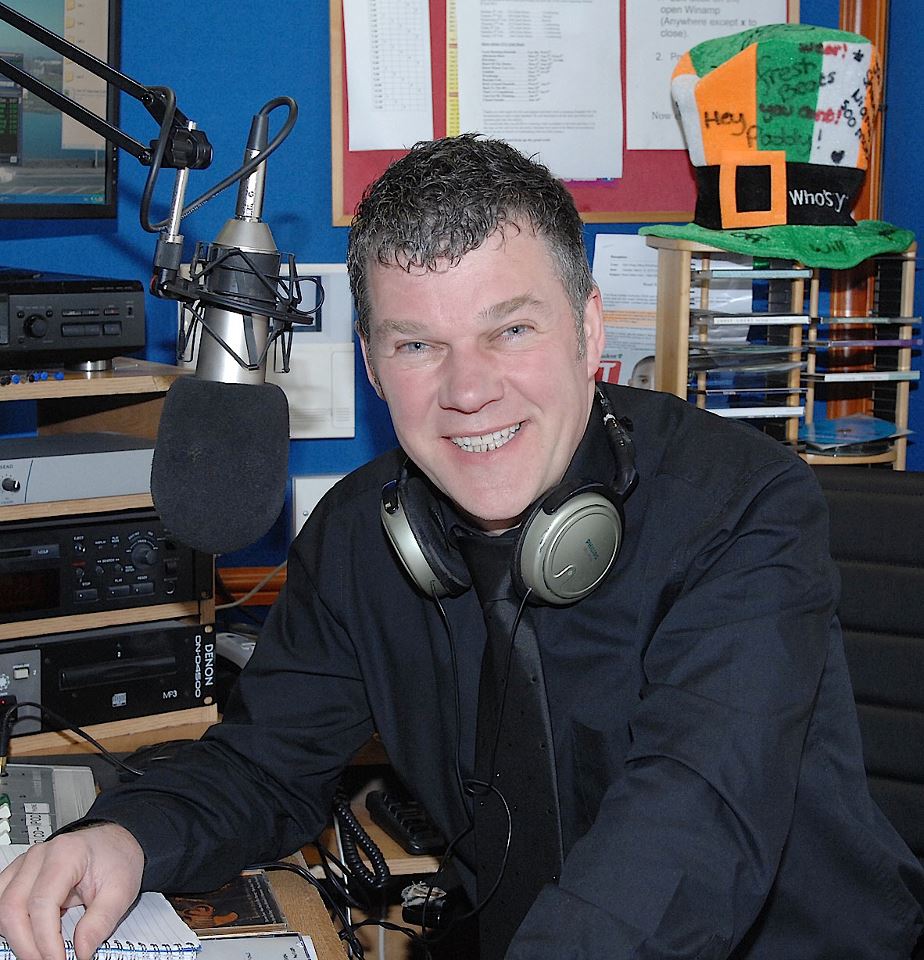 “That was it; that was the league,” he adds, “and for it to be scored by my namesake, it was extra special.

“It’s always special when I call his name out. It’s bizarre, I get this little goosebump feeling at the back of my neck. It’s like calling myself out. Like any Dundalk supporter, as a child, you dream of being the hero, so he’s living my dream for me.”

A young lad from Ravensdale, his love-affair with The Lilywhites began in the early 1970s when a neighbour, the late Seán O’Hanlon, used to pack Michael and his own children into the car pointed for Oriel and make the journey in the road for a Sunday afternoon kick-off.

“Forget about religion, Sunday was all about football,” he quips. “And it was like a pilgrimage to Oriel Park before kick-off. It was a real highlight of the week.

“My first Oriel hero was Jimmy Dainty. He was a dynamic player and I always loved the lads who could fly down a wing and cross a ball; Jimmy was exemplary at that and he had such amazing speed at the start of his career at the club; he was brilliant.”

Like your first experience of anything, the maiden title triumph of the legendary PA’s association, 1976, sticks out in his mind. The entire period under McLaughlin was magical, producing the type of success only matched by Stephen Kenny in more recent times. They’re the absolute best durations of the club’s existence, their style outweighing all others.

“Turlough O’Connor came and he had success, but he had a George Graham philosophy: win 1-0 and we’d be happy. They were happy days, though.” 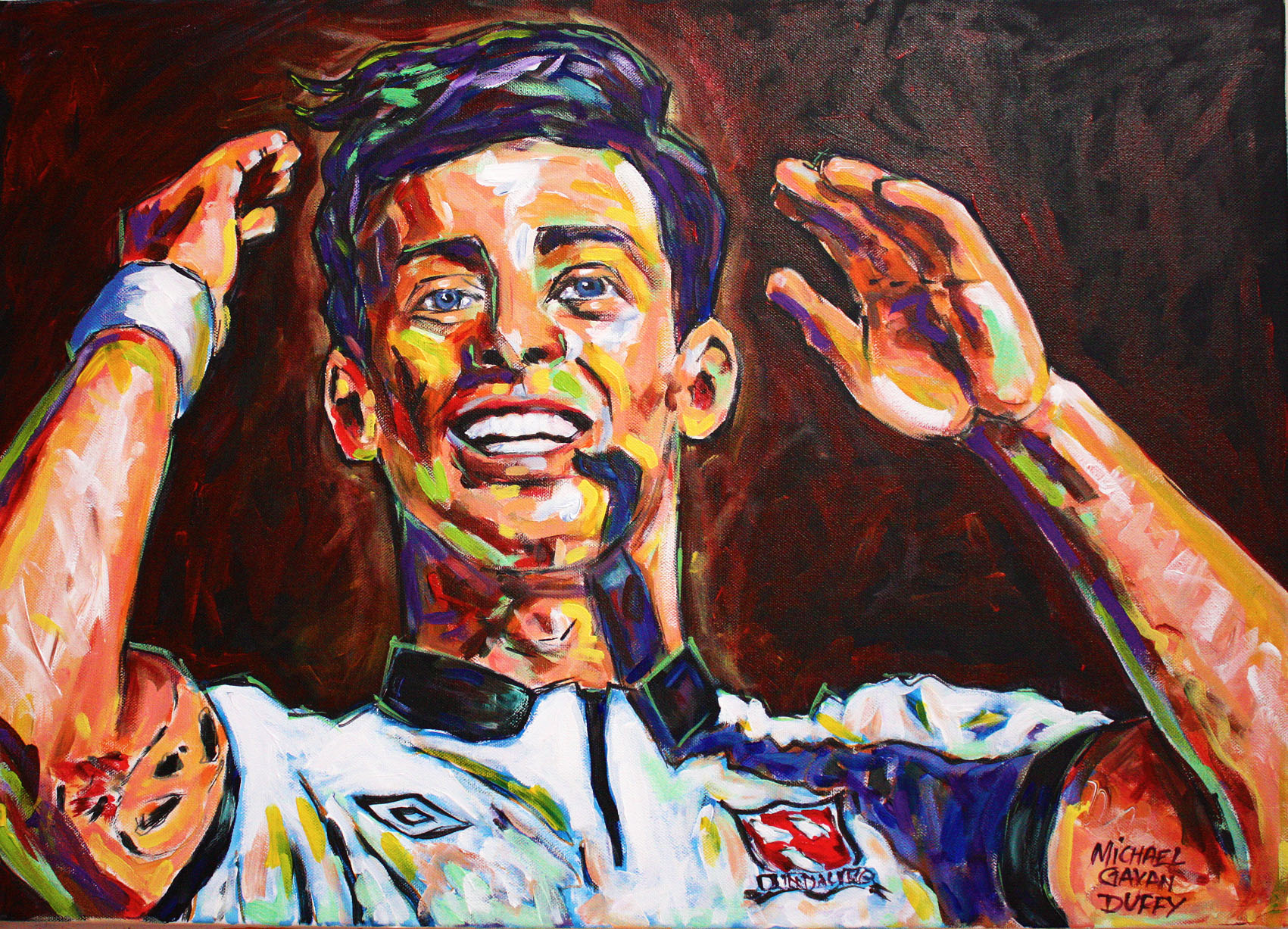 Then, amid all the gloom, there was 2002. Duffy was club PRO by that time, serving on the board of directors during the co-op’s days in charge, when David Crawley lifted the FAI Cup.

His role, like the other Oriel chiefs - including the now deceased pair who sought his involvement originally, Des Denning and John Savage - entailed marching cap-in-hand to local businesses seeking sponsorship. Wallowing in the First Division, with declining attendance figures, begs the obvious question. What do you say?

“I’d just explain to them about the great opportunity they were missing out on with a club with a great history and great future… despite the fact that we were in Division One,” he adds, laughing. “My motto back then was ‘the only way is up’. It took us seven years to get up, but it was inevitable.”

His promotional ventures included painting A3-sized posters and strategically placing them around the town, as well as designing cartoons for the programmes, prior to the late Jim Murphy telling him that he was “desecrating” the matchday offering via his sketches. End of.

COLOURFUL CHARACTER
Democrat: “If you were to describe your art through a Dundalk player, who would it be?”

Michael: “Oh, that’s a good question… Past or present?” 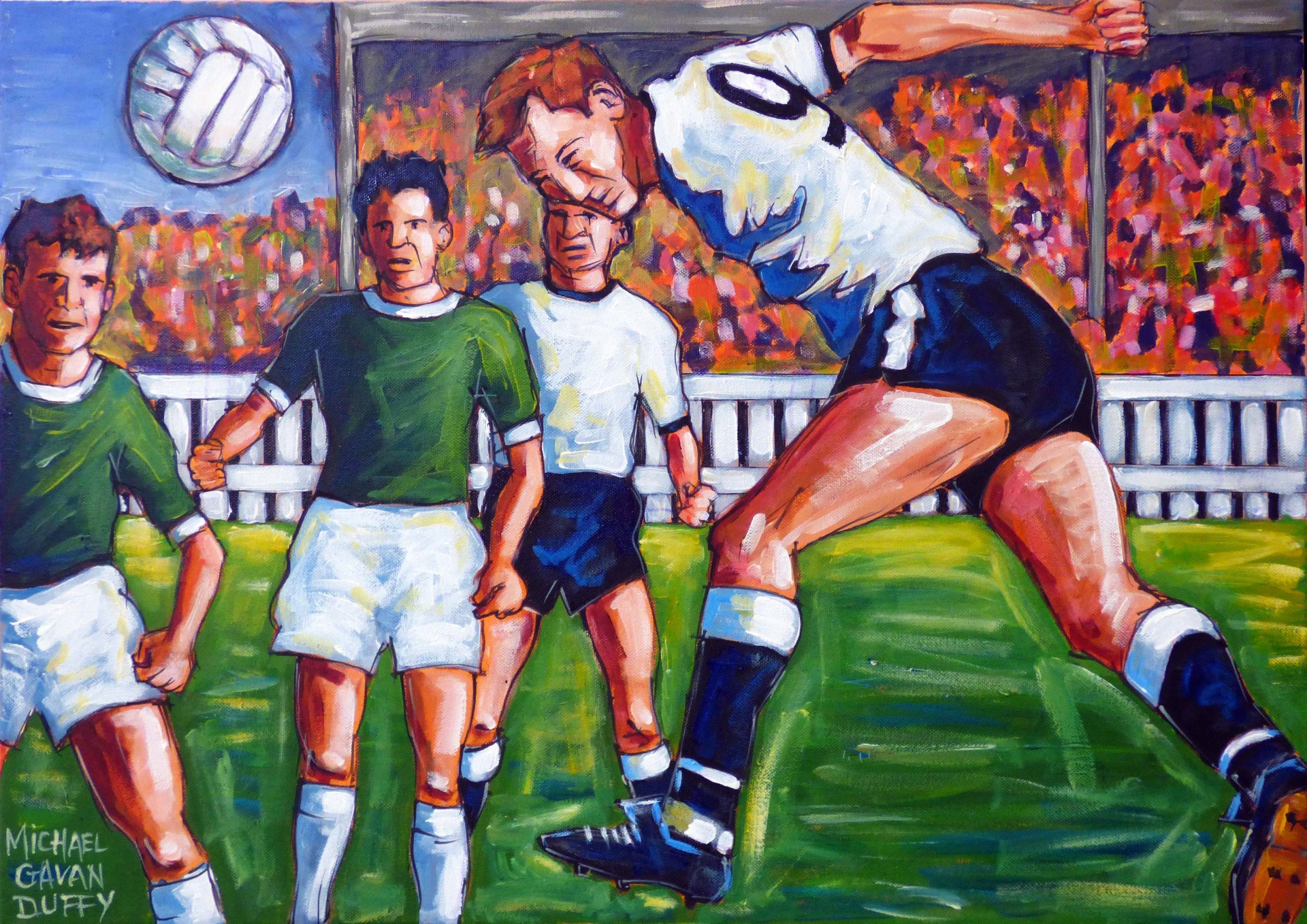 Democrat: “There’s been a few.”

Michael: “You’ve caught me on that one.”

Duffy is an outstanding artist and since his retirement from the council 10 years ago, on foot of his ongoing heart trouble, a passion has become a career; its therapeutic nature aiding his health and offering him a fulfilling outlet.

It’s also afforded him a way in which to give something back, his paintings often reaping significant sums of money at auction for various charities. The thousands he’s managed to raise are a source of pride and comfort.

For obvious reasons, “I’m not doing any marathons or triathlons,” he utters, jokingly, but the art perhaps fills a void left by not playing football any more. He recalls being handy for Melchester Rovers in the Winter League, gaining comparisons to a certain England legend. Though not for the reason he’d maybe like!

Michael: “I was ‘the snibber’, I played off the centre-forward. I’d a great goal ratio; I’d a great eye for goal.”

Democrat: “In the Patrick McEleney mould?”

Michael: “No, I wouldn’t be in his league at all. I used to have long, curly hair so people would call me Kevin Keegan. I was the Kevin Keegan of local football!” 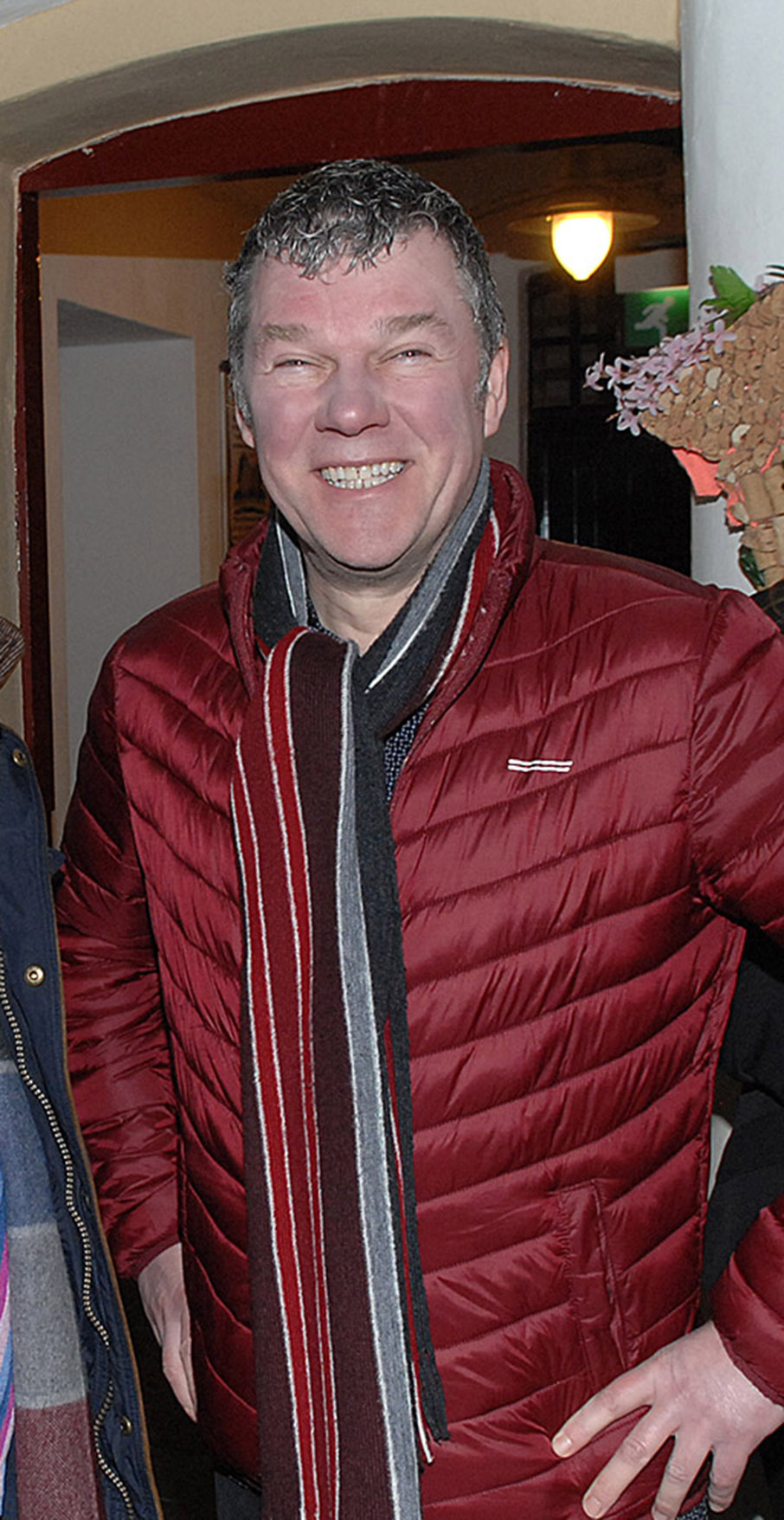 TWENTY-20
He has been the man behind the mic at Oriel for 20 years now, a role in which he’s most settled.

John McGarrity, the announcer in his childhood days, provided a form of comfort to Duffy when doing the job, so the present-day host hopes he offers the same to others.

And he’s successful in this sense, his inimitable style coming across effectively. Most of the time, anyway.

“There’s a guy in the FAI, Pat Duffy, a Monaghan man, who famously tells a story of being in Oriel Park one night when I was announcing the upcoming games. I said the next home game was against Monaghan and ‘that’s a banker, for sure’. Back then I used to throw in these quips.

“He came down to me laughing afterwards. ‘You’re very confident’. I was like, ‘yeah, no sweat’. Anyhow, Monaghan came and beat us 1-0. Pat forever reminds me of that remark and tells people in front of me. ‘Wait ’til I tell you about this fella…’”

“We were playing Shamrock Rovers one night at Oriel and they beat us 2-1. The winning goal was a flukey effort and, as you know the intense rivalry which exists, I said ‘the scorer of that very fortuitous goal…’ I was fined €100 by the FAI!”

“Shelbourne were playing in Oriel and Dermot Keely was managing them. The referee booked James Keddy very early on for a tackle and about 10 minutes later the ref gave him another yellow, not realising that he had already booked him and that he should have been off.

“Of course, me being the overenthusiastic PA announcer, I announced ‘second yellow for James Keddy!’

“The referee realised he should have sent him off, went straight over and gave him a red card. Well Dermot Keely went ballistic! He tackled me afterwards, ‘you, ya big mouth’. I said I was only doing the referee a favour, ‘I didn’t want to get him into trouble’.

“It actually happened years later again when Andy Boyle got two yellows in a game against UCD, but there was no way I was going to announce that one and risk the wrath of Stephen Kenny!”

And, at the risk of sounding like a Countdown contestant, another.

“One time I was over on the Shedside of the pitch, the time they’d the wire up. We were playing Cork and Roddy Collins was up front for Dundalk. He was just going through the motions, not putting the effort in, so, of course, being quite vociferous, when he was within earshot I said, ‘c’mon, Collins, will you put a bit of effort in today’.

“He took offence to it, came running over, off the pitch, jumped on the wire, stuck his finger right into my face and said: ‘F-off, ya dope!’, jumped off the wire and back on to the pitch.

“Everyone around me was in hysterics… It was like an Eric Cantona moment. He lost it… the truth hurts. One of the most bizarre and funniest moments.”

“There was the time in 1987 in Amsterdam when I came across the Dundalk players in the red-light district. Maybe I shouldn’t go there…”

ECLECTIC
Democrat: “Your choice of music. How would you describe it?”

Democrat: “The idea of Status Quo at full-time, ‘Rockin all over the World’, it’s fairly synonymous.”

Michael: “It’s a feel-good song and when you play it, it ramps up the tempo and it’s one that people can sing along to, punch the air to. There aren’t too many songs which can engender that sort of vibe when you win a game.”

UNIQUE
Democrat: “You sat beside Gerry Malone for a long number of years.”

Michael: “I miss Gerry. He’s a unique individual and I would have sat beside him for all of 17 or 18 years. Let’s just say it was an experience I’ll never forget.”