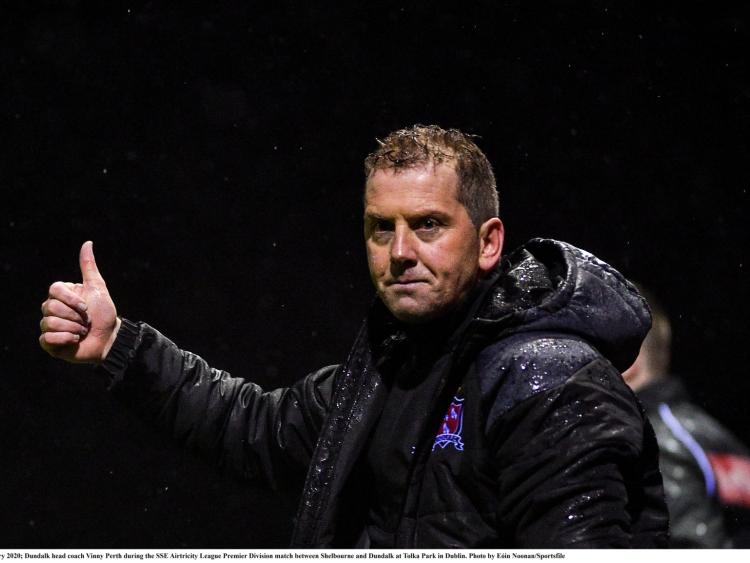 Dundalk FC manager Vinny Perth has issued a considerate statement to the club’s supporters ahead of what looks set to be a lengthy interval with no SSE Airtricity League action.

Dundalk FC manager Vinny Perth has issued a considerate statement to the club’s supporters ahead of what looks set to be a lengthy interval with no SSE Airtricity League action.

The Lilywhites supremo has encouraged supporters to “stay safe” at a time when Covid-19 is actively affecting all parts of the globe, while he says none of his players have, at this time, contracted the virus.

Perth has also called the country’s medical professionals “the real heroes now” and is hopeful that they will receive the credit and backing they require.

“From a footballing perspective, it’s hugely disappointing that after so much hard work in pre-season, one of the best we’ve had in recent years, we’ve had to curtail things and slow it down,” Perth wrote.

“The squad was really starting to come together and we had players on their way back from injury so we felt we were in a really good position but, ultimately, football and sport takes a back seat now. That’s unfortunate because sport gives so much enjoyment to people and, at this time, people could do with that in their lives.

“At Dundalk, our players have become heroes over the past seven years and the likes of Hoban, Gartland, Massey, Duffy and McEleney will be again but, to steal a line from our Taoiseach’s speech on Tuesday night, the real heroes now are the healthcare workers on the front line. We must show them the respect they deserve.

“Thankfully, everyone at the club is fit and well and we have had no issues but we have to help society and do our best to ensure that we don’t spread the virus.

“Because of how they train and live their lives, footballers are generally some of the healthiest people in the whole country but like everyone, they have families, parents and kids and we will adhere to, and respect, the guidelines that have been issued by the HSE.

“In terms of the wider community, it’s important that people look after not only their physical but also their mental health at this time. The one thing I have found inspiring is the number of people out walking and keeping active.

“Please protect yourself and your loved ones because at the end of this we want you all back at Oriel Park, safe and sound, cheering the team on.