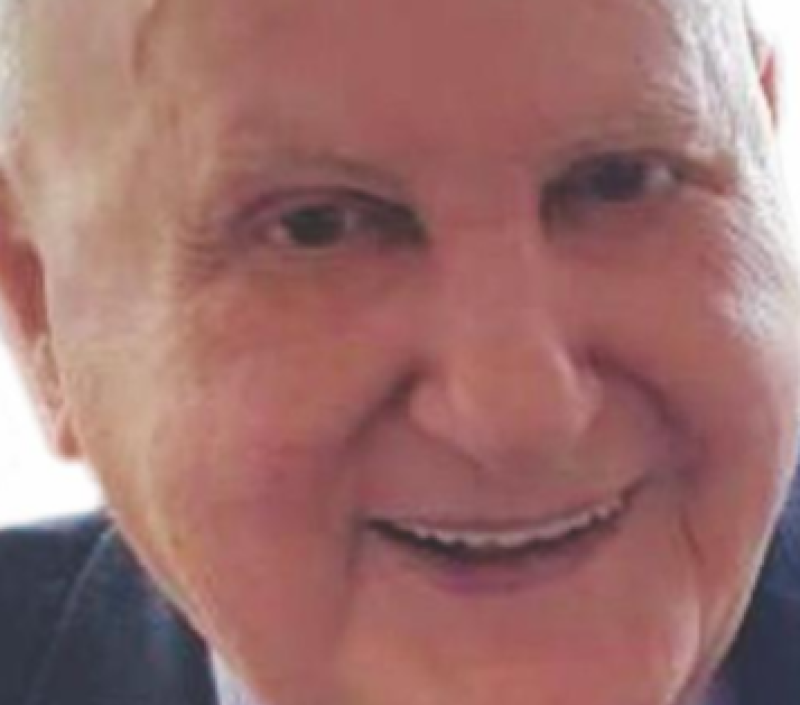 The best tribute I can pay to Frankie is to say he was a lovely, lovely man.

It was 1962 when I first entered The Dundalk Democrat’s hallowed halls in Earl Street to begin serving my apprenticeship. There was the gallery, where the commercial printing was done. Owenie Conroy, Johnny McEvoy, Gene Conroy, Paul Myers and Gerry McShane did their bit here. The lino room, known as such because it housed the linotype machines, was the domain of Frankie Boland, Vincie Tuite, Frank Eaton, Owenie Myers and my father, Pete, who made up the ads.

Johnny Smyth had the stone room all to himself, except on Thursdays and Fridays when the pages were being locked up – in other words, being finalised for printing. Tommy Gosling manned the machine room, where the paper was printed.
I became a floater like my fellow apprentice, Pat Eaton. We were floaters, because we had to be here, there and everywhere, and that included running to the bookies.

Up in the office were Frank Necy, the Editor, the father and son owners of the ’paper, Peadar and Tom Roe, and reporters, brothers Peter and Paul Kavanagh, and Owen McGahon. Eithne McGahon, Owen’s sister, was secretary and Eileen McGuinness was receptionist. Paddy King was another reporter, operating from his home in Dunleer.

Of the 23 listed, just five are still in the land of the living, which shouldn’t be a surprise since we’re talking about 58 years ago, the Class of ’62 having had quite a few veterans included. Frankie Boland wasn’t among the long-servers, but neither was he eligible for underage football. He died last week at the magnificent age of 97.

You were attracted to Frankie straight away. He made you feel at home and was generous with his conversation and instruction in the rudiments of the printing game. He also liked the horses and in that we had a common bond.

Yes, I had been dodging in and out of bookies’ offices hoping not to be spotted by the guards even before signing up at 3, Earl Street as a 16-year-old. As I said earlier, part of your apprenticeship involved running across the road to Hubert Shields’ with bets, by now not trying to avoid the guards’ gaze but Tom Roe’s.

I can say with certainty there were more losing days than winning ones. I remember on one particularly bad day, when, after the proverbial ‘one from England’ went down, we all stood around with long faces and empty pockets. This is a mugs’ game, we’d conclude. But Johnny McEvoy wouldn’t countenance any thoughts we might have had of packing it in. “If gambling and losing interferes with the work, give up the work.”

We continued to work, of course, turning out an old-fashioned but solid ’paper, which at its height was selling over 17,000 copies per week. The equipment wasn’t modern and the conditions were at times difficult, but though not all of the 40 hours – along with the blue-eye – were spent on the premises, we still produced a weekly product which the public wanted to buy.

I can’t remember who Frankie’s favourite trainer was, but I know that it was Snowy Gray who trained one of his favourite two-year-olds, Cheb’s Lad. Frankie followed this one over a cliff and made money. Like the time when, knowing of my associations with a bookie, asked me to quote him a price on a double – Cheb’s Lad to win in England on an Easter Saturday and Herring Gull the Irish Grand National on the following Monday. I went above the quoted odds and paid the price. In fairness, Frankie allowed me to stop the tax, so to speak.

Part of Frankie’s brief as a linotype operator was to handle Paddy King’s GAA copy. Like many others in the place he went beyond the call of duty, not only setting the stories, but also putting the pages together. And he took a particular interest in how the pages which carried reports from Cumann Péile na nÓg, the Dundalk streets league association which was formed in the mid-1960s. Not only that, he soon got involved with the running of the Marian Park team. We clashed on occasions, me having charge of the Carrick Road.

Speaking outside The Redemptorist Church last week, one of his protégés, Benny McKeever, who would graduate to the Clan na Gael seniors, leading them to victory in the 1985 championship, said he knew of no-one more enthusiastic than Frankie. “He was a great organiser, making sure we were always well togged out and turning up for training sessions and games.”

He wrote the Marian Park match reports, and when, back a number of years ago, the Cumann celebrated an anniversary, he put his thoughts together on all that had gone before, for which he was rightly acclaimed.

He brought the same enthusiasm to bear on community events, and when his Marian Park neighbours, Jimmy Bellew and Seamus McGuinness, fronted a mighty surge, leading to them becoming a deafening voice at local council level, he was prominent in the background.

I visited Frankie at his home a number of years back in the company of former colleagues, Gerry Prendergast and Gene Conroy. His sight had almost failed by then, but with the help of modern technology, carers and a wonderfully dedicated family, all three generations, he could lead a full life, which, of course, included having a daily bet on the horses.

Jim Ryan’s Sunday morning programme of classical music and John Murphy’s broadcast from Oriel Park and other venues, both going out on Dundalk FM, were among his favourites – neither of the lads failed to mention him whenever they were on air.

It says much for Frankie’s resilience and zest for life that he maintained his interests right up to his recent hospitalisation.

The best tribute I can pay to Frankie is to say he was a lovely, lovely man.