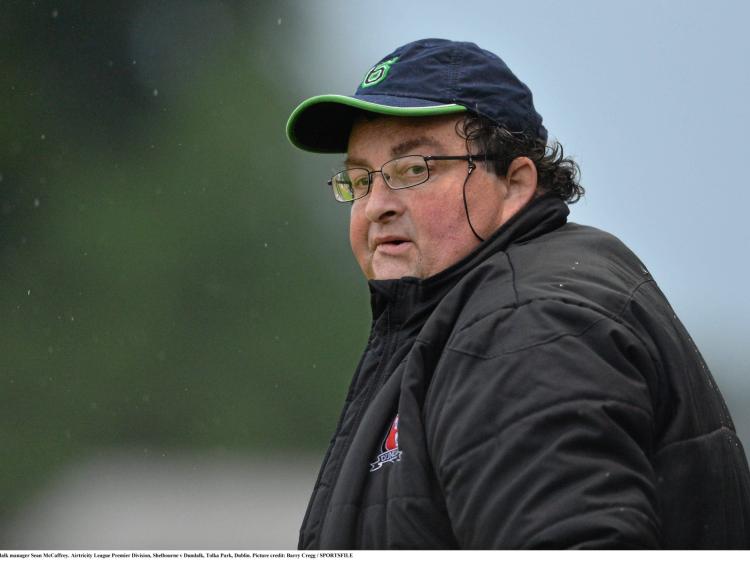 McCaffrey, a former Dundalk FC manager, passed away a little over two years ago and an organisation in his memory was formed shortly afterwards with the aim of helping young players in the greater Monaghan area.

Their first major event was held at tonight’s venue last year with education being the theme of the gathering, while 2020’s version has mental health as its core discipline.

Paul Smyth, an FAI ETB course coordinator who works with Dundalk-based players, is a driving force behind McCaffrey’s Foundation and has issued a wide welcome to anybody interested in coming along to the event, which will be compered by CBS Primary School teacher Tom O’Connor.

“It’s an event that’s open to everyone and if there were people from the Dundalk direction interested, they’re more than welcome to attend,” Smyth told The Democrat.

“We’ve called the event, ‘Let’s Talk Football’. It’s got a mixture of topics, but the mental health side is the main theme with ‘Let’s Talk’ being promoted around mental health, that it’s good to talk.

“It’s our second such event and last year we had Mark Scanlon, Pat McGibbon, who previously played for Manchester United, Tom Mohan and Aaron McCarey, with the general theme around education.

One week to our event!
We would like to announce our host for the Show @boscoisalive
A school teacher by trade, the Monaghan native also works for @ExtratimeNews. He will conduct the interviews with @Keith_Fahey & @dougieno8
Get your ticket below https://t.co/FO032fdEgN pic.twitter.com/OPNCpgFWeg

“It was too good of a night not to make annual and when we were looking at what approach to take this year, we felt the mental health theme was a common issue.

“We then looked for people who we could get down to tell their story and I got in touch with Keith Fahey, who had done a couple of pieces relating to his own difficult periods with mental health. When I got in touch he said he’d love to come down and after that I thought about bringing in a mental health service to give a talk, so I got in touch with Shine Mental Health and a guy called Derek Pepper - he’s a regional development officer for Shine.

“He’s going to give a presentation on mental health and positive wellbeing with a football theme.

“The last part of the evening is probably not around mental health, but it’s with Jonathan Douglas, a former Ireland international. It’s going to be about his career. He’s probably never been recognised enough locally, being from Clones, and it’s maybe a way for him to share his career and look at his football memories, as a young player and his journey through his clubs in England and playing for Ireland.”

The McCaffrey Foundation has been a huge success since its first major gathering at the Hillgrove Hotel, which included over 400 guests, with Robbie Brady and John Delaney chief among them.

Since, initiatives have varied from the formation of a link with the renal unit that treated Seán at Cavan Hospital and Animal Welfare, yet its primary design is to provide for young footballers, with various forums, coaching manuals and support in the form of finance and local equipment being given to clubs competing in the Cavan/Monaghan underage leagues.

“We would have good respect among the local football community and the feedback has been great,” Smyth said.

“Seán achieved things internationally and was known across the country, but in Monaghan he had a huge impact because he would have been involved at grassroots’ football; he just had a major impact locally.

“When he died there was a sense that we had to do something in his memory and often you see an event or something like that as the way of doing it, but we felt a foundation, using Seán’s legacy to try and help local football, would be the best way.”

He added: “You find that there is a lot of pressure on young players to achieve or pressure on themselves to go as far as they can in the game. That pressure brings consequences or knock-on effects which get them down or they find difficult stages of their careers.

“So I think mental health is a very important topic to talk about and I would always be one to say that communication and being open, to coaches and those involved, is important so that issues can be talked about.”