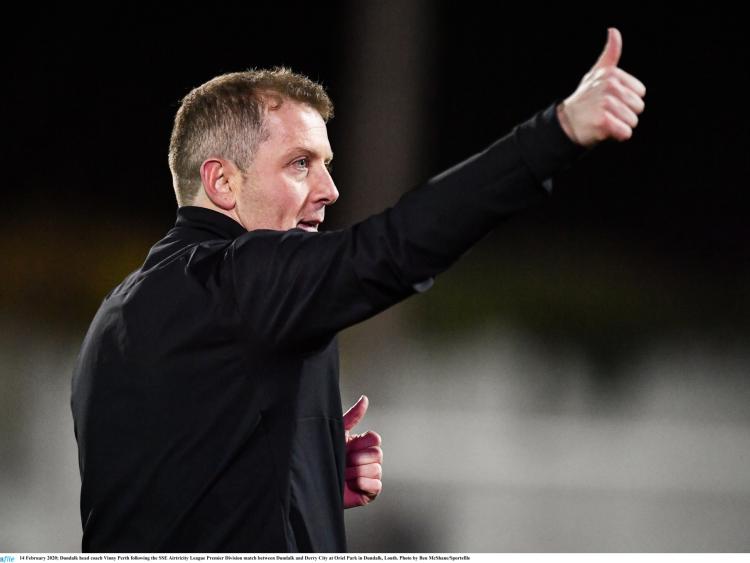 Vinny Perth believes that his Dundalk FC side are “built on away performances,” as they prepare for their first away trip of the year. (Pic: Sportsfile)

Vinny Perth believes that his Dundalk FC side are “built on away performances,” as they prepare for their first away trip of the year, taking on newly-promoted Shelbourne at Tolka Park this Friday night.

That is despite the fact that The Lilywhites haven’t lost a home league fixture since August 2018, with Perth very much of the opinion that Dundalk save their best form for when they’re on the road.

“I think we’re probably undervalued for our away performances, particularly last year,” he said.

“When we beat Sligo away and Waterford away, they were actually our best two performances of the whole season. Obviously, a home is a home and we do want to win, but I feel we’re built on away performances and we have been for a number of years.”

Dundalk were without five first-team players for their opening night win over Derry City at Oriel Park, with both Patrick McEleney and Georgie Kelly late withdrawals from the squad.

However, neither injury is believed to be serious, while John Mountney, who missed the Derry match and much of pre-season due to an ankle problem, is all set to return to training this week.

“Georgie tweaked something in his back and Patrick felt his achilles, so we just couldn’t risk them. We pushed people so hard in pre-season and the injuries have caught up with them,” Perth added.

“He (Mountney) should train maybe Monday or Tuesday, so we’re very close to full fitness. He needed a clean-up on his ankle and we allowed that because we were thinking, we’ve enough numbers. It’s gone against us tonight, where we’ve five missing, but that’s just the way it goes.”

Still awaiting his introduction to the Dundalk supporters is Serbian winger Stefan Colovic, who will don the number 22 shirt. The reason for the delay is that his work visa hasn’t yet been processed.

“We’re waiting on Stefan’s work visa to come through. That could be in the next couple of days, or it could be a week, we don’t know. It’s a sporting work visa, so it will be a bit quicker than the normal visa, but we’re at the mercy of people in those offices,” continued Perth.

One player that won’t be needing such a visa is Taner Dogan, with Perth disclosing that the American, from Harvard University, will not be joining the club following the conclusion of his trial.

“He has gone home, but he’s someone we’ll keep in contact with,” said the Dundalk manager.