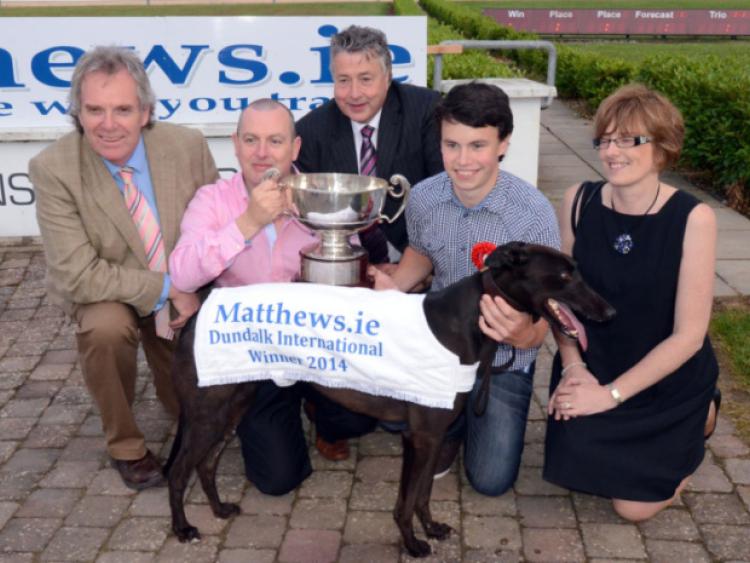 The Matthews.ie International, the feature event on the second half of Dundalk Stadium’s dual racing programme on Saturday last, threw up a surprise result.

The Matthews.ie International, the feature event on the second half of Dundalk Stadium’s dual racing programme on Saturday last, threw up a surprise result.

Sidarian Blaze and Boylesports Hero were the major fancies going into the race, while Mind The Net was the subject of a serious punt on the night of the race.

All, however, were eclipsed by Metro Jack, a 10/1 chance trained by Peter Cronin down south and owned by Dublin publican, Larry O’Shea. Neither the trainer nor the holidaying owner were present, but that wasn’t to suggest connections didn’t give the red-sheeted Metro a chance.

A race that was far from trouble-free ended with the minimum distance dividing the winner and Boylesports Hero, who made a tremendous effort in the home straight to peg back the lead Metro Jack had poached after turning at the bottom of the back straight.

The entire field was bunched together at the third bend after Mind The Net, Boylesports Hero and the favourite, Sidarian Blaze had made progress having been denied a clear run at the first turn.

Crucially, Metro Jack had the inside, and he made the best of his pitch to open up a lead on the run to the line. He had just enough in reserve to hold off Boylesports Hero’s late run. Mind The Net made up ground when eventually getting a clear run, but the 5/2 second-fav never really threatened the one in front.

Sidarian Blaze met with trouble at the second bend, and having led for a while in the back straight, 33/1 chance, Atitboy faded to finish last. Shelbourne Park record-breaker, Paradise Madison never really showed with a chance.

The probability is that Saturday’s field, with the possible exception of Paradise Madison, will contest the Boylesports Irish Derby, due to get underway next month at Shelbourne. Before then, the Irish Sprint Cup will be decided at Dowdallshill, the first round heats scheduled for this weekend.

There were eight finals for graders, along with three Opens, on the International supporting card, and fair to say, it will be some time, if ever, before several of the contestants see another graded race. Like Colmcille Olly, for instance....and Holycrossbigmike, as well.

The first-named, long held in high regard by the Anthony Rooney kennel in Balbriggan but until recently lacking consistency, got everything right in the A4/A5 Matthews.ie 525 decider, and the outcome was an all-the-way win in a record-equalling 28.31.

Holycrossbigmike was odds-on to keep his unbeaten record intact in the Baby James Hynes A2/A3. Frank Courtney’s charge had dipped under 29 seconds in each of his three previous races, and in justifying favouritism did so again, stopping the clock at 28.39. The heavyweight was a real eye-catcher, as indeed was the runner-up, Congress Debs, the Drogheda-based tracker whose strong finish got him to within threequarters of a length.

There was a locally-based winner of the L’Isle De France 525 decider, Valeries Courage, trained on the Cooley Peninsula by Peter Noone, hitting back to deprive Sheikh Mahead right on the line.